The BTB countdown clock is down to a handful of days until the season starts for the Cowboys against the Redskins. We no longer have to count months or even weeks. We're counting days, and pretty soon we'll be counting hours.

Most of us have been waiting for this season opener for almost eight months. Be strong my friends. The event we’ve all been drooling over is tantalizingly close.

You’ve done your homework. You've devoured every season preview publication, starting with the most excellent MSP Cowboys Annual (which you can still order here). You’ve scoured the internet for players on the waiver wire and you've followed the roster cuts like it was the real NFL Draft. There's only one question left: how good are the Cowboys?

In the last few days, many a pigskin pundit has released his version of the NFL power rankings heading into the 2010 season. Power Rankings! Some people think they are the greatest scourge to have visited Pro Football, others can't help but pore over them, dissect them and have heated arguments about them.

Time now to dispense with the pretense and commence with some real football. Here are the first power rankings heading into the 2010 NFL season.

It's not how you start it's how you finish

The table below is a summary of the power rankings we tracked last year and how the four NFC East teams were ranked week by week. May this serve as a cautionary tale not to start fast only to end with a whimper. Appropriately, the Giants waved Guy Whimper on September 4th this year (that one was just too hard to resist). 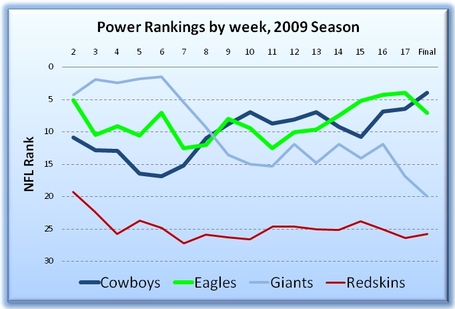 Without further ado, here's what the pigskin pundits have to say about the Cowboys heading into the 2010 season.

Pete Prisco at CBSSports.com: 2nd.  "Their offensive line has injury issues, but there is too much talent on this roster to rank them lower. Getting back 20 of 22 starters means something. Wade Phillips is likely coaching for his job again."

ESPN.com: 4th. "The debut of WR Dez Bryant in a game has taken almost as long as the Cowboys took to build the new stadium. (Clayton)"

WEEI.com: 5th. "The Cowboys are the team to beat in one of the best divisions in the NFL, the NFC East. The team’s biggest concern is their aging offensive line that needs to protect QB Tony Romo. Dallas has loads of talent on both sides of the ball and Jerry Jones’ team has a legitimate shot of being the first organization to host a Super Bowl in NFL history."

Foxsports.com: 6th. "This has been a shockingly silent offseason in Dallas considering expectations entering one without a salary cap. But maverick owner Jerry Jones just couldn't help himself in the draft once enticing WR Dez Bryant starting slipping in the first round. In Bryant, Dallas added a major weapon. But at what expense? Dallas did not address their OT hole left by Flozell "The Hotel" Adams, instead hoping Doug Free can hold down the spot for a full season. Tony Romo sure hopes he can."

Don Banks of SI.com: 8th. "The Cowboys will be one of the featured teams in the yearly debate about the significance of preseason results, because Tony Romo and the Dallas first-team offense looked completely out of sync in August. Maybe they'll flip the switch Sunday night against the Redskins and wipe away the summer doldrums. But if they don't, the sky will be falling in the Metroplex by mid-Monday morning."

2. Blogs & Other Media or Stat & Computer based rankings.

TSN.ca: 2nd. "QB Tony Romo has a wealth of offensive options, including a three-pronged rushing attack and a deep receiving corps that includes last year's breakout WR Miles Austin, TE Jason Witten and, perhaps ready to make an impact, first-round WR Dez Bryant. If the aging offensive line can stay healthy, they'll score. A lot. Defensively, Dallas has a strong unit, with pass rusher DeMarcus Ware, NT Jay Ratliff and ILB Bradie James among the leaders. If the safeties can hold up, the 'Boys are in business."

WhatIfSports.com: 3rd. These guys simulate every possible match-up in the NFL 100 times, and use the winning percentages from those nearly 50,000 games to evaluate every team, with updated rosters and depth charts.

Drattek.com: 3rd. "The Cowboys have the talent and confidence to make the march to the Super Bowl. But then again, they've had that each of the past 3 or 4 seasons. It just seems that now it appears they have both the belief and the mental fortitude to pull it off. But the offensive line ( and by extension, Tony Romo )for Dallas is the key component. If they make it, at least they won't have to "march" very far. If they don't, and ruin Jerruh's Super Bowl shindig, look for LOTS of heads to roll. That's probably why they won't ultimately make it to the big game. And by the way a reminder to Houston fans all amped up by the pre-season thumping they gave to the Cowboys: September 26th is the rematch, and this one actually counts. Good luck."

ColdHardFootballFacts.com: 3rd. " A Super Bowl host hasn't made the playoffs since the 2001 season, when the Tampa Bay Bucs lost in the first round. The 1998 Dolphins were the last team to win a playoff game in their Super Bowl hosting season."

ProFootballWeekly: 4th. "Is it time to start worrying about Tony Romo and the run game?"

ProFootballTalk.com: 5th. "A glaring weakness at left tackle ultimately could keep the Cowboys from playing in the Super Bowl they'll host." Huh? Have you been reading too much in your own blog again, Mr. Florio?

Betus.com: 7th. "Dallas has mostly struggled this preseason but still have arguably the game’s best front seven on defense – and one of the most potent rushing attacks around."

WalterFootball.com: 8th. "The Cowboys have the most talent in the NFL. Unfortunately, Tony Romo doesn't care, Felix Jones has no idea what's going on, Roy Williams keeps sucking, and Wade Phillips is as confused as ever. Here's to more high blood pressure for Jerry Jones come January!" Here's a writer who is barely hanging on to the thread of reality, and is in serious danger of quickly disappearing from this power ranking roundup. Again.

Here's how the NFC East fared: