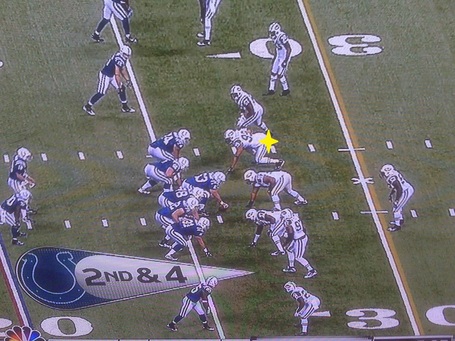 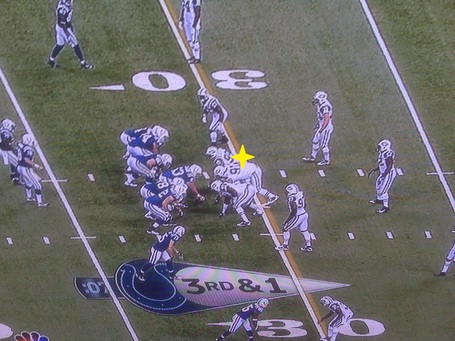 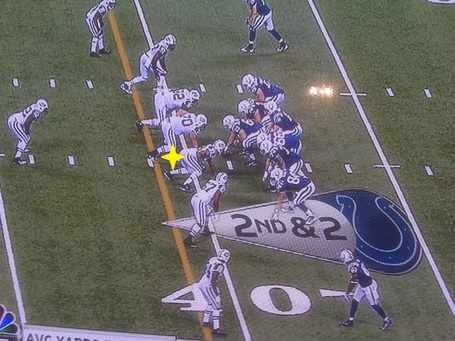 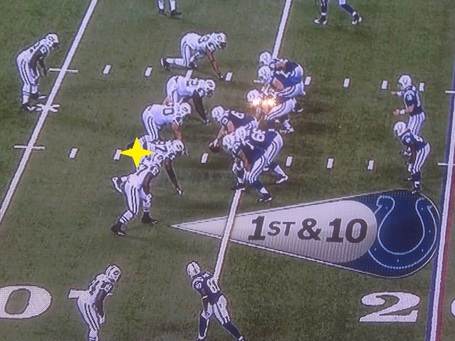 In fact, Collinsworth who is usually pretty good had a comment that showed just how much expectations effect perception. At one point Collinsworth commented on the Jets DL

I’ll tell you, the one thing you notice in watching the Jets defensive line is they basically have 3 defensive linemen in there that can cover 4 gaps which is pretty unusual , they are big strong guys in there, Pouha, Mike Devito, Shaun Ellis … these guys right here (below is a screen capture of the telestrator) … 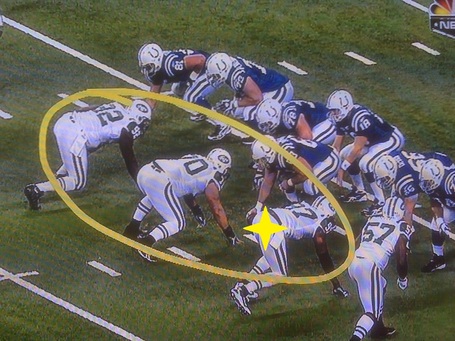 
Now I’m not sure what Collinsworth was talking about for 2 reasons. First, I think he meant they have 3 DL who can take on 2 gaps (??). 2nd … see the guys Collinsworth circled.. that’s Ellis (290), Pouha (325), and Pace(265). Collinsworth either can’t tell the players apart or he’s seeing what he’s expecting to see.

Personally I thought what was interesting was that Jets were using DL that are supposedly too small. But whatever … everyone knows you need ‘planet theory’ DL so that’s what he saw I guess. Or maybe what’s interesting is the best analyst in football can’t wrap his head around a 250 lb DE … that the concept is so hard to grasp that he literally can’t see it?

A new scientific understanding of perception has emerged in the past few decades, and it has overturned classical, centuries-long beliefs about how our brains work … as scientists set about analyzing the signals, they found them to be radically impoverished. Suppose someone is viewing a tree in a clearing. Given simply the transmissions along the optic nerve from the light entering the eye, one would not be able to reconstruct the three-dimensionality, or the distance, or the detail of the bark—attributes that we perceive instantly … The images in our mind are extraordinarily rich. We can tell if something is liquid or solid, heavy or light, dead or alive. But the information we work from is poor—a distorted, two-dimensional transmission with entire spots missing. So the mind fills in most of the picture.

It’s honestly weird. Every since I started paying attention to advanced statistics I’ve noticed it more and more. People really see what they expect to see. In the 2nd NYG Jimmy Johnson saw play action passes that weren’t there. Calvin Pace lines up and Collinsworth sees Mike Devito. It’s crazy.

And for the record, this wasn’t only because the Jets were playing Indy. The Jet’s used the same formations against Pitt.

Second observation, the announcers mentioned this in the Eagles game. ESPN provided the stats: the Packers are using the nickel as their base defense.

According to ESPN Stats & Information, the Packers used at least five defensive backs on 57 of the Eagles' plays. (The other three came in short-yardage packages.).

The announcers said Capers was (again, I paraphrase) ‘inviting the other team to run’. In the Colt’s game the announcers quoted Rex Ryan as saying ‘we have to let them run, when Peyton hands off he’s the same as other QBs’. Maybe I notice this stuff because I wonder why NFL teams don’t do it more.

I wonder if teams wouldn’t benefit from inviting teams to run more. Allow then to rack up successful (but low value) runs at the expense of more valuable passes.