Grading the Cowboys Corners: It's Not Pretty

Share All sharing options for: Grading the Cowboys Corners: It's Not Pretty

A little less than a year ago, Cowboys cornerbacks Mike Jenkins and Terence Newman were suiting up for the Pro Bowl. That seems like a long, long time ago. This season the Cowboys pass defense dropped very close to the bottom of the NFL, and it's no secret that the Cowboys' corners played some pretty bad football. But was that really all their fault?

Conventional wisdom holds that bad safety play significantly impacts your corners. If your safeties struggle, your corners struggle as well. BTB blogger GunsUp noted that "It can't help the corner's state of mind, knowing the FS has no clue about what is going on. If you have no confidence in help over the top, your coverage will suffer."

I don't know of an easy way to prove that correlation with stats, but after the break we look at what happened to the Cowboys secondary before we take a detailed look at the individual corner performance. Brace yourself.

Once again, we'll use the Profootballfocus (PFF) data for this review. Please refer to the safety position review if you are unfamiliar with their metrics.

The soft spots in pass coverage. 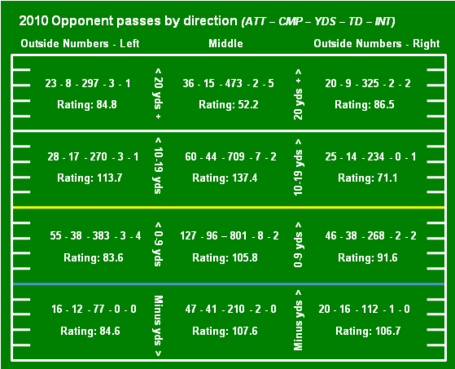 Have you ever wondered whether opposing quarterbacks were targeting particular spots on the Cowboys defense, and how well they were doing it? No? Well I did, so I reverse engineered our opponents' game-by-game stats for the passing game at PFF to come up with the  graphic on the left.

The graphic breaks down the regular season passer rating of our 2010 opponents by pass direction and -distance.

The 2010 Dallas defense ranked 29th in defensive passer rating, and the numbers on the left give an indication as to why: opposing QBs could pass with impunity almost anywhere on the field, and were arguably only limited by their own accuracy, not so much by the Cowboys pass defense. Even second- and third-tier quarterbacks such as David Garrard, Rex Grossman and Shaun Hill lit up the Cowboys in 2010.

Now, while I think this chart is pretty impressive, it has so many numbers on it that it is not immediately clear what it's key message is, so allow me to break down the numbers into more manageable pieces.

In 2009, the Cowboys ranked 16th in the league with a defensive passer rating of 83.5. One year later they were down to 29th with a DPR of  92.8. What changed is that the Cowboys gave up longer throws, for more yards, more often.

Teams have traditionally gone after the Cowboys underneath, exploiting weaknesses in the Cowboys linebacker corps, and it was no different in 2010. The table shows that on the underneath passes of nine yards or less, the Cowboys maintained their very high defensive passer rating (a rating close to 100 is nothing to be proud of). They gave up fewer yards underneath, but also gave up more TDs which kept the DPR basically unchanged.

But the big change versus 2009 came in the long passes of 10 yards or more. The DPR here jumped by 30 rating points, with the Cowboys giving up almost 800 more yards on basically the same number of pass attempts as in 2009. In 2009, 38% of the passing yards allowed by the Cowboys defense were generated by passes beyond the yellow line for 10 yards or more. In 2010, that percentage jumped to 55%.

What all this shows is that where the Cowboys' opponents previously could simply dink and dunk with relative ease, this season they could also use the long pass with a very high chance of success. And now a little more eye candy for the football stat geek’s soul. Here's a graphic comparing the 2009 and 2010 completion percentages and YPA by passing game quadrant: 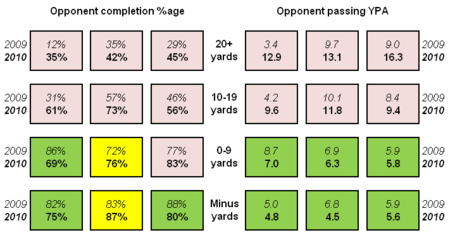 These stats perfectly underline the soft spots in the Cowboys coverage, perfectly described by our own rabblerousr in his Five Moments series:

Later, in that game, Cutler hit unheralded jitterbug WR Johnny Knox on a 59-yarder when safties Ball and Gerald Sensabaugh opted to follow Hester on a crossing pattern, leaving Mike Jenkins without the deep help he was expecting. Suddenly, the Cowboys had to prove that this play didn't signal a fundamental weakness but was a singular incident. For the rest of the season, they failed to do so, and opposing offensive coordinators preyed on the soft middle of the Dallas pass defense like starving lions on an injured wildebeest.

Terence Newman: The veteran corner was targeted 98 times by opposing quarterbacks, the 15th highest total among the 100 qualified corners and allowed 64 (8th most) of those throws to be caught. 914 yards allowed rank T-New 95th among the 100 corners and his 'burn rate' of 65.3%% ranks him only marginally better at 71st. He is tied for eighth in interceptions, but also tied for 74th in TDs allowed. All this results in a DPR of 91.1, 59th in the league.

Mike Jenkins: The third-year pro gave up the most yards of any corner in the league. After picking off five passes in 2009, he only managed one this year while giving up 6 TDs. His DPR of 122.6 is not just one of the worst rates in the league, it is also higher than any passer rating achieved by a quarterback in the NFL this season.

Orlando Scandrick: The Cowboys slot corner saw about half the playing time of the other two but still saw opposing quarterbacks going after him 77 times. Considering that as the slot corner Scandrick doesn't have the sideline to help him in man-to-man coverage, his numbers could be viewed as a little more positive than the two other corners.

Below are the PFF grades for the Cowboys' corners. Jenkins ranks 92nd, Newman 86th and Scandrick 36th.

Orlando Scandrick is the pleasant surprise in an otherwise highly disappointing cornerback crew, but his overall grade is boosted by the three sacks he recorded in 2010. Still, a positive grade amid an atrocious secondary is quite a feat.

Jenkins' already bad numbers are further hurt by his eight penalties which drive his overall grade below Newman's. TNew, in spite of having the best DPR of the Trio is graded as the worst of the three corners in pure coverage performance.

Bryan McCann only played on 130 snaps. He was targeted 11 times, famously intercepted an Eli Manning pass for a pick six, but the remaining 10 passes thrown his way were caught by opposing receivers. His overall grade: -2.4.

At then end of the day, the corner grades are the most ambiguous grades for any position on the Cowboys roster in 2010. Is the corner play of 2010 a result of an overall breakdown in the secondary, coupled perhaps with a slump in form of both corners, or did they both regress at the same time, for whatever reason? The answer to these questions will determine a large part of the Cowboys' offseason strategy:

If it's the latter, then the Cowboys might dip into the free agency pool (if and when that's possible). Below are the top ten free agent corners ranked by their PFF grade in 2010. Should the Cowboys pursue one of them?