I stood in the same place as pretty much everyone else, the line of thought of: he coached the average-to-bellow average Cleveland defense?

And that's a good way to start this post, as soon as he became the Defensive Coordinator on this team, I began a process of acquiring tape of games to see what his defense was all about... And wow, it's all about movement and about not showing what you really mean.

Two games stood out, the 1st reason is because they were great performances by the defense, the QBs couldn't find a comfort zone as they were always looking were the pressure would come from. And the 2nd because with the passing teams in our division (Eagles and Giants) and with the way in which our passing defense played last year, there's a big need for improvement in that area. The games were the one against the Saints in New Orleans and against the Patriots, both victories by the Browns.

So, what exactly did I chart? I went from the defensive alignment of the DLine and LBs, to the coverage of the safeties, to the unexpected blitzers, to the amount of rushers per passing play and the kind of gap responsibility.

So, let's get to it, the numbers from both games:

When we talk about a defense that shifts so much between even, uneven and unexisting fronts, the first thing that you have to do is identify the DLineman and LBs, and I went with a very simple line of thought: if he has a hand down, he's a DLineman. Yeah, I know, I'm not saying something new, but when you see Rogers surrounded by nothing but LBs and a LB (usually Roth) puts his hand on the ground, being the only DLineman, you're seeing something complex and you just try to simplify.

The were many schemes and there were differences from snap to snap even when they kept the same personnel and scheme, we're talking about how they would use the 3-4 in the Parcells way (dancing elephants): 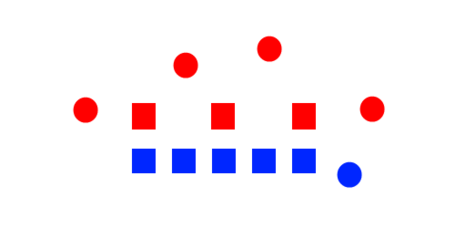 In this kind of play we see the DLineman stutter stepping as they make time for the play to develop and read what they have to do, Rob Ryan would call this play when his read was a run.

And in the next snap we would see something like this: 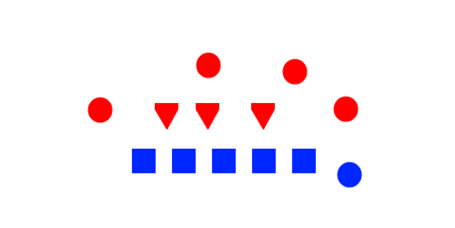 A one-gap attacking scheme in which as soon the QB takes the snap the DLineman attack their gaps with a sudden first step and the use of arm techniques like the arm-over or rip. Rob Ryan calls this play against the run and pass, and he can also add a twist, they may line up in one of those and prior to the snap motion into the other, with the movement of the heads of the center and QB as first direct results.

So, considering that, just because I'm saying that they deployed a 2-4 "X" amount of times, it doesn't mean that it's exactly the same scheme or personnel, that's how complicated Ryan's defense is. The Cowboys defenders will need to study. A lot.

The first thing that immediately jumps out at you is the amount of "small" fronts that Ryan called. The 2nd should be the differences between both games.

1. Evidently, Ryan doesn't believe in the size theory, there were times in which he rushed 2 LBs against the 5-man pocket and forced bad throws. He believes in quickness and crowding the short and intermediate routes.

2. He adapts. The Patriots sport a fundamentally sound OLine, so he had to beat them with preparation and a lot of movement and that called for more light sets. The Saints have a more physical unit and he had to go with a heavy and light combination to keep them off balance.

This is another interesting area, because Ryan likes to play with his safeties roles. They had interchangeable roles and again I had to simplify because Ryan's work is too complex to follow and the camera angles weren't of much help. But make no mistake, a safety, in Ryan's opinion, is going to be in deep coverage and they need to run and change directions with ease (No Roy "Thong" Williamses).

So, from what I saw, I differentiated the types of plays in 2, deep 2 (be it in quarters or cover-2 or cover-6) and cover-3 with one safety moving closer to the line to take away the short to intermediate routes (it doesn't matter if his assignment is a TE or WR, that's why they have to be able to run).

T. J. Ward is a player, that's easy to see, he can hit, wrap up and bring down in pretty much every attempt, he can run and turn, and has really solid instincts. Elam is worse in every aspect and IMHO is very comparable to Sensabaugh. And Mike Adams played a lot as a 3rd Safety in passing situations.

Based on scheme, there won't be much of a change from what we saw under Pasqualoni, Ryan likes to keep the play in front of his defenders and he makes a point of jumping routes and make plays on the ball, but only if there's contain behind them. Now, I wouldn't be surprised to see Campo remain, but with a leash.

This is another area were Ryan likes to play with mirrors to hide the points of attack of rushers, but there's a common denominator: Ryan likes to rush from the inside with delayed rushes from the ILB, or Safeties and CBs stacked behind a DLineman, in one snap they may lineup in this formation and go out in coverage and in the next snap lineup again and rush the QB.

This kind of rush comes handy with all of the light schemes, some LBs can go out in short to intermediate coverage, while the others or DBs blitz the brains out of the OLineman and QB. But there's a thing that you do need, and it's DLineman that have a quick first step and force movement right after the snap in order to open gaps.

Ryan didn't have much of that and several of his blitzes were stonewalled by OLines that weren't moving, which forced Ryan to dial reserve his blitzes and to only bring them up as a change-up.

Don't let those numbers fool you, in all of their light formations the expected rushers are the DLineman and OLBs, their bigger guys, I considered every time in which someone that wasn't supposed to rush attacked the LOS, for example, in 0-4 formations I saw how Ryan sent both OLBs in coverage, and both ILBs and a safety attacked, that's one ILB and S snap in my book.

Against a good passing attack do you want to bring quick pressure or a crowded backfield for the QB to pick apart? Ryan likes to play with both ideas, as is evident by what you have read above, using different schemes and a wide array of blitzes, but in the end how many guys are responsible of going after the QB's head? Let's go to the numbers:

If there's something that we can say about Ryan it's that he's consistent in being hard to predict, his high number of 3-man rushers was something that I was expecting to be lower, not the scheme that he ordered the most in both games.

For those wanting a DB with the 1st pick, now you have another reason to join on the pressure player bandwagon.

As I wrote above, Rob Ryan comes from the Parcells tree and as such employs concepts of his defensive schemes, but he also adopted some of Belichick's concepts of mixed fronts and mixed all of them with his own ideas of interchangeable DLines. In one snap a player along the DLine may have a 2-gap responsibility while the other guys have 1-gap to take on, in the next snap they all can be in 2-gaps and in the next a full fledged 1-gap attacking scheme is on. It doesn't matter if the Defense is expecting a run or pass, it just adds to being hard to predict.

How can you tell if the DLineman are aligned in a 1-gap or 2-gap formation? Well, again I had to simplify, if I didn't see a DLineman stutter step a bit to see the play develop and he attacked the shoulder of an OLineman, that's a one-gap DLineman. A way to notice 2-gappers is that they play with their heads right in front of the head of the OLineman in front of them, that way the defender can see the play develop around his assignment and act accordingly (for example, pushing his assignment towards one of his assigned gaps). So, if more than half of the DLineman played 1-gap, that's one snap for the 1-gap scheme. The same happens for 2-gap snaps.

In here you will find another example of how Rob Ryan isn't a definite believer of the size measurable. Their bigger player is Shaun Rogers and I was looking at the number of times in which he played with a 2-gap responsibility. The number is 0. Ahtyba Rubin is a big guy in his own right (6-2 and 330), he's the starting NT and he's the guy that Ryan looks up when he wants a 2-gapper in the middle, but he can also play as a 1-gapper because he has a strong and quick first step (there's a play in which he followed and tackled Woodhead like 10 yards away from the LOS).

Out of everything that I saw, there isn't ONE thing that makes me doubt what I knew all along, Rob Ryan is going to love the Rat in the Nose.

The other Ryan agrees.

Just for the fun of it, I went through the Jets vs Patriots game tape, to see how his brother's philosophy matched that of Rob against the same rival and his chart reads like this:

The big thing, and it's easy to notice, is that Rex Ryan had better toys to play with, especially along the DLine and it shows, he played less with mirrors and believed that his DLineman would do a good job of bringing pressure from the middle and called for blitzers to come around the pocket.

The 2nd thing is that Rex Ryan is a bigger believer in the one-gap attacking scheme. He can use 2-gappers from time to time, but mostly on heavy packages and does a good job of keeping the same personnel, so he has several players that can play the run and bring pressure.

And I found that he would also love to have the Rat in the Nose. In this game I found impressive the way in which he used Shaun Ellis, he's a 5-technique DE for the most part, but in this game he lined him up everywhere, from the 0-technique (with his head right in front of the center's head) to the 5-technique (head in front of the OT). He's smaller than Ratliff.

Are you impatient to see all this in motion in Training Camp?