We've noted how the Dallas Cowboys redzone woes doomed them against the New England Patriots this past Sunday. One thing you want to do is run the ball effectively in the redzone. The Cowboys haven't been able to do that. So what's the next best thing? Line up in your super-heavy-jumbo-power package, and throw the ball.

On second and one at the Patriots one-yard line, the Cowboys lined up with three tight ends and brought in nose tackle Josh Brent as a blocking fullback. John Phillips and Martellus Bennett are covering the offensive tackles and Jason Witten is lined up in a wing position. 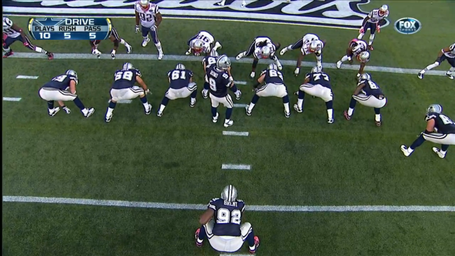 Another view that shows Tashard Choice as the tailback and the Patriots with eight defenders on the line. For all intents and purposes this definitely feels like a power run with Brent leading Choice to the right side. 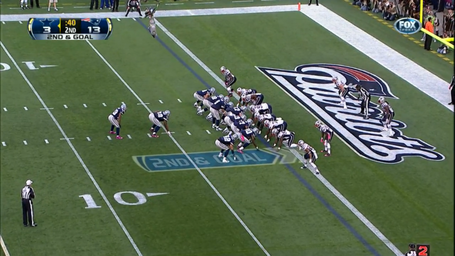 At the snap of the ball, Tony Romo drops back, Choice starts his release to the endzone on a pass pattern while Phillips does the same on the left-side of the line. Witten is actually motioning across the line and averts a near disaster. Tyron Smith has given up ground to his defender and is pushed back into Witten's path. Witten has to put his hand on Smith's back and does a mini-hurdle to get past him on the way to his route. This play almost collapsed before Romo could make a passing read. 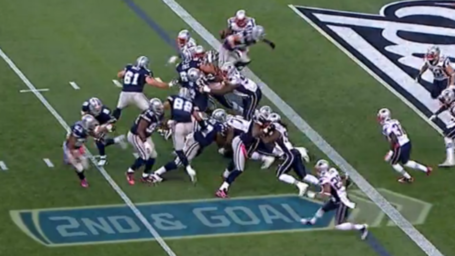 Good thing Witten is an athlete because he does make his way across the line for a short dump-off from Romo, but even then the touchdown isn't assured. The Patriots did a great job of committing to the run while simultaneously not forgetting about pass coverage. Witten got the pass but still had to power his way into the endzone. 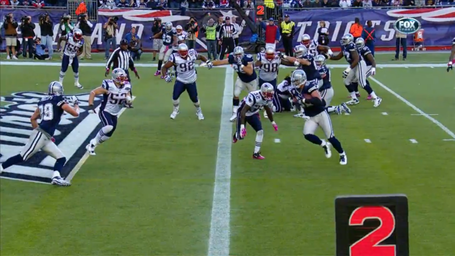 All's well that ends well, as Witten converts the Cowboys only touchdown on the day. 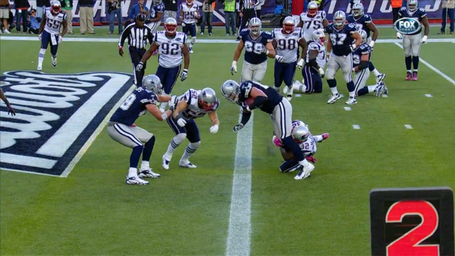 I like the design of this play, but it's pretty symbolic of the Cowboys vote of no-confidence in their running game, especially the power game in the redzone. It's troublesome when a team doesn't think it can convert one yard by busting it up the gut. I commend Garrett for at least finding a way to get it in the endzone on this occasion, but from above you can see how close these plays can come to blowing up.

Perhaps the presence of DeMarco Murray will pump up the running game. I was fairly impressed with the hard running he did in the Patriots game. I'm looking forward to seeing if his style will prove successful. I know the NFL is a passing game now, but there's something to be said for a team that can get the key yard when they need it, and not resort to trickery.