There were a lot of good things to like in the game the Cowboys played against the Rams. Obviously, the running by DeMarco Murray is at the top of that list. Murray not only flashed speed and vision, he also ran with power. The way he bounced off Rams tacklers for extra yards was a thing of beauty. Also, the blocking of the offensive line, the way the defensive line controlled Steven Jackson; it was a cornucopia of goodness.

But I think the play that I liked the best, and that's saying something considering Murray's 91-yard touchdown scamper was Abram Elam's hit and fumble recovery on Cadillac Williams. Consider that at the time, the score was only 7-0 Cowboys. The Dallas offense had just had a three-and-out and the Rams were driving. On first and ten from the 50-yard line, the Rams dropped back to pass and ran a screen. Check out how well they executed this part of the play. Only one Cowboy defender near the ball with three Rams offensive linemen leading the way. 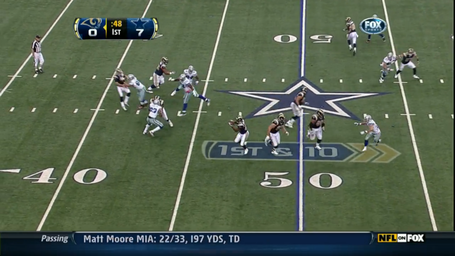 Next thing you know, Cadillac Williams is cruising down the sideline and has picked up 15 yards to the Cowboys 35. Finally, the Cowboys start to converge on him but this play is going to give the Rams the ball with a first down in Dallas territory. Elam is the first guy to contact him, having to fight off a downfield block. 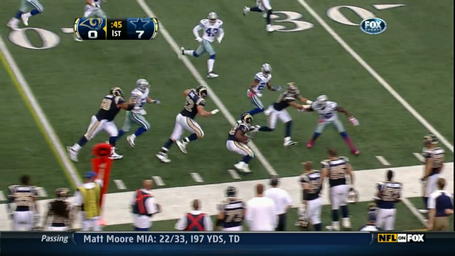 Boom goes the dynamite! Elam lays the wood on Williams, and out comes the football. 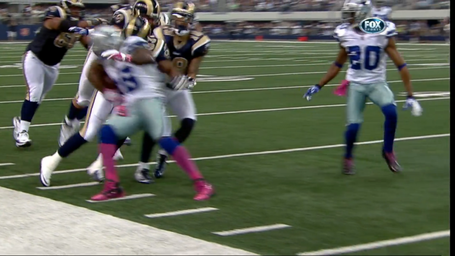 This is a pretty good play already, a powerful hit that dislodges the football. But Elam turns it into a great play, a memorable play. First, he has to get his feet re-established in bounds so that he can actually recover the football. As seen below, no problem. 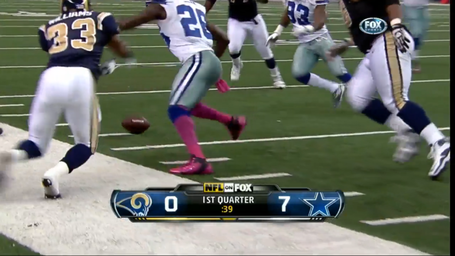 Once re-established on the playing field, Elam scoops up the ball for a Cowboys turnover setting up the offense with good field position. When the ball first came out, I thought it was going to bounce out of bounds. Where Elam hit him on the field, 99% of the time that ball goes out of bounds. Somehow, like a bunt in baseball, it crawled right along the boundary. 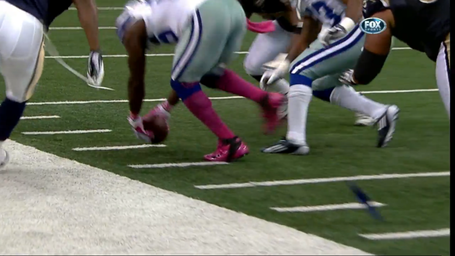 The Cowboys took the ball, and six plays later Jason Witten was scoring a touchdown.

Abram Elam gets the power play of the week.