Projecting 2011 NFL Playoff Teams: Cowboys Have Some Winning To Do

Share All sharing options for: Projecting 2011 NFL Playoff Teams: Cowboys Have Some Winning To Do

One quarter of the 2011 season is in the books. We've seen each team play four games apiece, and probably have a good early idea of which teams are going to be good this year, which aren't, and which teams could go either way.

We share a devilish delight in watching the Eagles self-destruct, we marvel at how the Packers seem to be in a class of their own so far this year, and we collectively hope there is more to the Cowboys' season than the early stats indicate. At 2-2, with 99 points scored and 101 points allowed, the Cowboys look like a middle-of-the-road team. And unless they find a way to win about eight of the remaining twelve games, the playoffs may not be in the cards for the Cowboys this year.

So the question is, which teams look good for the playoffs after four weeks? After the break, we look at some stats to try to get a better feel for where the Cowboys currently stand.

To evaluate which teams could be headed for the postseason, we'll use the Pythagorean Formula. We've used the formula before (for more details, go here) so I'll be very brief: This formula was developed to measure overall team strength, on the hypothesis that a team's true strength could be measured more accurately by looking at points scored and points allowed, rather than by looking at wins and losses. This is the NFL version of the formula:

Using the formula, we'll attempt to project how many wins we can expect for each NFL team based on the results of the first four weeks. Before we go there though, we need to understand exactly how accurate a predictor the Pythagorean formula is in the NFL.

Those numbers show that points scored and points allowed have a pretty strong correlation with a team's W/L record. Now, you could easily say, "Dude, you basically just told us that points and wins are strongly correlated," and you'd be right of course. Using the final scoring results of a given season to project the W/L record of that same season does not require the sharpest tools on the shed. It is like looking at the horsepower of a car, seeing that a given car has 300+ horsepower and the loudly proclaiming, "I predict that this car is going to be fast."

So what we need to do is look at how good the Pythagorean formula was at projecting a team's final W/L record early in the season. And that's just what the chart below does, it plots the the accuracy of the Pythagorean win projections by week as measured by r squared: 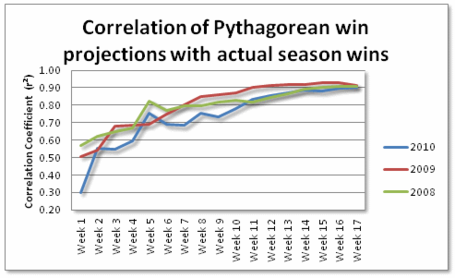 A few things stand out from the chart:

Given that the Cowboys' fortunes are not going to change between now and next week due to the bye, we might as well run the full exercise this week, and not wait for an improvement in week five that may or may not come this year.

With 99 points scored and 101 points allowed, you don't need to be a rocket scientist to figure out that the Cowboys currently look like an 8-8 team. The formula gives the Cowboys 7.8 wins for the season, if they continue at the current pace. It would be nice if the Cowboys were to find a win to win by a large margin for a change - I'm growing tired of a Pythagorean formula that always predicts us at 8-8.

Going by the Pythagorean formula, here is the projection for this year's playoff teams:

Notice how the Cowboys have already played three of the top four NFC playoff teams to a 2-1 record - and that the next opponent is also a playoff contender. But we'll get into the details of the schedule in a follow-up post.

Of course, for any team, you could argue that their projection is impacted (positively or negatively) by the strength of the opponents so far, the injury situation, plain luck or any other factor for that matter. But barring significant changes in a team's performance, the formula is a good early indicator of where the season is headed for each team at this point in time.

And for most of the teams not on the playoff list above, there is still hope. After week 4, 2010 (in what we've already seen was a so-so year for the formula) the Pythagorean win projection already correctly identified eight of the 12 eventual playoff participants: Chiefs, Jets, Steelers and Patriots for the AFC; Falcons, Packers, Eagles and Saints for the NFC. Of course, this sound like a lot, but except for the Eagles, all of the eight teams above also had three wins after week four.

The formula did not project the Ravens and the Bears (each with 3-1 records as well) or the Colts and Seahawks (both 2-2) as playoff teams, but did project the Titans and Vikings (both ended up with 6-10 records), the Rams (7-9) and the Chargers (9-7) as playoff candidates. So while the formula already has a high degree of accuracy after week four, it can also still miss spectacularly.

With all of that in mind, here's how the 32 NFL teams stack up after four weeks: