Tracking: Cowboys Rookie Bruce Carter And The Need For Inside Linebacker Help

Share All sharing options for: Tracking: Cowboys Rookie Bruce Carter And The Need For Inside Linebacker Help

Bruce did a nice job, he really did. He's gotten himself acclimated to playing football in a short period of time. Has not had a lot of practices but you can tell he's a pretty natural and instinctive football player. A lot of what we saw of him on tape coming out of school... made a big tackle in the game on the punt coverage team. Maclin, I believe, kind of broke out in the open and Bruce made a nice angle tackle to get him down, to prevent possibly a big return. He certainly has explosiveness, speed and quickness, and it looks like he's getting acclimated to play football. The more he's able to do the more we'll be able to give him.

Coach, it may be time to throw Bruce Carter into the fire.

For all the planning the Cowboys may have had to attack the Eagles linebackers, it's their own linebacker corps that was beaten time and time again. And unless the official statisticians and I missed something, Bruce Carter didn't muster a single defensive snap on Sunday.

Sean Lee is the quarterback of the defensive front seven. He is the one that relays the calls from coordinator Rob Ryan, the one that puts the players in the correct positions.  For the first time all year, this didn't happen against the Eagles as the leagues number one rushing defense was taken to the woodshed. The lanes for LeSean McCoy carried such little traffic, the city of Philadelphia's considering applying for HOV designations.

Of course DeMarcus Ware was his usual brilliant self, notching four sacks against the elusive Michael Vick, but he may have been the only one. As O.C.C. opined earlier, PFF.com's linebacker grades show the other Cowboys linebackers were horrendous, embarrassing disasters.

Here's how the "middle defenders" (for lack of a better term) graded out:

The table lists the total snaps that each player was on the field for, as well as the number of snaps in which the player dropped into pass coverage. I've included Spencer here because he played almost as many snaps in pass coverage as Bradie James. This was the soft underbelly of the defense on Sunday, both against the pass and against the run.

As the grades indicate, this didn't occur only after Sean Lee went out after punching Mike Vick's helmet. Before he sustained his dislocated wrist, I wrote in my game notes that inside linebacker Sean Lee was having the worst game of his career Sunday night against the Eagles.  He was repeatedly caught out of position in the run game for the first time this season, and he continued to fall for the opponent's first move when in pass coverage.

Sean Lee (-3.6) was one of our most promising rookies a year ago and, while he's surpassed expectations against the run this year, he's consistently graded poorly in coverage. He had his worst game of the 2011 season Sunday night. The Penn State product struggled in both facets of the game, grading negatively against the pass and, surprisingly, the run. He was consistently in position to make plays but failed to do so, missing tackles on both a Michael Vick scramble and a Lesean McCoy run. In coverage he wasn't especially close to Brent Celek who caught a slant for 19 yards with 6:23 to go in the first quarter. The fact his -3.6 grade came on just 20 snaps (before he was forced to leave with a wrist injury) reflects the uncharacteristically poor display of the entire Cowboy defense. A horrible one way to end his season potentially. The worrying thing must be the veterans expected to step up, Keith Brooking (-6.4) and Bradie James (-3.0), were just as poor. Brooking was especially poor, missing two tackles of his own, and looking lost in zone coverage as Philadelphia consistently had success on intermediate routes over the middle (the former Falcon gave up 7-of-8 balls thrown his way for 88 yards). This unit will have better days.

Yet, Bruce never saw the field on defense against the Eagles. Don't get me wrong, I appreciate the work that Keith Brooking did a couple years ago for this team. However, there is no way that any one watching the game could think that any professional linebacker with a pulse could have performed worse than what Brooking did on Sunday night. With Lee already ruled out for Sunday's game against the Seahawks, the Cowboys must come up with a better rotation than James and Brooking all day long. Cowboys fans have feared this scenario since the offseason.

In 14 games played, Brooking and James have only been able to accrue a total of two above average grades from PFF. (Follow the link for a lengthy introduction to the PFF methodology). They currently have the two worst cumulative grades of all Cowboys defensemen. James at -6.8 and Brooking at -7.2.

Undrafted rookie free agent Alex Albright is the only other inside linebacker currently on the active roster. The OLB convert has amassed a grand total of seven snaps played through the first seven games, and none in the last two weeks. There remains the possibility that the Cowboys look to the waiver wire to see if there is a street free agent to sign, but knowing the complexities and responsibilities of the position there might not be any immediate help there.

The Seahawks offense doesn't possess the kinds of weapons where you think this should be a difficult matchup, but one only has to remember what Marshawn Lynch did to New Orleans in the playoffs last year to know that on any given day, anything can happen. Can the Cowboys defense succeed with virtually no athleticism from their inside backers?

In essence, the call for Bruce Carter has nothing to do with his play. It is more an indictment of the other options Dallas currently has at its disposal. Coach Jason Garrett's praise of Carter must be taken with a grain of salt, as just last week he spoke highly of Tashard Choice. Choice was released two days later and currently finds himself with the Washington Redskins. The HC might not have any choice, however, as it is a huge reach to think Keith Brooking and Bradie James can last a full 70 snaps; much less play them effectively.

As Sunday's debacle wore on, I remarked on more than one occasion that out of the 50 or so facets of the game, the Cowboys had performed well in only about four of them. DeMarcus Ware, DeMarco Murray, Laurent Robinson and the punt coverage.

Bottling up Jackson was a great team effort, as there were six defenders closing in on him as he danced around. The first stop of Maclin, however, was pure individual effort by Bruce Carter, as the speedy wideout had an opportunity to punish Dallas heading into halftime. 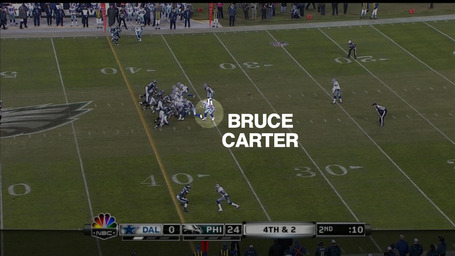 Carter begins the play making sure the outside rusher can't get in on the punter. After holding him off, he releases down field with the rest of his teammates. He starts to the inside of the rusher-turned-blocker but then... 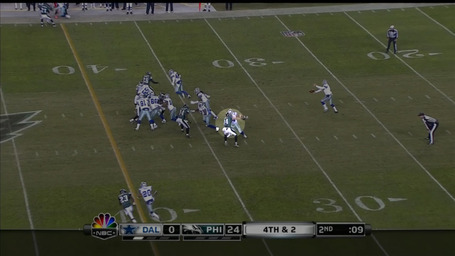 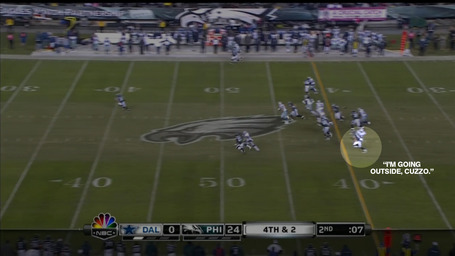 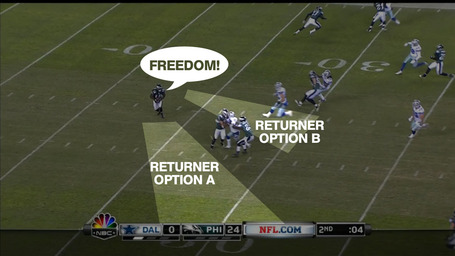 Maclin has two options. He can immediately take the punt to the right sideline and utilize his speed to get up the field, or he can cut inside of the tag-team edge block and draw the remaining defenders towards the middle. He chose Option B. 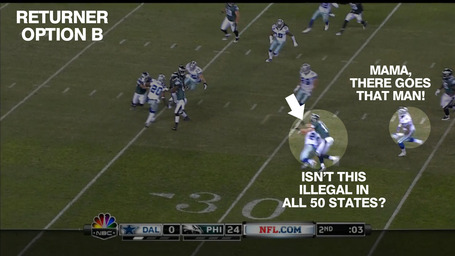 An illegal block (surprise, not called) in the back almost sprung Maclin to the outside right, but Carter zeroes in on the ball carrier despite the failures of his covering teammates. 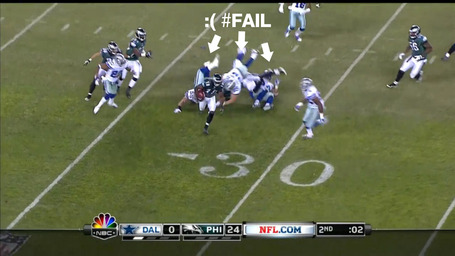 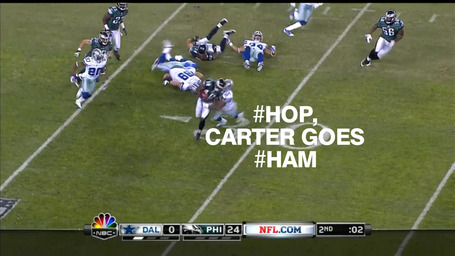 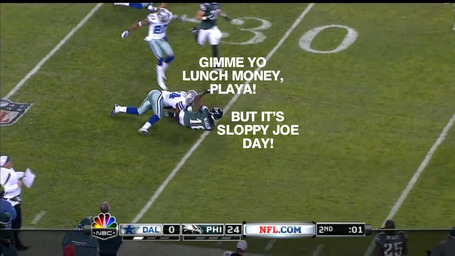 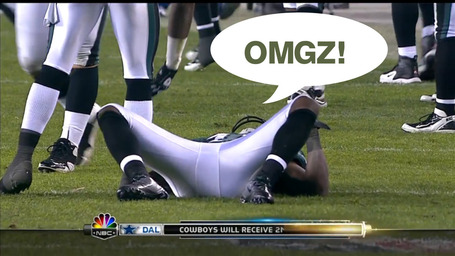 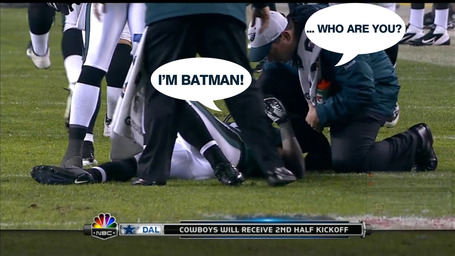 And yes, I did just get to 1500 words on a player with one special teams tackle and zero defensive snaps.