When it comes to the power running game of the Cowboys, it's anything but conventional. Earlier this season, we noted how at the goal line against the Patriots, they lined up in a heavy power package, and then ran Jason Witten behind the line and out into the flats for a pass. Seems that Jason Garrett just doesn't like a 'gut' run in short-yardage situations.

Against the Seahawks early in the first quarter of last Sunday's game, the Cowboys were faced with a third and one. They came out with two tight ends lined up to the right of the formation, in front of an I-set, with a lone receiver split left. This looked liked a power run to the right. The Seahawks defense is shifted over to compensate. 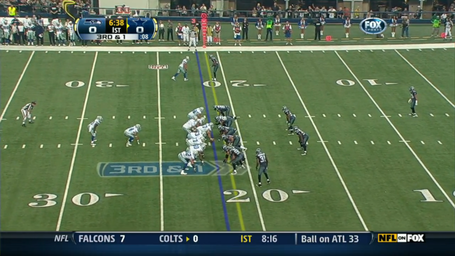 Below is another view of the power set that gives a clear view of the Seahawks line shifted to their left, leaving lots of open field to the Cowboys on the other side. Garrett got what he wanted because he had no plans of punching it up the gut to the Cowboys right. 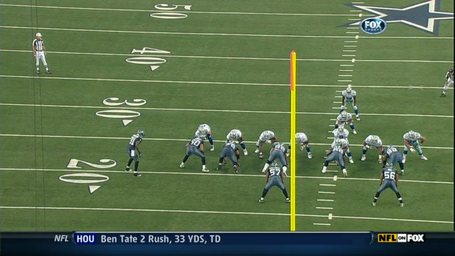 Once the play starts, Tony Romo pitches to DeMarco Murray nine yards deep in the backfield. That's a big risk, starting a third and one play that deep. A Seattle player from the backside reads the play and looks like he might have an angle on Murray. Doug Free blocks down freeing up Montrae Holland to pull to the outside. Fullback Tony Fiametta is left to deal with the free defensive end. 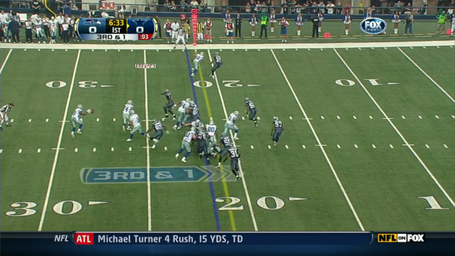 This is what DeMarco Murray sees, and he has to like it. By showing just a bit of patience and setting up the blocks, he knows he has an alley to run through. 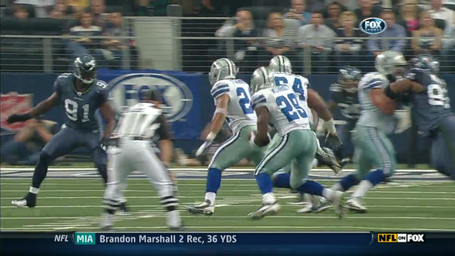 And that backside Seattle defender? Murray's speed has left his angle of pursuit in the dust (now pictured behind Doug Free in the middle). Fiametta does a great job of kicking out the end, Holland gets to the second-level and pushes the linebacker out of the play and Free has his guy locked up. It's the proverbial 'hole you could drive a truck through.' Because of the power formation to the left, the only guys left are a linebacker, who is partially cut by Kyle Kosier getting to the second-level, and.. 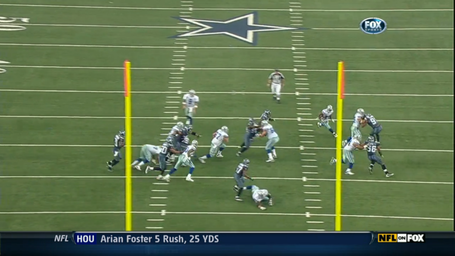 ... the safety. Because of that, Murray had to settle for a 14-yard gain instead of a touchdown. 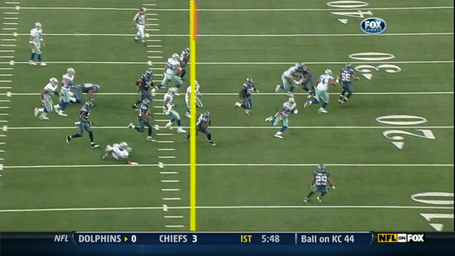 As much as it frustrates some of us watching, the Cowboys usually don't execute a power run when they line up in their power formations for key third downs or on the goal line. Later in this game, the Cowboys were at the goal line and passed it twice and ran once. The run play was a variant on this play, but used misdirection to get Murray out wide on another toss. The Seahawks weren't fooled and stuffed it. Sometimes you can trick 'em, sometimes you can't.