This is the second in a series of articles where I will talk about the basics of Football 101.

Last article we dealt with the alignments, numbering / lettering and play calls which included some of the terminology of play calling that are found in our "Route Tree."

In this article we will expand the concept of the basic routes that the receivers run and their terminology and numbering.

Below is the typical Receiver Route Tree for the "X" receiver and and the numbers for the playbook.

This tree is not identical for every Offensive Coordinator, but it is typical. The thing that is MOST common, is that the Odd number routes go to the outside, and the even numbered routes go to the inside. So, keep in mind that this means that for the "Z" receiver, the tree is kind of reversed.

The reason I am showing the tree for the "X" receiver is because the "X" is normally considered the #1 receiver ( the first option in many or most of the plays for receivers.) 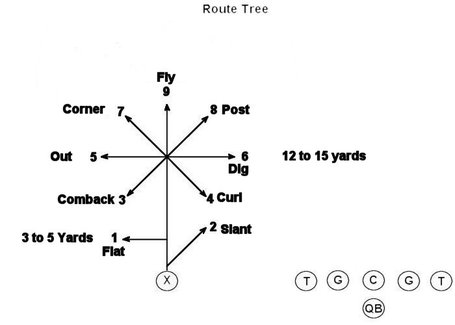 Now, before we get into some of the routes above, lets talk about what makes a great receiver.

Here are the 13 that I think merit consideration in order of MY PREFERENCE:

1. Catch The Ball - Great Hands
2. Runs great Routes - Is where he is supposed to be (Knows the Playbook inside & Out).
3. Makes great Adjustments to the flight of the ball.
4. Ability to break tackles - YAC (Yards After the Catch)
5. Gets Seperation - becomes an Open Target well (Cutting Ability and Setup the Defender Ability).
6. Can Win every Jump Ball - Catches the ball at it's Apex.
7. Football Speed (Great 40 and 60 yard times).
8. Quickness (Great 20 yard times).
9. Can Read Defenses when the route is a "flex", (AKA Option Read),  route based upon the position of the defense.
10. Has great Strength and Conditioning.
11. Has great Balance.
12. Blocks very well.
13. Can take a hit and plays without fear.

Next we will talk about some of the routes. Notice I marked the routes that are in the 3 - 5 yard range. These are good routes for the "3 Step Drop" plays. Next notice that I marked the 12 - 15 yard area. These are the staple of the 5 and 7 step drop plays.

The "Curl" is sometimes also known as the "button Hook"  When it is run in the 3-5 yard area, it is usually called a "Hitch", if the corner is staying deep it can be very effective since the receiver can just stop and turn and the Corner will still be off balance and trying to come back. This is a favorite route of the West Coast Offense.

To guess what kind of route a receiver is going to run, look at where he lines up relative to the "numbers" on the field. If the WR is lined up at or inside the numbers, more than likely he is giving himself room to run the "Out" route.

Another route that has a couple of different names is the "Dig" (6) route. If it is run at about 5-8 yards, then it is usually called a "Drag" route. If both outside receivers, the "X" and the "Z" run a "Dig" then it is a double crossing route and a nice "legal" pick can occur.

The "Corner" or (7) route is the top "Tampa Two" beater in the NFL today because of the pressure it puts on the corners.

The "Post" or (8) route is a great play for "Man" coverage. The WR runs on what appears to be a (9) route, but will suddenly break at a 45 degree angle toward the goal post on the other side of the field, hence the name "post" route. By having either the "X" or "Z" run this route, you are also opening up the underneath stuff for the Tigtht End.

When the receiver cuts at the 45 degree angle real soon, it is called a "skinny Post" route.

The fly route, is also called a seam route, a streak route or "go route", and in my opinion should be run at least 8 of the normal 12 series that an offense gets. Doesn't mean the QB will have to throw it all 8 times, but it is the key that made the "Greatest Show on Turf" run. It will keep the safties deep all game and will open up the running game better than anything else the offensive Coordinator can do.

Another route that isn't part of the "tree" because it is normally not run by the normal receivers, but by the running back, is called the "wheel" route. In this route the player will run towards the sideline and then just in time will turn upfield in a large half-circle and go on a "fly" route. When this route is run effectively by having the receiver turn and look for the ball during the half-circle, the DB will often bite and take a bad angle hoping to get a pick, but then will be in a "trail" position and a big play is usually the result.

And finally my second favorite route right behind the "dig", is the "stop and go." It will usually make a corner that "Cheats" like Samuels, look silly because he will try to "jump the route" and then it is usually "to the house."

Seems simple enough, so you might ask as was asked below, why is it so hard for some guys to not buzz right through their part of the playbook? Well, there are offshoots of this tree, and more important there are nuances. I will include one of the more sophisticated nuances of the Garrett playbook to make it more Cowboys related as OCC suggested, so here goes....

In the Garrett playbook, you have "option reads" that are done by the receivers.

For example: Lets say, the play called in the huddle is for the "X" to run a "2" route (slant), but the Corner is playing "Bump and Run" and has what is called "Inside Leverage", which means he is playing to the "X's" right and will make it almost impossible for the "X" to run his route properly, (He is supposed to do what is called "Cross the Corner's Face", or to be sure and go to the inside), but not only is the "X", which is usually M. Austin, supposed to change his route to something else, like the "9" route which is one of the better options, (not sure what the option is in Garretts playbook), but the QB also has to recognize what that option is and make the same adjustment.

"This adjustment by both the WR and the QB is what is meant of the WR and the QB being on the SAME PAGE. Sometimes the WR can give a secret signal to the QB or vice versa, but they both have to do it even if they dont get a chance to alert each other."  And if it is not made correctly everytime, then you will find that the QB does not "Trust" that receiver, (As was the case often with Roy and perhaps still with Ogletree), because it can and often will, lead to an INT on the QB, and it won't be his fault!  And guys will say..."That stupid Romo, why did he throw it right to that Linebacker, is he blind?"

Gee, if I keep posting my articles this often, I will run out of ideas. I hope not, but it is a distinct possibility especially if the "Blogging Police", AKA my wife, catches me on here so frequently. She will make sure I run out of ideas. LOL!

BTW, if you like this series, please give it a "recommend." That will keep it visible for a little longer than it would otherwise be.

How often should I do my Football 101 Series?