Good schemes, or great schemes, or the coaches planning for an opponent, can very well kiss my ahem if the players can't perform their roles with consistency.

Who has seen talk of Romo as a QB that can't win in the Playoffs? Despite the fact that his team already won one playoff game... I'm seeing a forest of hands... And some nodding heads...

Romo wasn't very helpful in some of the losses, sure. But was he THE only factor?

It's a TEAM sport, you win or lose as a TEAM, and unfortunately this TEAM has done a lot of things to lose games.

That's the purpose of this post, the performance and execution seems to be pointed up at this time of year and we can only hope that it's going to continue to be so, so what I'm going to do is look at several running back carries over the year and look at the assignments for every player as the play develops, to see failures and successes. 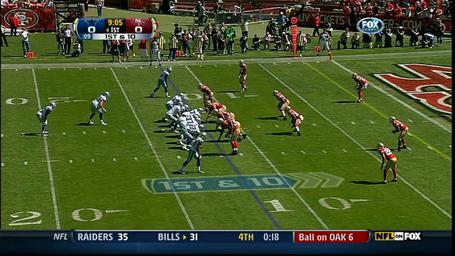 The scheme is one that has worked great for the Cowboys many times, it's the H-Back scheme as devised by Joe Gibbs, the teams line up and the play develops as follows:

Free, Costa, Kosier and Smith perform their blocks as close to perfection as possible. Witten makes a good double team, but he's also supposed to slip and take on Willis, but he loses his balance, Willis is too quick for him and ends up in a bad angle. Murray takes a step to the North-West, redirects and moves behind Phillips and Dockery. The play fails because Dockery and Phillips miss their assignments, Dockery to push Ahmad Brooks (55) away from the play (even with an advantage of close to 70 pounds) and Phillips fails to catch NaVorro Bowman (53).

The result of the play is Murray getting hit 2 yards before the LOS and a gain of 1-yard because Murray made a good cut before contact. 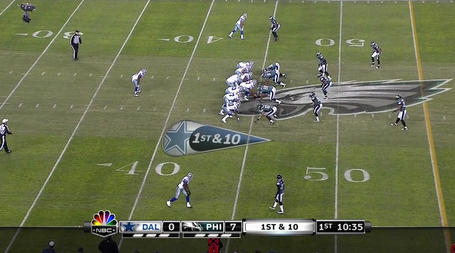 Small variation of the play, this time it comes from a Double Wing power scheme, the teams line up and the play develops as follows:

Want a scheme designed for this year's Eagles aggressive and wide D? This is one. Both TEs initially take on the Ends one-on-one. Free and Costa take the DTs. Holland pulls and takes the SLB out of the play. Kosier and Smith move behind the Line, Kosier has to open a lane between Witten and Free so he helps Witten in a double-team of the End, and Smith moves through the lane and takes the WLB. Perfect execution of the play leaves the RB with this opposition: a CB and the MLB in a bad angle.

Asomougha goes low and takes Murray's legs, the MLB just has to hit Murray to slow him down and the Safeties arrive to stop the play at a 4-yard gain. 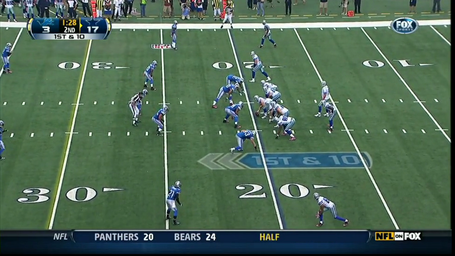 First draw play in this year, Fiammetta was inactive for the Lions game and I believe that there wasn't much confidence in the blocking in the first half of the season, one draw with poor blocking is a good recipe for a loss of yardage, the teams line up and the play develops as follows:

One of the good things of the 2 TE set is this kind of scenario, the Lions have to either play against it with their base D or Nickel D, changing a LB with another DB, making for a lighter D. In this case, a Safety plays the role of a LB and he's supposed to take Witten that stands split wide. The OLine and Romo make a perfect sell, it's a pass and the DLineman go all-in for the QB, the MLB starts to drop back, the left side LB moves forward to take Bennett or as a delayed rusher and the extra DB moves North-East to take Witten. Free takes advantage of the aggressive position of Vanden Bosch and allows him to take himself out of the play. Bennett engages with the left side LB. In this play I believe that Costa made a mistake, I don't think that Nagy was supposed to take on the DT by himself, Costa should have helped him in an initial double-team just to take the DLineman off-balance, split and take the MLB. Instead, Costa helps nobody and later goes on and decides to take the extra DB.

The result of the play is a good lane between Free and Nagy, the MLB stands 13 yards away from the LOS and makes for an easy 6-yard gain by Jones. 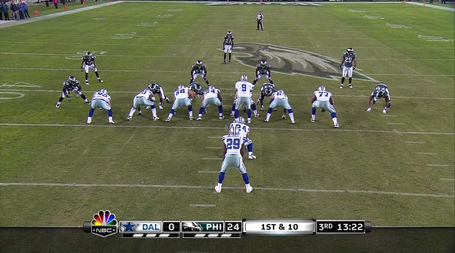 First things first, this call from Garrett caught me by surprise, a power play that hasn't worked at all during the whole year, the game looks out of hand and they aren't even in the red zone? I wasn't feeling lucky. The teams line up and the play develops as follows:

The play came very close to being a good play, but a couple of mistakes derailed it. First, Holland was in the wrong place for too much time, his late reaction makes me think that at first he was indeed supposed to help Free, but that he had to slip from him quickly and take the WLB, when he reacted his assignment was long gone. Second, Murray has to remember one of the fundamentals of his position, to follow his lead blocker, instead he ends up following Kosier who makes a good block but there's too much traffic. The FB is your best friend, following Fiammetta would have meant nothing but green grass in front of Murray.

The following couple of games tell me this, though: Murray has confidence in Fiammetta.

Now the thing is: Do you have confidence in the running game? My opinion: it's improving, but I don't think that it's there yet, there are still several inconsistencies.

Thanks to imageshack and postimage for their image servers, and picasion for their animation server.