A few times this season, I've spent time and effort chronicling the Dallas Cowboys aversion to 'gut' runs in short-yardage situations. Against the Patriots and against the Seahawks, when faced with one yard to gain for a first down, or at the goal line, the Cowboys have used trickery from their power-run formations in an attempt to pick up the needed yards - sometimes with success and sometimes without. This past week against the Bills, the Cowboys finally went conventional and DeMarco Murray found paydirt. I almost fancy that Jason Garrett was reading the posts here at BTB.

In the middle of the second quarter, with the Cowboys holding a 21-7 lead, the Dallas offense found itself with a first and goal at the Buffalo one-yard line. We've seen this situation before, so I was expecting some kind of play-action pass, or some kind of outside run.

Below is the alignment before the play, the Cowboys are lined up in a basic formation with tight end Jason Witten on the left-side of the line. 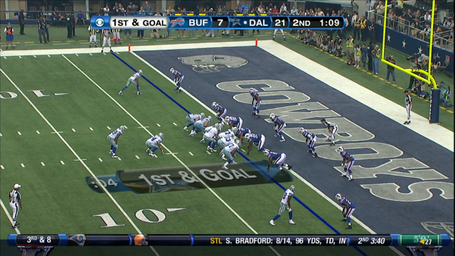 At the snap of the ball, Phil Costa and Kyle Kosier double one defensive tackle, while Montrae Holland blocks the other defensive tackle in the same direction. Obviously, the Cowboys are running to the left-side of their offensive line. Doug Free is man-up with the defensive end, and just outside of the frame Jason Witten is blocking the outside linebacker. Fullback Tony Fiametta has his sights on the free inside linebacker. 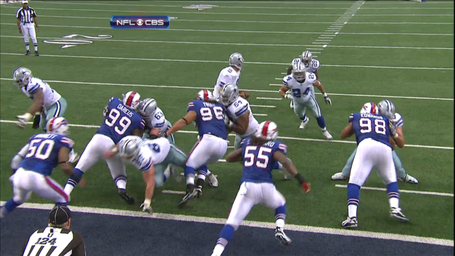 Now, I've been advocating for this type of run in these situations in part because there is a low-risk factor with the football. But even on this play, the Cowboys almost ran into disaster when the handoff from Tony Romo to DeMarco Murray was bobbled. Below you can see Murray doesn't have the ball firmly in his grasp, but luckily he manages to secure it before he hits the traffic. 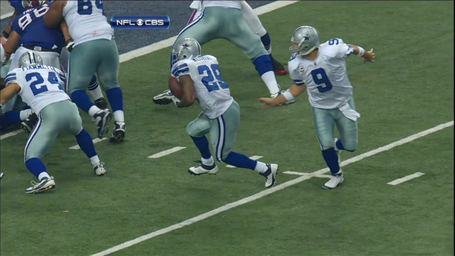 In a wide-angle view, you can see how the play is progressing. All of the linemen, plus Witten and Fiametta are squared-up on their blocks and are winning the battle. A hole is opening between Free and Witten on the left-side. 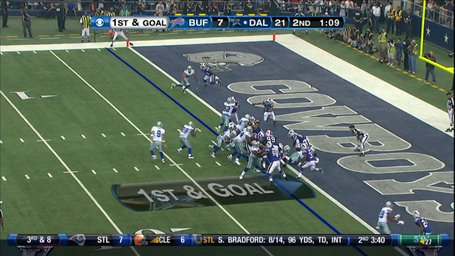 Another good view shows Fiametta with a form-perfect block on the inside linebacker, Free is driving his man into the endzone, and Costa has peeled-off his double-team block to just barely get to another linebacker to keep him from filling the hole. The hole is now opened between Free and Witten (Witten's leg is barely visible in the picture). 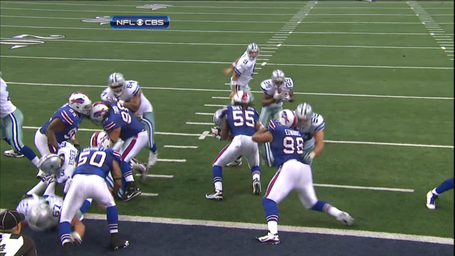 Now here's the rub. Despite great blocking, a safety is left free to fill the hole. My support for this type of play is built on the premise that a running back can beat a tackle for one-yard by sliding off the contact to one side and falling forward. It's almost impossible for a tackler, one-on-one, to stop a running back from getting a yard if the back uses his smarts and angles to one side or the other. 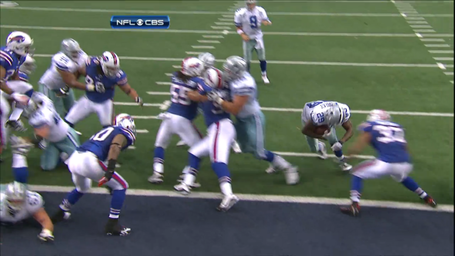 This is exactly what Murray does - he takes the contact and falls to his right, and the Cowboys have six points. 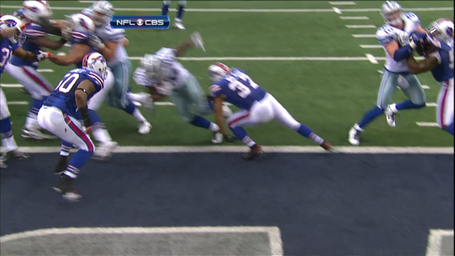 I was overjoyed to see the Cowboys actually trust their blocking, and trust their running back to get one-yard for a touchdown instead of messing around with passes or trickery. Thanks Jason Garrett.