The Story Behind The Missing Bradie James

Share All sharing options for: The Story Behind The Missing Bradie James

Among all the celebration of the Dallas Cowboys' victory over the Buffalo Bills, there was a question that arose. Several people noted that Bradie James only made it onto the field for one play. This seemed a curious thing. James has been supplanted by Sean Lee, but he is generally perceived to be a better player than Keith Brooking. Was there some other reason for him to not be on the field?

OCC tracked one down. In his Thursday post on Cowboys news, he found an article in the Dallas Morning News about how Bradie James is part of the base defense, and comes off the field for three and four receiver sets. The Bills chose to run those sets pretty much all the time, and so James, although a team captain, got to watch this game from the sidelines.

I got to thinking that there is more to the story than that, so I contacted someone I know who has some contact with the team. He doesn't like to be credited (for totally non-sinister reasons), so I'll just pass along his info. Although I am tempted to call him by a totally random nickname that has nothing to do with skullduggery and secrets, like, say, Deep Threat.

Sorry. Couldn't resist. Anyway, what he had to pass on was very interesting, particularly as a glimpse into the Rob Ryan defense. I have added my own analysis of how this all works.

What I got after the jump.

First off, the team recognizes that both James and Brooking have limitations in pass coverage. The Bills sets referred to as three and four receiver sets in the DMN article are functionally four and five receiver sets, with the running back splitting out and becoming a receiver himself. In these situations, Rob Ryan goes with his defensive backs.

Now, there has been a lot of criticism of the Dallas DBs, and in an article on NFL.com about the wild card race in the NFC, Elliot Harrison lists the safeties as one of the holes in the Dallas team (although he does consider Dallas the favorite to win the East now). But the evaluation I got from my friend is very different. Ryan likes to use players that can fill a hybrid role that is part cornerback, part safety, and part ILB. Barry Church, for instance, is a safety who can also play the role of an inside linebacker. And Danny McCray is a safety who can switch into a cornerback role effectively. And all of Dallas' safeties currently are able to switch between free and strong safety responsibilities.

This is part of the chaotic nature of Rob Ryan's defense. Over in a richly deserving FPOTW article Air Garrett Part II, CoachGary talks about the pre-snap and post snap reads made by the quarterback. Imagine what it does to those reads to see a gaggle of defensive backs, and not know who is playing the CB, FS, SS, and LB roles.

This all sounded really good. I went to the video of the game to find an example.  It didn't take long. I could not tell all the players on the first play, but on the Cowboys' second defensive play, right at the 11:40 mark, Dallas has Buffalo in a second and 20, thanks to DeMarcus Ware's sack on the previous play. There Buffalo is in a shotgun with three receivers right and two left.

What has Rob put out there? On the line, you have Anthony Spencer, Jay Ratliff, Jason Hatcher, and DWare. Sean Lee and his Killer Q Tip is just behind Hatcher. 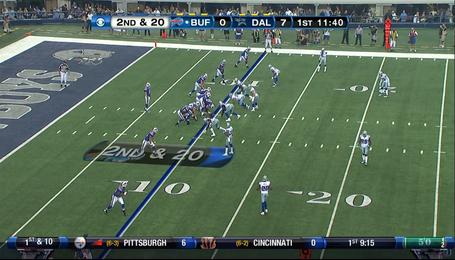 The other six defenders, going counterclockwise from right side of the formation, are Church (S), who is the one standing just behind the 1 there near the top of the screen, Terence Newman (CB), Gerald Sensabaugh (S), Abram Elam (S), Alan Ball (CB) and Orlando Scandrick (CB). Scandrick is going to move up just before the snap and blitz (that is the picture at the top of the article). Ryan Fitzpatrick completes a quick slant (all he has time for) to Donald Jones for six yards, but that still leaves 3rd and 14. And Frank Walker came in on that play and leveled Fitzpatrick just as he was releasing the ball. Buffalo punts, Dallas drives for a 14-0 lead, and they are off and running.

It makes you think. Perhaps what other people are seeing as a weak area on the defense is actually a strength. Rob is putting all five of his safeties on the field during the game and getting production out of all of them. While the defense is still a bit of a work in progress at this point, it does show some very interesting potential.

And, as my friend observed, there is a certain bit of the RKG idea here. He described the multi-role safeties as RKGs who will take on whatever task is needed to get the job done, and from my quick review of the game, I think this also applies to some of the cornerback play. I would add Bradie James to the RKG discussion, for accepting that his role is to have someone else out there to match up with what the team is facing.

This team may be peaking at the right time to make a playoff run. I just found it interesting to take a deeper look at one facet of what they are doing to accomplish that.