This is the fourth article in a series of articles where I will talk about the basics of Football 101.

In this article we will deal with the Secondary, AKA Defensive Backs (the Corners and Safeties), and some of their responsibilities and techniques.

Before getting into the specifics, I want to mention an interesting point about playing defense that is not mentioned very often. When the defense is on the field, first thing that should be apparent is that the offense has the advantage. There are several reasons, and I would like to mention a few:

1. If you have ever played "Keep Away" and you were the guy in the middle, you had this distinct feeling that somehow it just wasn't fair. It was two against one, and the guys that were throwing the ball and catching the ball, (and trying to keep it away from you), had the advantage in that you could normally only look at one of them at a time because you were sandwiched between them. Advantage, the guys with the ball.

2. The guy that is going to catch the ball, knows where he is going and you have to react to his moves. That alone puts you at a very big disadvantage in that you are always playing catch up because you are reacting to his moves, and if you try to "guess" where he is going, it can be a worse disaster.

3. If he is faster than you, (WR's are often faster than corners, and definitely faster than safeties), then if he ever got by you, you were once again in big trouble.

So, you can see that just using plain logic, the Offense has the advantage. They know what is coming and where the ball or ball carrier is going and the defense has to react after the fact.

The next thing one should observe or know, is that there is no such thing as a perfect Defense, if for no other reason than the offense has the advantage, and that the best defense is when it is sitting on the sidelines.

So, with that background, we will do a little bit of definitions and terminology used in the secondary and then we will look at techniques.

These designations are not completely standard and Here are some other good explanations of the different coverages. On some teams the Defensive Calls for the Secondary might be as simple as signaling in one word....something like "Quarters", with the actual sets determined by how the offense lines up and the secondary signal caller (Abram Elam) makes changes as needed within that general coverage. 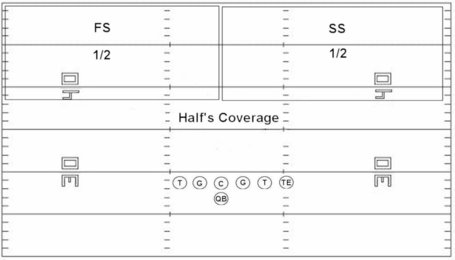 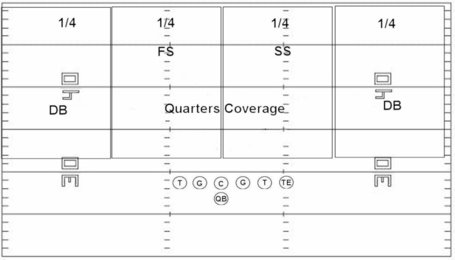 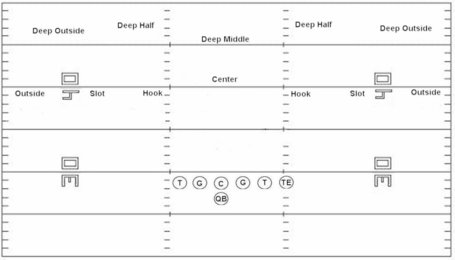 There are two basic DB Coverage Philosophies when you are in "Man to Man Coverage". (One is what I call the Dave Campo Philosophy, and the other I call the Darrell Green Philosophy. Maybe you guys can guess which is which.)

Positioning for proper scheme - If you play "straight up", (line up directly in front of the receiver), the technique will be different than if you choose to use "Inside Leverage" or "Outside Leverage."

Often you may want to "take away" the slant. When you line up to take it away, you will position yourself to the inside shoulder of the Receiver. Next you will see the good DB's drop their right foot back a few feet so that the left foot is forward. When the receiver gets off the line and tries to go inside, you are already in his way and you will need to "punch" his chest with your Left hand to keep him from over powering you. This is the essence of using what is called "Inside Leverage."

For me the best coverage is to do the opposite, (unless you want to take away the slant), and position yourself with "Outside Leverage" and that way you can see the QB, the Receiver and the Ball at all times and when the ball is in the air, you can get a good break on it. The disadvantage of this technique is that you are letting him have a slight advantage on a slant. If this is done on the Weak side, and your DC will let you work with the "Jack" (D. Ware), you can have him drop into the slant area and sometimes he will be able to pick the pass off.

For Straight up, you want both feet even and your weight on your toes.

Thirty Yard Rule - This is a "CoachGary" rule and I am sure somebody must be teaching it, but I have yet to read about it. Once the receiver reaches 30 yards from the line of scrimmage, the defender should turn and look for the ball because the amount of elapsed time is such that the odds of the ball not already being in the air are almost nil. This goes along with the idea of not using the "pocket" technique because you want more interceptions, and from now on watch and perhaps track how many times the "pocket" technique doesn't work. How many times have you seen a defender 30 or more yards down field and the ball goes right by his ear hole and the QB is depending on the defender NOT turning around?

Redzone Rule - Another "CoachGary" rule that says once the receiver is 5 yards deep into the endzone, the defender should turn and look for the ball because the receiver is running out of room and the odds are the ball must already be in the air. Again, the opposite of using the "pocket" technique.

Well, there is a lot more to cover but there are plenty of links out there with the help of google you guys will hopefully have enough knowledge to at least know what you want more of. That is one of my purposes of doing these articles is to give you enough so that you can know what to ask.

Keep in mind that some DC's will have their own zones and terminology but this will be a good start. For example, some that teach the zones will start with saying there are 5 zones underneath, and either 2 or 4 zones for the Secondary, while others will talk about the 7 underneath zones that I have in my "Zones" Figure.

And also keep in mind that I have checked some of this, but not all of it since much of it is from memory, so if I missed something or got something wrong, please help me correct it.

I am thinking my next article in this series will be on Saturday and then every Saturday after that until I can't think of any other topics to do. I may post some other articles about other stuff that won't be part of this series during the week.