Cowboys 27, Redskins 24: Things We Knew And Things We Learned

Share All sharing options for: Cowboys 27, Redskins 24: Things We Knew And Things We Learned

Going in to the game, many fans and pundits had expected a blowout game. But it turned out to be another tough divisional game in which the Cowboys were rescued by Dan Bailey's OT field goal.

The Cowboys provided the Redskins with two short fields, one on a 23-yard punt by Matt McBriar, one on a long punt return by Brandon Banks, and both ensuing Redskins drives resulted in touchdowns.

It wasn't always pretty, but it also wasn't as bad as many made it out to be initially. And in the end, the Cowboys got it done, for their second 27-24 OT win of the season.

The Cowboys may not be a great team yet, but they sit atop the division, they have a little momentum going after winning three in a row and they should find a way to win against the Dolphins at home on Thanksgiving.

The running game is here to stay. The Cowboys stuck with their running backs throughout the game. Murray and Jones rushed for 91 combined yards on 30 carries. That's not a stellar output, but the Redskins played some pretty good run defense. Yet Garrett kept calling for runs in situations where the Cowboys might previously have favored the pass a little more.

The backups continue to make the most of their opportunities. It sure would be nice to have Miles Austin back in the lineup, but that's probably not going to happen before the Giants game. In the meantime though, the role players are "making the most of their opportunities" as Garrett would say. Ogletree and Holley each had a reception and the oft-maligned Martellus Bennett caught all three balls thrown his way.

"I really needed this game," said Bennett, who had only six catches for 49 yards in the first nine games. "I know I didn't have 150 yards or anything like that, but I really needed a game where I could get out there and get involved in the passing game. I was just getting in the routine of blocking, blocking, blocking. It kind of weighs down on you when you're a tight end.

The Laurent Robinson story suffered a small setback though. Robinson was targeted 11 times but only had four receptions. However, he did a nice job of keeping the play alive on the TD pass, but overall, the Romo-to-Robinson connection was not as crisp as we've seen it before, and it wasn't just the wind affecting the long balls. Here's what Robinson tweeted after the game:

"Not pretty but it went down as a W! I have to play better next week. See you guys on Thanksgiving! #cowboysnation".

Everybody has to play better on Thursday against the suddenly surging Dolphins.

Bailey continues his hot streak: Bailey has now extended his consecutive field goal streak to 23. I went to fix a drink on his FG attempt in the second quarter. When I came back, the Cowboys were up 10-0. I was not surprised.

Field Position determines games. Life gets a lot easier when a team finds itself in ‘short field' positions (anything starting from about a teams' own 40 yard line is a 'short field'). Often, these short fields are the result of a takeaway, a long punt or kickoff return, a missed field goal or really bad punting position for the other team. Two things usually happen with a short field: the threat of a score is significantly higher, and the offense often finds itself emotionally charged as a result of the play that set up the short field.

The Cowboys scored 20 of their 27 points off such short fields, the Redskins scored 14 of their 24 points that way.

Special Teams remains an area of concern for the Cowboys. Dan Bailey's emergence as a clutch kicker and Mat McBriar's usually stellar punting is masking some of the deficits in the Cowboys ST play.

10 games into the season and the Cowboys still have not found a return guy. AOA is clearly not the answer as a returner. Additionally, the Cowboys got gashed a couple of times on returns, and only desperation blocks by Bruce Carter and Mat McBriar kept the Cowboys from giving up two return TDs. Prior to the game, Football Outsiders had ranked the Cowboys' special teams a season-high 19th in the league. That will certainly change after this game.

Wind can be a big factor in a game. Both QBs were off on deep passes all day. The Redskins missed on two long field goals (49 & 52) while Bailey's 39-yarder barely made it. And perhaps it was also the wind, more than any success rate and probability stats or strategic game plan, that made Garrett go for it on 4th-and-1 on the Washington 40.

Fortunately, the Cowboys only have two more outdoor games out of their remaining six: one in Tampa Bay, where the weather should not be an issue, and the regular season finale against the Giants at the Meadowlands, where inclement weather is almost certain.

Can one man really make such a difference in a game? In the case of fullback Tony Fiammetta, the answer is: Probably. The effect Fiammetta has had on the run game so far has been well documented, and his absence was lamented by many a fan in yesterday's game. And while it's true that better lead blocking might have helped the Cowboys, it's equally true that the Redskins' inside linebackers Fletcher (16 tackles) and Riley (10 tackles) both had one heck of a game.

Just how good is the Cowboys' run defense? The Cowboys' front seven basically shut down the Washington running game, only allowing 60 yards on 24 rushes for 2.5 yards a pop. Even more impressive are the nine tackles for loss the Cowboys defenders recorded.

This is the sixth time they've held opposing offenses below 100 yards rushing, so they must be doing something right. But the 256 yards given up to the Eagles still make me feel vaguely uncomfortable.

Somebody please explain the Cowboys' pass rush to me. Yeah, yeah, yeah, so the Cowboys recorded three sacks. But for most of the day, the Redskins' pocket held, and Grossman had enough time to step up into his throws - so much so that the announcers even remarked on it.

Consider that the Redskins had nine pass plays for more than 15 yards, compared to the Cowboys' five, and you get an idea of how much time Grossmann had, or conversely, how little pressure the Cowboys were able to bring.

And once Grossman started getting into a rhythm, the Cowboys decided to rush only three guys. How was that supposed to work?

Take the 16-yard TD pass to Gaffney with 20 seconds left in the second quarter that put the Redskins ahead 14-10 (the first time the Redskins held the lead in an NFL game in 329 minutes): 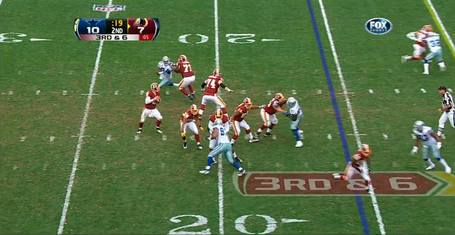 Here's the verbatim of what the announcers said on the replay:

Third TD reception of the season for Gaffney. So the Redskins, who scored only one touchdown in their last three games combined, have reached the endzone on back-to-back drives.

Good protection in the pocket, the ability for Rex Grossman to step up, have a clear line of sight to Jabar Gaffney. It's a double move and it's thrown with good timing. Right as Jabar Gaffney breaks to the inside from Gerald Sensabaugh