Share All sharing options for: The Dallas Cowboys' Anthony Spencer: Refuting The Hate

Seeing is believing. That is how the old saying goes.

Funny thing, though. I have worked around law enforcement for a few years, and in that community there is a different take there. Eyewitness testimony is the most unreliable evidence you can get. If you have two witnesses, you invariably get two wildly different versions of what happened. I have seen plenty of examples of this, and it is the only reason I can figure for the ongoing disputes about Anthony Spencer. He had one of the best days of his career on Thanksgiving, and yet the comment threads on the game kept breaking out in vigorous debates on whether his contributions even make him worth keeping, like in this one here about whether a TFL is as good as a sack, or this one that gets into his value overall. Obviously, not everyone is down on Anthony, but there are some who just don't seem to like the guy at all as a Cowboy.

Disclaimer: I have long thought that Anthony Spencer was a good, unselfish player who has specific roles to play in the defense, and the criticism of him has often puzzled me. At worst, he may not be quite as good as a first round draft pick ought to be, but when I look at him either from a statistical viewpoint or using the basic eyeball test, he is playing a very important part in the defense. This was especially clear against the Miami Dolphins, and I thought his performance should have quieted some of the debate. Instead, it seemed to have fanned it into a hotter flame. And it makes me wonder:

Are you guys watching the same player I am?

What I see after the jump. Pictures included!

Let's start with a little statistical info. I was really stunned to see some people making comments about how Spencer needed to be gone right after a game when he was the leading tackler, with eight total tackles, six solo, three for a loss, and one pass defended. Maybe it was the fact that he did not record any sacks or quarterback hits that made so many commenters dismiss his contributions.

This next bit may upset a few, but I figure I might ruffle a feather or two anyway. This is all strictly one guy's opinion, of course, but I feel pretty strongly about it. The intense focus on sacks is just a lack of football sophistication. It is a failure to understand the entire game and judges things in the most simplistic way, making the judgement of the player on the defensive equivalent of a long bomb. Sacks are flashy. They get a lot of attention because they are direct attacks on the true glory position, the quarterback, and therefore they literally are the center of attention when they happen. This is more important than you may think, because something like 99% of all football fans observe the game on their television, and they naturally are locked in on what the camera is locked in on, which is the quarterback when he drops back to pass. The sack is then front and center when it happens. It looks special, and it is a drive killer - but it is not the only thing going on. How many sacks come from the secondary taking away the receivers? And what happens when the sack just barely misses? Say, like when a Tony Romo almost goes down (he got hit seven times, but only sacked once against the Dolphins) but gets off a pass to the best tight end in the game today who converts a key first down, or to a very evasive rookie running back who goes for seventeen or so yards. On back to back plays, no less. Very close to sacks - but I don't see any horseshoes or hand grenades around.

The sack is a big play, but I think in this case, it is overrated as to how important it is in the big picture. Or to be more precise, people see how big the sack is, but don't see how big other plays are. And a defense has to be able to do more than one thing. What good is a five sack performance if the team gives up five touchdowns along the way?

While part of Spencer's job is to get pressure on the quarterback, it is hardly all of his job. He is on the same team as DeMarcus Ware, who will be the primary sack threat for the foreseeable future. Although Rob Ryan does move DWare around, most of the time he is going to be lined up on the blind side, and Spencer is coming from the quarterback's front, which makes him easier to avoid. And sometimes, he just doesn't get as much credit, as in this shot where he is definitely pressuring the quarterback, but because the ball just gets out, he doesn't get credit for anything, although you know Matt Moore had to be aware of how close he was.  (I apologize for the blurriness of the pictures. I live in pretty severe rurality, and have to rely on a somewhat shaky wireless connection.) 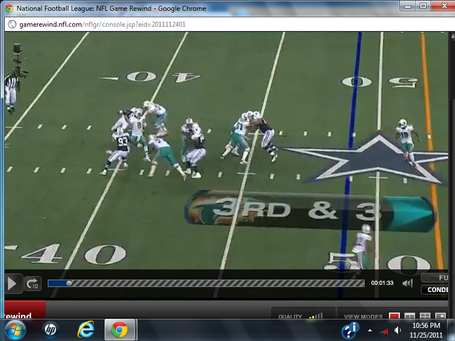 And don't forget the play in the fourth quarter where he knocked the ball out of Moore's hand. Another one of the great defensive plays in the red zone, and one of the plays that forced Miami to settle for a field goal, which left Dallas with only a two point deficit going down to the wire. 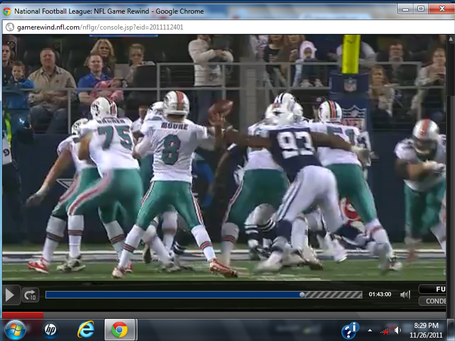 But Anthony also has other responsibilities. And against the Dolphins, he had some plays that certainly showcased how well he can handle those.

In the second quarter, Miami had a 1st and fifteen after a penalty. The Dolphins ran a play with fullback Charles Clay sneaking out of the backfield to the right flat. On this play, Spencer had pass coverage responsibility and picked up Clay. 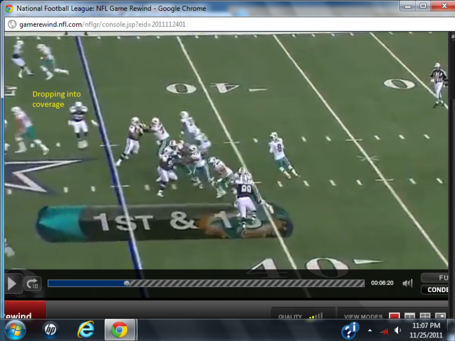 Here he is dropping back and reading the play. 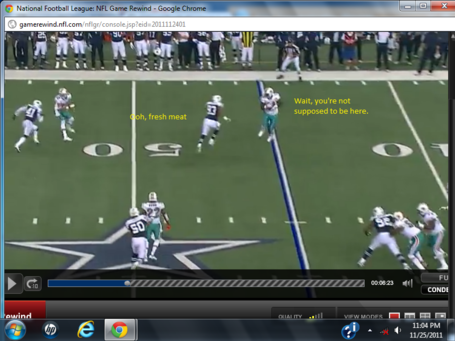 Here he is, closing in. Notice that Clay has just pulled the ball in and does not have time to put much of a move on the onrushing Spencer. 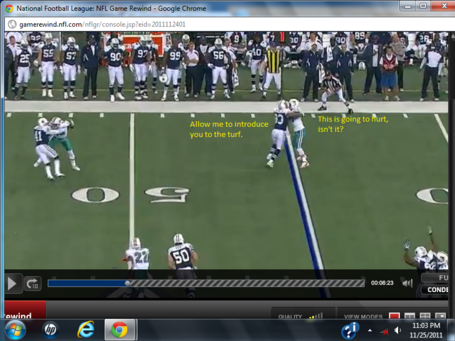 Payoff. Anthony gets the tackle for a yard loss on the play.

A little later in the same quarter, he had an even better play. In this one, the Dolphins are again trying to get the ball to a back, but this time the target is the much more dangerous Reggie Bush. And this time, Anthony appears to read the play and disengage from his blocker, coming across the formation to make the play. 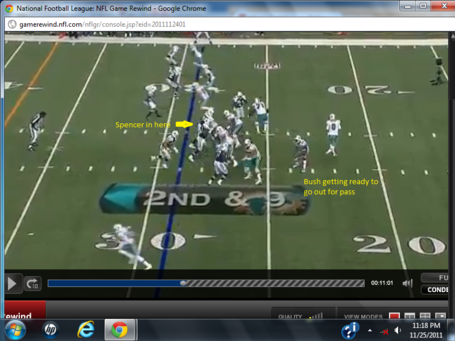 Here he is engaged in the middle of the line. You can see Bush starting to slide out to take the pass and operate in space where he is so effective. 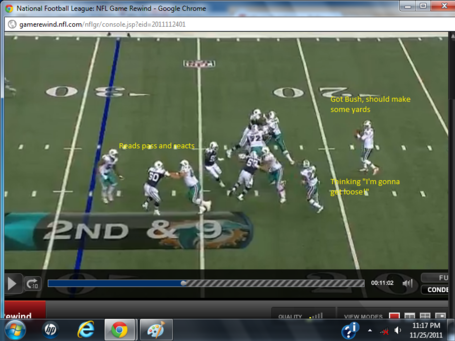 Anthony has diagnosed the play. He is the only man who is going to be able to stop this thing with Sean Lee tied up just to his right. 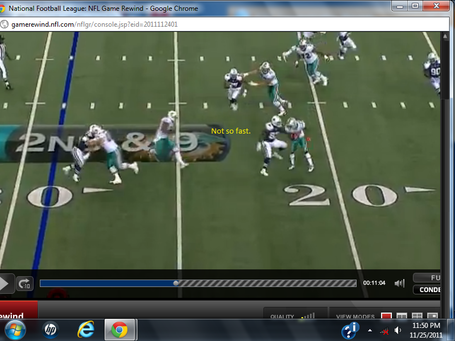 Here Anthony has closed in, again before the back can avoid him. 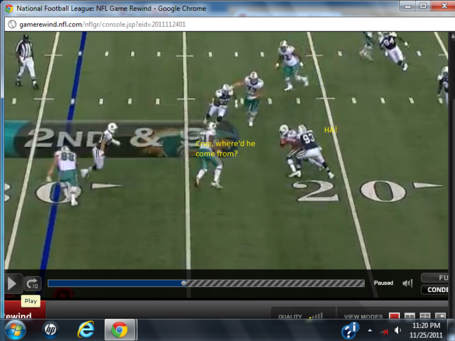 And he wraps Reggie up for a five yard loss. Oh, and on the next play, the ball will go sailing over Moore's head and Dallas will get its first touchdown.

More important, consider that these are parts of Anthony's responsibility. He can't just charge blindly after the passer. He has to keep his head up and read what is happening to react to a running play or a pass near or behind the line of scrimmage. On these two plays, he did his job exceptionally well.

If you haven't quite picked up on my point, it is this: Anthony Spencer contributes a lot more to this team than just rushing the passer. Looking at his sack total and deciding he is not worth having on the team and should be replaced is just not an intelligent way to evaluate him. Sure, he has had games that did not go as well as the Thanksgiving game did, but he is often doing a lot of things that don't show up so clearly. The two pass plays I described showed a remarkable degree of athleticism and football smarts, particularly the one where he tracked down Reggie Bush. And those plays were clearly just as good as a sack, and likely stopped a couple of nice runs after the catch.

So stop before you declare Anthony a bust or just an average player. Take a deeper look. I think he is a very valuable part of this team. Oh, and so does Rob Ryan. Looks like he got that one right.