It's been a long time, I shouldn't have left you...

I haven't written "football" football in a while, and I miss it! O.C.C., Tom and Rabble have been doing a great job ( Tom, stay away from my pic caption schtick, thank you very much :D ) keeping up to date on the latest comings and goings. To get back in the swing of things, I offer my take on the latest in Cowboys News and Notes for your consumption.

Should the Dolphins have let Dallas score late in the game on Thursday, in an effort to get the ball back? FO debates it in this weeks Audibles column.

Rivers McCown: Anyone else feel like Miami should have let Dallas score at the end of the game?

Mike Tanier: I think, when there are about two minutes left and the opponent is in obvious field goal range, you have to pull out some high-risk defensive calls. You look for the sack, the turnover, or a couple of throwaway passes, and you prepare for having to answer a touchdown.

Ben Muth: I agree with Mike. Run some crazy blitzes, and burn zones/men behind them. Hope for a sack or pick, and live with a touchdown.

Aaron Schatz: My brother-in-law also suggested that Miami let Dallas score. I'll have to run some numbers on that sometime, perhaps when I'm not away on vacation. One thing I know is this: There's no reason to let Dallas score when they've got first-and-10 at the 29 with 2:00 left. But at that point, you have to hold them to a 40-something-yard field goal: one that can possibly be missed. You know they are going to run it up the middle, you can't let DeMarco Murray go 21 yards on four plays. Murray had more yards per carry in those four plays, when Miami knew the run was coming, than he did the rest of the game.

Not to look past the Cardinals, because the coaches and players better not be, but there is some early news on the next 'big' test for Dallas. NBC has remained committed to showing the Cowboys-Giants tilt in two weeks, as the NFL's primetime Sunday feature. We've reached the point of the schedule where the network is able to flex in and out of tastier matchups in order to guarantee the most ratings. They looked at the schedule, and the battle for first place in the NFC East still pique's their interest more than other games. Anyone here surprised?

Here's the ebb and flow of Thanksgiving's game. Click the link to follow the timeline with play-by-play. 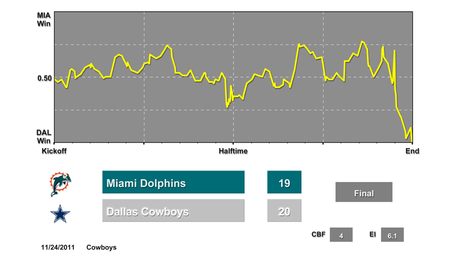 Mike Jenkins must have seen enough. Expecting to be back for the Dolphins game, Jenks added another 10 days of rest and hamstring rehab, but had to watch Alan Ball and the secondary get embarassed by Brandon Marshall and Brian Hartline (who?) on Thanksgiving. Jenks is looking at a full-participation Wednesday.

Jenkins said he plans on running full-speed during Wednesday's practice and despite running back-and-forth still hasn't done any cutting, which is important for any cornerback.

"It's about that, cutting and coming out of the breaks," Jenkins said. "I can go straight-forward."

Laurent Robinson Happy To Be "Wearing The Star" | NBC DFW

Robinson has 38 catches for 554 yards and seven touchdowns on the year, each of the seven coming over the past five games--

"I would love to be wearing the star the rest of my career," Robinson said, per ESPN Dallas. "I love everything about Dallas, my teammates. The stadium is out of control. That’s why you see me smiling every time I catch the ball. I just feel like this changed my whole career around. I’m just loving it here. I would love to stay a Cowboy, but we’ll see. I’m just going to try to keep getting better every week and see what happens later."

The forgotten man in the Cowboys four game winning streak has been the man Robinson is filling in for, WR Miles Austin. His hamstring issue still isn't right and the team still isn't sure of his return date. The Cowboys have reeled off four wins in a row without their greatest offensive threat. Make no mistake about it, that is Miles Austin.

It's funny how perceptions change. During the Thanksgiving game, I got into a twitter spat with a sports/entertainment "writer" who claimed that Miles Austin was a flash in the pan that has only been "so-so" since after his first 10 games. Obviously, the guy doesn't follow the Cowboys very closely. Austin was boss for 12 games in '09 and every game of the miserable 2010 before the Romo injury. Of course, I bombarded him with stats proving that when healthy (which he hasn't been since Week 2) and being thrown to by a legitimate quarterback, Austin is one of the league's elite. He countered those were excuses, that Larry Fitzgerald hasn't had a legit QB in years and he still performs.

Of course, when I informed him that since 2009 Austin has more touchdowns and a whole 2.0 more yards per catch than Fitz, I never heard from him again. Hopefully with Jenkins return, we won't have to hear much of Fitzgerald on Sunday.

It's not practice, but this is a glorious sign. The Cowboys new fullback stud, Tony Fiammetta has been out for a while with an undisclosed injury. Many feared the worst as the team hadn't been able to pinpoint the reason he couldn't attempt physical exertion without naseau and other symptoms. Today, he retuned to working out, the first step to returning to the field. Fingers crossed that the big guy is recovered from the mystery and able to rejoin his teammates sometime soon.

Dallas is averaging 3.2 yards per carry in his absence.

As many of us have opined, it looks like our punter has still been struggling with his 'drop foot' condition over the last couple of games. With a career average of 45.5 yards per kick, McBriar has been one of the league's top punters since he joined the NFL. Over the past two games however, his boot average has "dropped" to a lowly 30.4 per kick. Not only have his kicks suffered, but the injury has thrust Tony Romo back into the position of kickholder for field goals and extra points. Apparently, the Aussie just had to pour some turkey gravy on it, because he appears to be back at full strength now.

He’s been shut out in the first half of each of the past two games, and that’s not something he’s used to.

"That last two weeks, it’s been tough to get things going," Witten said. "They were familiar with us, and they did a good job, and there really wasn’t a whole lot of options."

"I didn’t have a catch in the first half. It was something you’re not used to having. A couple of picks that were different looks for him. You keep your poise. That’s what winners do."

Cowboys Cheerleader Melissa Kellerman Is Back On Twitter | Yardbarker

A big deal was made after the Thanksgiving Day game when Jason Witten was rode 10 yards out of bounds by a Miami defender (non-call of course) and into a Cowboys cheerleader. People perked up when the young lady landed in a compromising position that probably made Mrs. Witten turn a shade of red like Witten and Melissa Kellerman. Reports were that Kellerman was forced from Twitter by the parent organization in a move to control the message. Kellerman had made light of the situation by playfully calling out Jason Witten for his lack of toughness, and her Twitter acct. was closed. The @BloggingTheBoys account was greeted with a request to help get her account reinstated.

Well, Kellerman's twitter account is back on, and the club has refuted the reports that they forced her off. Kellerman stated "Cowboys did not "force" me to deactivate. I chose to spend the Thanksgiving wknd with my family….& not my twitter account."

I don't normally link to this site, because they rarely offer anything but generic opinions with no real coverage, but they are good for pictures. Of course, this story is accompanied by links to several snapshots of Melissa. All's well that ends well... just ask Witten's facemask.

This link is a little late (original article appeared Nov 17) but I love to look at the impact DeMarco Murray made in his short time behind the QB. Best success rate (61%) and YPC (6.7) of any starting back. Smart Football is a great site that covers both NFL and collegiate ball. The numbers have come down without Tony Fiammetta, but the Cowboys definitely appear to have found their back of the future. Felix Jones didn't register a single carry on Thursday.

It's about time. The article makes a great point about why it's under consideration. How many teams are writing off their season in Week 6, one, maybe two? No one is interested in trading for the future at that point. Imagine if teams could still complete trades up to this week? There would be crazy movement. You think the Eagles wouldn't be unloading DeSean Jackson for another team's stretch run? You think Houston wouldn't be offering a #2 or #3 for Jon Kitna if he was healthy? I love the idea. Make it happen Goodell.

"Obviously, free agency was modified this year because of our offseason," said Goodell. "We've talked about how do we create that same kind of enthusiasm around free agency. That was great. It created tremendous interest in the game. It, obviously, was terrific for fans to re-engage with the game that way. And the same could be said for trading. Fans love to see the trades.''