Share All sharing options for: Power And Speed Key To DeMarcus Ware's Game

The Philly game was a total bust except for a few guys on the Cowboys. One of those guys is All-Everything player DeMarcus Ware. Sure, there were times that he ran himself out of a play, but he ended up with four sacks on the elusive Michael Vick, which is a very good days work. One play in particular showcased two of Ware's primary abilities, a rare combination of power and speed.

The game was already out of hand, but Ware made fantastic play late in the third quarter. The Eagles lined up, and curiously for one of the few times all night, put right tackle Todd Herremans on an island with Ware. Unless the running back comes over to help out, Ware is perfectly positioned for a one-on-one matchup 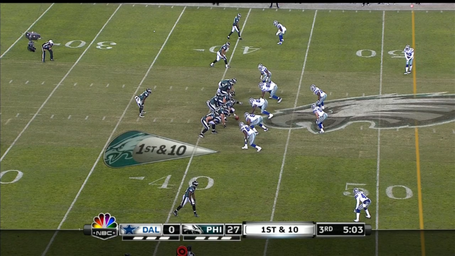 Below is a good view of the outside position Ware has on Herremans, with Kenyon Coleman a little outside of the guard, ensuring no help from there. 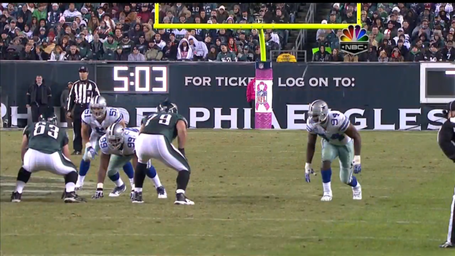 At the snap, Ware starts his move a little towards Herremans but still staying on the outside of his right foot. Herremans has to respect Ware's power-rush, and kicks out but sets up a solid base to absorb a Ware bull-rush or an inside spin move. He's keenly aware of his isolation on the play and doesn't want Ware to run over him on the way to the quarterback. He figures that since the play is a designed quick-pass, there's no way Ware can get outside of him and get to the speedy Mike Vick in time to affect the outcome. But Ware bounces his move to the outside and all Herremans can do is get a week punch to the shoulder. 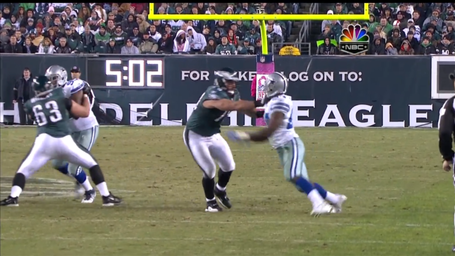 From an overhead view, you can see Ware getting around Herremans while Vick sets up to release the ball from a three-step drop. Initially, Vick looks to his right for the quick-release but Terence Newman has jumped the route. The slot receiver on the left side is open, but isn't looking for the ball yet, and Vick isn't looking left yet. 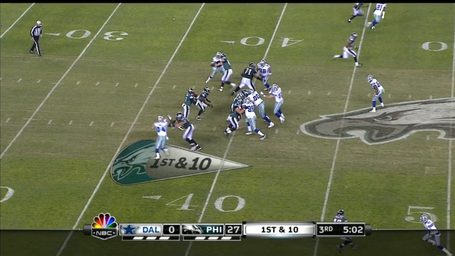 Once Vick sees he can't go to his primary read, he pulls the ball down to scramble away from Ware's side. The threat of Ware's power-rush allowed him to get by Herremans to the outside, but it's his amazing speed that allows him to close the gap on Vick, who really never sensed him coming. 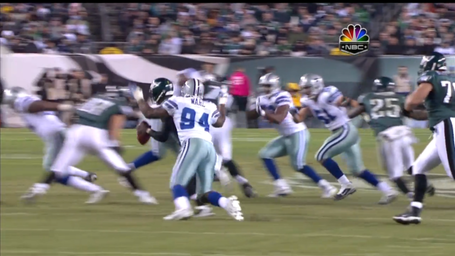 Ware completed the play with a strip-sack on Vick, but the badly beaten Herremans is trailing the play and manages to fall on the fumble. Even if Dallas had gotten the ball, it wouldn't have changed the final outcome. But what the play perfectly illustrates is the problems with blocking DeMarcus Ware. Trying to contain him with a one-on-one blocking scheme is a very risky proposition. For a lineman, choosing between stopping his power moves, or worrying about the speed rush, is a no-win quandary. Ware also has an array of spin moves and up-and-under moves and is fantastic with his hands. Finally, his closing speed is remarkable. Add that to a work ethic and will that is as good as they get, and you get a player for the ages.

Just a reminder to admire and enjoy the work being done for the Dallas Cowboys by one of the great pass rushers, and overall players, to play the game.