Video Review Of The Dallas Cowboys' Next Opponent: Arizona Cardinals

Share All sharing options for: Video Review Of The Dallas Cowboys' Next Opponent: Arizona Cardinals

The Cardinals have had a rough season. They come into the game at 4-7 and have no realistic hope of the playoffs. However, they are still playing hard, as was evident when I watched the video of their last game against the St. Louis Rams. It was a record setting day for the Cards, as running back Beanie Wells set an all-time team single-game rushing record (something that has happened against the Rams with some frequency this year, as I recall) and rookie CB Patrick Peterson tied the NFL record for punt returns for a touchdown in a season with his fourth, all 80 yards or longer. And Arizona came away with a hard fought win, albeit against a team that is arguably in worse shape.

One thing that is likely to be very different from the last game is the quarterback position. John Skelton played against the Rams, and he struggled throughout the game. The injured Kevin Kolb is expected to be back to face the Cowboys - but even the fans at Revenge Of The Birds argue about whether that is a good thing or not.

But there are a lot of other parts of a football team to consider.

What I gleaned from staring at the little flickering images after the jump.

Let's start up front with the offensive line. They had some good moments and some bad moments. Most of the good moments came in the rushing game, as they opened the holes for Beanie Wells to go for 228 yards. Most of the bad came in pass protection as Skelton got sacked three times and hit seven, plus had one interception that was a result of a defender hitting his arm as he released the ball. And there were six other tackles for loss as well, plus several plays where Skelton was scrambling to avoid the pass rush and managed to gain some positive yards.

Lets look at the most positive play of the game, Beanie Wells' 71-yard run late in the first quarter. It turned out to be a bit of the perfect play call for the situation. 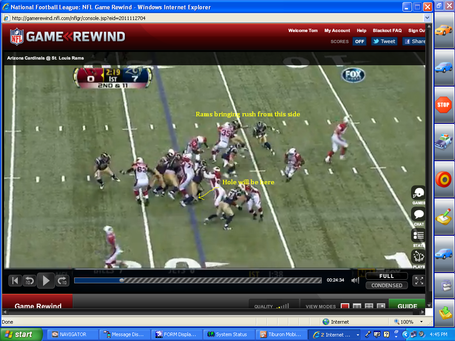 The Rams were bringing an overloaded pass rush from the right side of the Arizona formation, and the run play was designed to go left, away from the oncoming herd of defenders. 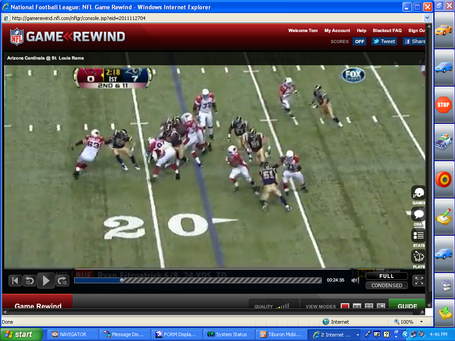 The linebacker who had contain gets kicked out, Wells hits the hole, and only the fact that a defender didn't give up saved a touchdown. This was just the most spectacular of his plays. He also had a 53-yard run and a seven-yard touchdown. His only negative was a fumble he gave up, and it was very close to down by contact on the replay and likely should have been challenged. The Cowboys are going to need to make sure they contain him.

Beanie was, to a large extent, the entire Arizona offense in the game. Skelton could only manage 106 yards passing, and Larry Fitzgerald, one of the NFL's better receivers, was largely irrelevant. Time after time there would be a receiver open, and Skelton would throw the pass high. But that may have little bearing on the game Sunday.

Defensively, the game was much more consistent for the Cardinals. There were three players that stood out to me.

Sam Acho is their rookie edge-rushing linebacker, who wears the same number as DeMarcus Ware and who plays a similar kind of game. He got two sacks in the game. 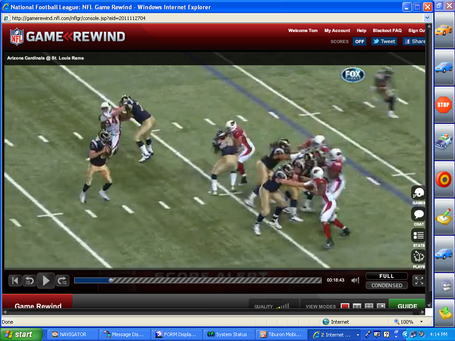 In this one, you can see how he has the tackle beat and is ready to drive through. This will result in a fumble, recovered by Arizona. Acho's two sacks were the only ones, but there was a lot of pressure on Bradford throughout the game. 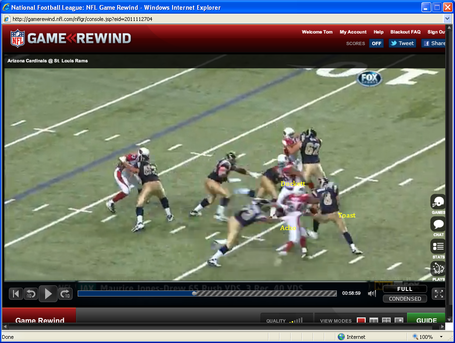 This one shows the second sack, but it also shows the second player that caught my eye, DT Darnell Dockett. Like DWare in the Miami game, he did not get a lot of plays in the stats sheet, but he was disrupting the plays all day. And on a second Rams fumble, it was Dockett who jarred the ball loose - and Acho who fell on it (although this was also a play that might have been overturned on review, since Acho did not appear to get control of the ball before he went out of bounds, which would have let the Rams retain possession).

The third guy that stood out was linebacker Daryl Washington. Whether it was blowing up a screen, defending passes over the middle, or just laying some wood, he was all over the field.

The Cardinals defense was impressive overall, holding the Rams to 268 total yards, giving Sam Bradford fits and keeping Steven Jackson under control. They did show some blitzing, and this may be a vulnerability as the Rams got their only offensive touchdown when they picked the blitz up and Bradford was able to complete a 16-yard touchdown pass.

One of the other defenders is cornerback Patrick Peterson, who had a good day with five tackles. But that is not why you may have heard his name. He, of course, tied that NFL record for punt returns. That was all over the news, and it was a brilliant return, set up by beautiful blocking that let him streak untouched right up the middle of the field.

What you may have not heard about was that Peterson was the second player to return a punt more than 80 yards for a score in the game. In the first quarter, the Rams' wide receiver Nick Miller went back to take the Cardinals punt. Miller was just barely on the team, having been resigned on Novermber 25th (that's Friday before the game, folks) after spending a couple of weeks with the team in October and then getting cut. He took the kick at his own 16, and the Rams set up a wall that let him go down the left side of the field without anyone even coming close to him. Special teams giveth, and special teams taketh away.

Looking at the Cardinals as a whole, they were not very effective through the air, but Wells carried the day. Defensively they were pretty stout against a struggling Rams team. And you can see that special teams is a mixed bag. The most impressive thing was that they played hard the whole game and put themselves in a position to win at the end. I expect them to put their best game on the field. Quarterback is likely to be a problem, but all the BTB readers know how passers tend to play their best against the Cowboys. And the receivers are a pretty good group, with Early Doucet a solid number two behind Fitzgerald, and Andre Roberts a decent number 3. The tight ends were not very evident in the passing game this week.

It will likely not be a walkover. But the Cowboys have more talent and something important to play for.

But every game is important.