There are a million and one "bury the Cowboys" articles circulating the webisphere right now. I'm not going to waste either your time or mine linking to them. Instead, we'll take a look at some of the news that arose from the game, as well as some early analysis. This team is average. We're not as bad as we felt after last night, we're not as good as we hoped. There are still at least three games left in the season and enough time to augment perceptions.

Dallas Cowboys rookie running back and top rusher DeMarco Murray is out for the season after suffering a fractured right ankle and high ankle sprain in Sunday’s loss to the New York Giants.

His injury is a setback to a Cowboys team that has lost two consecutive games and surrendered sole possession of first place in the NFC East division with three regular season games left.

"It appears like he is gone for the season," Cowboys coach Jason Garrett said.

Murray was three yards shy of 900 on the season and on the verge of breaking Tony Dorsett's rookie rushing record for the squad. His proximity to the mark and season-ending injury only shows just how fickle an NFL season could be. Thanks for all the great 2011 memories, rook. See you in July.

In other injury news, Cowboys might have new center (ESPN) | Mike Jenkins to have MRI on Shoulder (ESPN) | and Sean Lee says wrist is OK (ESPN).

Veteran Sammy Morris, who was once a teammate of coach Jason Garrett with the Miami Dolphins, will be brought in for a look Tuesday, per Archer. Right now, Felix Jones is the only healthy back on the roster with Chauncey Washington on the practice squad.

"They played a lot of coverage where they put a guy over the top of him a lot of the time," Romo said. "We had a couple plays we could have got to him sooner. A lot of the time, the play depends on the time you have. The couple I thought he was going to get the ball, we had to move on and do something else. He had a big play at the end that helped us obviously."

Was there ever a non-winning sequence as scintillating as Sean Lee's interception followed two plays later by Dez Bryant in the clear last night, and then his Cruz-mocking salsa dance? I don't think Dez has written the last chapter in this 2011 version of the rivalry. This team may not be good enough to do damage in the playoffs, but it is good enough to end the Giants season in Week 17.

The ebb and flow of a classic NFC Easst game, in graphical format. What you're looking at is the probability of a win for each team after each play. To look at specific play-by-play, follow the link to ANS. 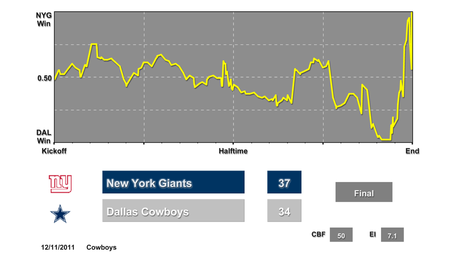 Lengthy discussion from throughout the Cowboys-Giants game last night. Here's a few highlights but go read the whole thing.It highlights one of the many things that stats, announcers and fans alike can never tell you about the nuances of each game.

Danny Tuccitto: I'm starting to get the feeling that Dez Bryant is going to end up with one of those Jacoby-Jones-esque DYARs this week, and it's entirely because Romo can't seem to hit the farm tonight, let alone the broadside of its barn.

Aaron Schatz: Ha! You'll have to take that back, because Romo found Bryant WIDE OPEN for a 50-yard touchdown. And I mean, wide wide wide open. What a blown coverage.

Eli Manning, meanwhile, has made some ridiculous throws in this game with guys in his face. He just chucked it 25 yards to Victor Cruz while falling backwards with a guy in his face.

Danny Tuccitto: Progression to Romo's Bryant-accuracy mean was inevitable at some point. Also, I'm wondering what the game-charting record for "blown coverage" touchdowns is between the two teams combined.

To make a self-serving philosophical point, some of the blown coverages in this game are perfect examples of why having the All-22 film for every play would be nice. I know one of the blown Cowboys coverages was because they were simply caught off-guard after a hasty substitution. However, what about some of the others Specifically, were the offenses setting them up earlier in the game? That kind of chess-game stuff is totally inaccessible without the All-22 film, and I personally think a lot of the unexplained variance in play-by-play football analysis is contained in that black box.

Felix Jones, Tony Romo and Laurent Robinson up, Rob Ryan down. Nothing really extraordinary in the link though.

Every scenario one could think of, but here's a bit of the upshot...

So, a couple of notes:

This is Ryan's ninth season as an NFL defensive coordinator, with Oakland, Cleveland and the Cowboys. In that time, his teams are 28-61 (.315 winning percentage) through November 30 and 9-27 (.250) from December 1 through the end of the regular season. (Ryan has never been with a winning team as a DC, let alone a playoff team.) In those 36 late-season games, Ryan's defense has allowed 30-plus points 15 times.

"Guys, very disappointing. Major game for both teams, my hat's off to the Giants. They didn't quit, they came back, and they played well right at the end. Eli and the entire team came back and got the win. I know every Dallas Cowboy fan is disappointed. We are disappointed, and we certainly know that we've got our work cut out for us. Maybe give you guys something positive to write about. That's all I've got."

Garrett and Romo postgame | The Mothership

HC and QB take to the mics following the disappointment.

EPA is this site's version of "properly measur[ing] the value of possible outcomes." In essence, they take the yardage gained, field position and game situation into account to assign a value to each play's success. Each down/distance at a specific point on the field is assigned a net point value, basically how many points should be expected on the play (EP). Each play can then be measured by whether or not the result added or subtracted from the expected points a team should have received. Here's ANS' full explanation, but in a nutshell:

Suppose the offense has a 1st and 10 at midfield. This situation is worth +2.0 EP. A 5-yard gain would set up a 2nd and 5 from the 45, which corresponds to a +2.1 EP. Therefore, that 5-yard gain in that particular situation represents a +0.1 gain in EP. This gain is called Expected Points Added (EPA). Likewise, a 5-yard loss on 1st down at midfield would create a 2nd and 15 from the offense’s own 45. That situation is worth +1.2 EP, representing a net difference of -0.8 EPA.

Here is how Dallas looks in comparison to the other 32 teams after most have played their Week 14 games. You can not only see the rank, but how much better/worse they are than their counterparts. Dallas is 5th in offensive EPA and 13th in defensive EPA. 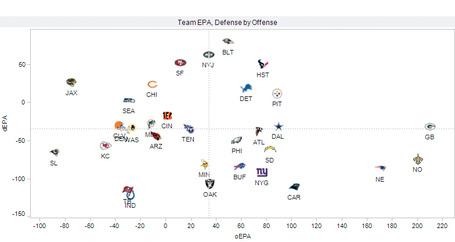