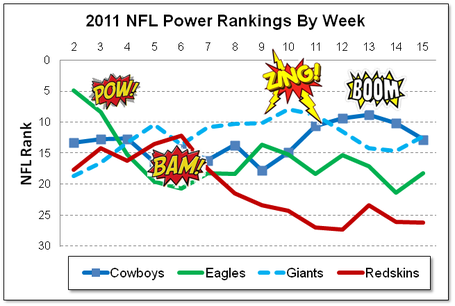 Look at the graph of the weekly NFC East Power Rankings above: Every time one of the NFC East teams found themselves in or close to the top ten they got a serious beatdown in the following weeks.

The Eagles started this nuisance. They're the only NFC East team to have ranked in the top five, and their descent down the power rankings was brutal. Especially because the Eagles were adamant that you can't design a defense to stop Michael Vick.

It's hard to believe now, but early in the season, the Redskins were 3-1 and were the highest ranked NFC East team heading into week six after their early bye. Since peaking as the 12th ranked team in the NFL, they've gone 1-8.

The Giants were the flavor of the month heading into week ten. They were 6-2 and two games clear of the Cowboys, but then went on a 0-4 tear that only stopped when they met the Cowboys - who themselves got a taste of the Power Rankings kryptonite when they peaked at 7-4 heading into week 13. Which NFC playoff contenders are up for their dose of kryptonite? Find out after the break.

WEEI.com: 12th (10th). "The Cowboys have had a fourth quarter lead in five of their six losses. In those six loses, the Cowboys have been outscored 70-31 in the final quarter. Super Bowl caliber teams get better in the fourth quarter - they don’t collapse. Dallas is clearly not a worthy playoff contender."

Covers.com: 12th (10th). "It was déjà vu all over again for the Cowboys. Game-ending field-goal debacles have them suddenly looking up at the Giants."

ProFootballTalk.com: 13th (8th). "If Dan Bailey were any more iced, he’d be a beer at the bottom of a cooler on the 4th of July."

Sporting News: 13th (9th). "It's ridiculous for anyone to blame the Cowboys' frustrating 7-6 record on Romo. On one very inconsistent team, he's becoming the one guy you can trust every week."

CBSsports.com: 13th (9th). "Is that defense overrated or what? They can't cover anybody. And where was that vaunted pass rush against the Giants?"

Drafttek.com: 13th (9th). No comments from the draft gurus.

ESPN: 14th (9th). "Statistics show there is no such thing as icing the kicker, but don't tell that to Dan Bailey or the Cowboys." ESPN's NFC East blogger Dan Graziano added this takee on the Cowboys:

What a difference a blocked kick can make. The Giants are this week's biggest riser and the Cowboys are this week's biggest faller. I can't help but wonder how dramatically different the rankings would have looked if that seesaw game had teetered the other way. But it did not, as we have discussed, and the defensively challenged Cowboys tumble and face the final three games without their starting running back. Dallas actually tied for 13th this week but lost the tiebreaker due to the Titans' having won more recently. So you could argue them ahead of Tennessee, sure, but then the next three teams ahead of them all beat them, so you kind of run out of argument a little bit there.

National Football Post: 14th (9th). "The Cowboys had a chance to take control of the NFC East - at home."

SB Nation: 14th (10th). "The Cowboys have had a few chances to take a commanding lead in the NFC East but two losses in a row now have them tied with the Giants for the division lead."

NFL.com: 14th (12th). Elliot Harrison provides the ranking and the comments: "No team in the 92-year history of the NFL beats themselves more than the Cowboys."

Fox Sports: 15th (15th). Brian Billick: "When I watch the Cowboys, I see a team with an offensive coordinator and a defensive coordinator, but I just don't see a head coach. This is an issue Jerry Jones will need to address in the offseason. Jason Garrett has what it takes to be an excellent coach in this league, but in my opinion, they would be better off if he relinquished play-calling duties, and focused solely on the head-coaching responsibilities."

WhatIFsports: 8th (6th). These guys simulate every possible match-up in the NFL 100 times, and use the winning percentages from those nearly 50,000 games to evaluate every team, with updated rosters and depth charts.

Oddsshark: 10th (6th). Oddshark use a multitude of stats to establish an offensive and defensive power ranking, which they then adjust for the remaining strength of schedule.

Teamrankings.com: 19th (16th). This site measures the relative strength of all teams using team performance, home/away status, margin of victory and other factors.

Below is how the remaining NFC playoff contenders fared in this week's power rankings - with the Eagles left in, just because.