Share All sharing options for: Dallas Cowboys: Video Review Of The Next Opponent, Tampa Bay Buccaneers

Sometimes when a football team stinks it up, the coaches will just throw away the video of the game, because they think there is nothing to learn from re-watching how badly they sucked.

For the upcoming game against the Tampa Bay Buccaneers, the Dallas Cowboys might want to think about giving the game film of the Bucs game against the Jacksonville Jaguars the same treatment. Tampa Bay was bad. Epic bad. In every phase of the game. For almost the entire 60 minutes. I don't know that there is a lot for the staff to learn from watching this hot mess.

The Jaguars, who have only won four games counting this one, laid a 41-14 walloping on the Bucs. I sorta feel sorry for the coaches who will spend some time studying this game, because that was some coyote ugly football.

One thing I am almost certain of. The Cowboys are not very likely to beat Tampa Bay by that large a margin. I simply do not believe they can stink the house up that badly again. I seriously expect a two to three score victory, because there are many areas to exploit. But don't go in counting on the 'Boys putting up 40 or 50 points. The Buccaneers handed two touchdowns to the Jags. I mean, literally. Look at where the ball is in the picture. You can't make it any easier than that.

More of the ugliness after the jump

The game actually did not start out too badly. The Buccaneers got off to a fast start. Taking the opening kick, and aided by a facemask penalty that kept them from going three and out, they went 80 yards and got a touchdown. Josh Freeman made some good passes, and his receivers hung on - something that would not happen all game long, on either side of the transaction. They were able to handle Jacksonville through the first quarter, and then Ronde Barber made his brother Tiki feel even worse about retiring so early by picking off a pass and returning it to the Tampa Bay 48. They exploited the short field, and Freeman showed some good mobility in a scramble up the middle from 13 yards out to score the touchdown. With 14:09 in the second, they were up 14-0.

And that was all she wrote. The Jacksonville Jaguars scored 41 unanswered points. 28 in just the last 7:36 of the second quarter. With stunning ease. Maurice Jones-Drew kept getting good runs, usually right up the middle. Blaine Gabbert picked their secondary apart. Blaine. Gabbert.

It all started with a fumble on a punt return. (I apologize about the quality of the screenshots, but I am having technical difficulties and this is the best I can get right now.) 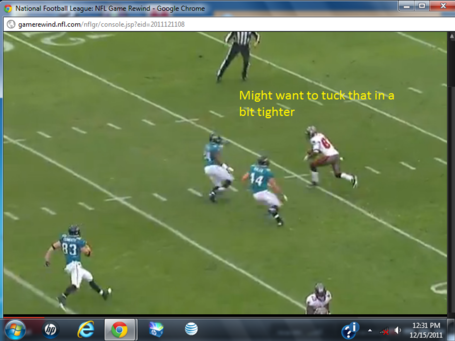 Here is the start of it. Preston Parker has the ball and is trying to put some moves on. Then he gets hit. 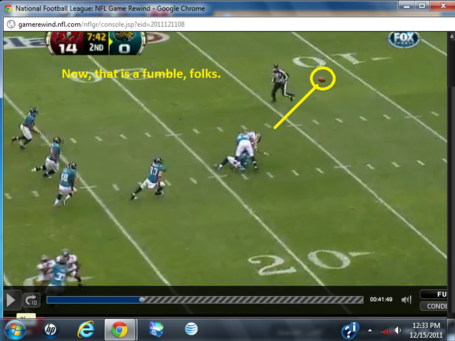 That ball goes about fifteen feet up in the air. I don't remember ever seeing a fumble shoot out like that. You notice Jacksonville's Colin Cloherty (83) locked in on the ball. He will get the recovery at the 8 and take it in for the touchdown. Talk about a momentum shift. And this play pretty much sums up the rest of the game for the Bucs. If it could go wrong, Murphy's law was in effect.

The Jags got another touchdown on the gimme in the picture I put at the top of the article, and two rushing and two receiving TDs from Jones-Drew, who set his franchise's record for touchdowns in the game - and it could have been worse. Tampa Bay gave up three interceptions and four fumbles, and had two other fumbles they managed to hang on to. And because the Jags' kicker was injured late in the game, the new Jacksonville coach went for a two point conversion (which failed) and then one of the linebackers had to try the kickoff, which dribbled 20 yards.

But the killer was the 28 point second quarter for Jacksonville, which wiped out the decent start and put Tampa Bay in a hole they pretty much never had a chance to climb out of. And it was not like the Jaguars were playing a great game themselves. Gabbert threw two picks, and the Jags put the ball on the ground twice (but were able to get on top of the ball).

I just don't see much here of value to the coaching staff, or to us, in trying to figure out this game. Because of how badly things went, there are two dangers here for the Cowboys. One is the old trap game. But given how things have gone the past two weeks, I don't think that is the biggest worry.

What does concern me is that the Buccaneers are now a bunch of frustrated, really, really angry players. This game could wind up getting nasty, and people could get hurt. They have nothing to lose, but are just playing for their pride, and might not be completely in control.

Of course, as I said it is likely that Tampa Bay will have a less inept game against the Cowboys, so I did look for some possible weapons they may have.

One effective player for them was LeGarrette Blount, who had a decent day running the ball. He looks to be a big banger who can go up the middle and take some tacklers with him. Freeman did make some good throws in the game, although he got benched in favor of Josh Johnson on the last drive (who promptly joined in the fun by throwing an interception himself). It is hard to tell much about the receivers from the game, since passes were spread around to 10 different receivers, none of who got more that 3 catches or 38 yards.

Defensively, Albert Haynesworth is on the team, which says something all by itself. Outside of that, one of the things I look at is who is making the tackles. The leading tackler and three of the top four for the team were from the secondary, which I tend to interpret as the front seven getting penetrated a lot. Ronde Barber still looks good.

But mostly there is not a lot there that stood out. Obviously they had no solution for Jones-Drew. And offensively they just kept shooting themselves in both feet and any other part of the anatomy that got in the way.

If they play much the same, Dallas should cruise. If they play to their best ability - well, I still think Dallas wins by at least 10.