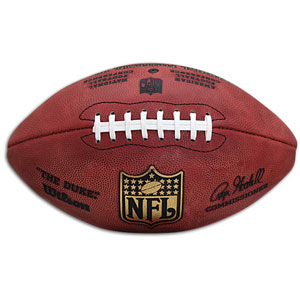 The year started off strong with the Game Ball series but after a few devastating losses I tailed off the series. I must admit the original idea was a good one and you can now see game ball posts around the net which is pretty cool. It's inching closer towards the end of the season with only three games left and I thought this was a good time to acknowledge the winners of the game ball of the year on offense and defense.

Every year is an interesting one with the Cowboys. This year didn't hold back on it's epic Hollywood type of drama and there were a bunch of breakout performers. Laurent Robinson went from a bust of a third round pick into a #1 wide receiver for the Cowboys. Words cannot describe how important Robinson has become to this football team. He has the size and speed of a legit #1 wide receiver and the Cowboys need to resign him. Robinson has come out publicly recently and stated his love for this team and wants to be a part of it for the future. The Cowboys brain trust better pay this man because replacing him takes two step backwards, while signing him gives this offense the best three WR's in the NFL.

The Cowboys have also been searching for a premier fullback for a few years now and finally landed one. Tony Fiammetta is another vital piece of the offense and needs to be locked up long term. The run game appears to just click and operate at a higher level with him in the lineup. If he can get this mysterious illness under wrap, he then deserves a long term deal.

DeMarco Murray didn't receive the love from fans early on when he was selected in the third round of the 2011 NFL Draft this past April. Murray missed most of training camp with a hamstring injury and appeared to be on the path of a redshirt season, but no so fast folks. With Felix Jones nursing injuries of his own, in comes the electrifying DeMarco Murray and he ran his way into the record books. With the Cowboys lacking a true run game for the better part of the past 2-3 seasons, they finally found their answer with the next great Oklahoma running back. Murray's season was cut short last week with an ankle injury that needed surgery. I want to point out Dez Bryant had a similar injury the end of his rookie season and recovered just fine. I believe Murray has the skills to be one of the leagues premier players not just running back. Get healthy and come back strong kid, we believe in you.

My boy and pet tiger (cat) Tyron Smith did everything I expected him to in his rookie season. The youngest player in the NFL quickly became one of the leagues premier offensive lineman in his rookie season. After giving up a couple of sacks in the blowout to the Eagles fans quickly jumped on Tyron and began having their doubts. Through that adversity Smith went on to work out the kinks in his game, thus proving himself again to the fan base. At just 21 years old, Smith is one of the best players at his position in the entire NFL. Like a fine wine, he is only going to improve. I said last year this kid would be a beast and a instant starter, I was right.

Now onto the winners... 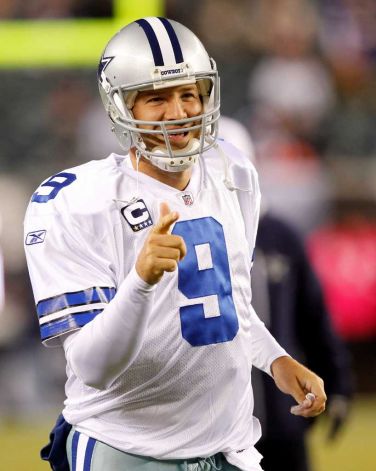 This should come as no surprise to you, Tony Romo is having arguably his finest season yet. At 31 years of age Romo only continues to improve his game and enter himself among the leagues elite quarterbacks. Romo had some terribly rough games early on in the season. He played great almost perfect football for three quarters in the season opener to the Jets, only to play questionable football in the final quarter. Then he goes out to San Francisco, fractures a rib and has a collapsed lung. Romo went on to play through the injury and ran out of the tunnel as a folk hero. After that overtime win we thought we saw the last of Romo's questionable play. Against the Lions the Cowboys blew a huge lead and the questions arose again around Romo and if he could take this team to the promised land.

Since that Lions game Romo has answered his critics and myself. I have been a harsh critic of Romo for the simple fact of how good I think he can be. I am starting to believe Romo is somewhat of a slow starter and really gets better as the season goes along. One cannot deny the weapons the Dallas Cowboys have on offense, but Romo is what makes this team go. The team will only go as far as Romo goes. Romo has the accuracy, arm strength and intelligence that you look for in a quarterback.

Perhaps his best trait is something that you either have or don't, it cannot be taught. Romo has this uncanny ability of extending plays and making a simple play that is designed to pick up a few yards into a big one. His lightning quick release is the best in the NFL. He is slippery and athletic that opposing defenses are truly happy sacking him because of how hard it is to get him down sometimes. Year in and year out we see the amazing big play capability that Romo has. Being such a great athlete that plays basketball and soccer does translate into quarterback success.

Romo still has three games left to pad his stats but already has thrown for 26 TD's and just 9 INT's, most of those INT's coming from earlier in the season. Romo should easily eclipse the 4,000 yard mark and his completion percentage is at 65%. It will never be a production or stat issue with him and Romo knows this. He knows that hardware is what a quarterback is judged by. He is one of the hardest workers on the team and has grown into one of the teams few leaders since 2009. If he were mic'd up every week a lot of the analysts would shut their mouths.

Tonight Romo must lead the Cowboys to a win in Tampa Bay against a young and talented defense. Really no matter who he has faced, Romo has lit the opposition up in a big way. The emergence of a Cowboys run game and DeMarco Murray gave Romo the support he desperately needed. He has three big time WR's and a hall of fame tight end. The offensive line is a work in progress and should be optimized by next season.

With all of these weapons and a even more improved offensive line, Tony Romo has the talent to win. When the Cowboys finally figure out how to close games, he will lead us deep into the playoffs. Romo has easily been the Cowboys best player this season yet again.

2011 was a big year for Tony Romo. He got married and has a child on the way. This is a player we have watched grown up before our very eyes. He is a tremendously great person and I want to see him win a Super Bowl in the worst way. It would be a fitting end to a great statistic career by one of the most exciting and polarizing players in league history. I am all in for Tony Romo and he is all in for the Cowboys, I don't know what more you could ask for in a signal caller. 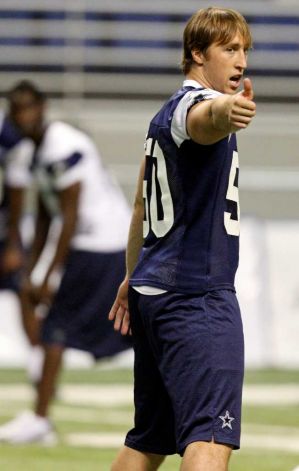 "With the 55th pick in the 2010 NFL Draft....The Dallas Cowboys select...Sean Lee LB Penn State" From that moment on Sean Lee had big shoes to fill in the Cowboys organization. Not only did he have to come to one of the most covered and scrutinized teams in the world, Sean Lee had to battle the Barbie Carpenter label many fans labeled him with.

Many fans had wanted a safety that year and bashed the pick. Coming off a knee injury it was a risky pick for the franchise but boy did it work out. After coming off of a promising 2010 season, Lee was finally penciled into the starting lineup and quickly became a focal point of Rob Ryan's new 3-4 defense. I saw 2011 as a breakout campaign for Sean Lee and wrote a fan post about how good he was going to be in 2011. Lee didn't disappoint me as he quickly looked like an emerging star.

In the opening night slug fest against the Jets, Lee showed the world on a nationally televised NBC game that he was one of the best linebackers in the NFL. The NFL credited Lee with 12 tackles and he was a monster that was involved in every single play. If you watched that game you saw #50 all over the place. His biggest play came on a interception that he almost took to the house.

Since that Jets game Sean Lee has entered his name into the leagues elite linebacker class. The area that I think Lee has all surprised us has been in pass coverage. When I looked at his combine numbers it showed me he had the speed and athleticism to be a play maker. Lee leads the team with 4 INT's and that is remarkable in itself. Having Lee offers the Cowboys versatility in play calling, the problem is grey beards Bradie James and Keith Brooking are so horrendous in coverage that teams attack them.

You also cannot overlook Lee's performance with a club on his hand. 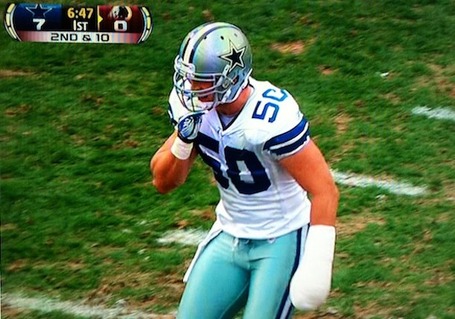 Lee was hurt the Eagles game and when he went down it was a huge loss. It could have been a lot worse and Lee only managed to miss one game. He played with a giant club on his hand and was still excellent, that amazes me that he would even play with an injury like that. It has to be relatively hard for a linebacker to tackle yet alone play with that club on his hand. Since then Lee has had the club reduced each week and is now sporting a smaller cast which he somehow still catches footballs with when he picked off Eli Manning last week on a tremendous play.

Lee has transformed into one of the leagues best young players and all around best linebackers in just his second campaign. The Cowboys had a first round grade on Lee and many people laughed at that idea, but who is laughing now? The Dallas Cowboy Chuck Norris may be the steal of his entire draft class which is remarkable when the Cowboys also landed Dez Bryant that year.

Sean Lee is one of the most important players on this defense, he is just irreplaceable in my opinion. I could have went with DeMarcus Ware here with this award but I went with Lee for a multitude or reasons. Both are worthy recipients of the award, lets be crystal clear there. I see Lee going down as one of the best inside linebackers in league history. That is how talented this kid is. The crazy part is just that, he is a kid at just 25 years old and we will hopefully have him for a long and storied career. Lee was one of the first players at Valley Ranch and is one of the last players to leave. His passion and hunger for the game will make him a leader on this defense for years. Next year we will see Lee take the next step, leadership.

You are looking at your next captain and leader on the defense. When Charles Haley announced this pick some of you were not believers. Almost two years later, you have to be a believer in what Sean Lee can do on and off the football field. He is a star on a defense lacking star power, but is an emerging force in the NFL. 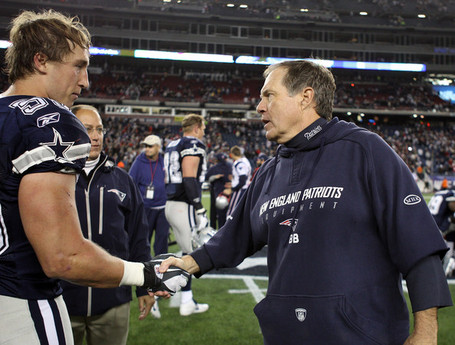