In the scope of the 2011 season, the play upon which all further discussion will be related to was meaningless. In fact, even in the scope of the game itself, it was largely insignificant. It was 1st-and-10, 12:15 minutes left to play in the third quarter. Save for the minor hiccup (bad Doug Free. Bad. Stop it. I said Stop it. STOP IT!!!) that occurred on the previous drive resulting in Tampa's first TD, the blow out was on and the 'Boys were coasting. It was a simple quick slant, a play we have seen Romo execute thousands of times. There was Dez, open and ready to catch the ball. After showing off some phenomenally athletic juggling skills, Dez was able to haul in the pass for a nice 5 yard gain. When the refs blew the call, Garrett respectfully informed them of their error and they thanked him for his graciousness by overturning it. The game continued on with Dallas making their attempt at 2nd and 5, and the rest is history. The Cowboys won and reasserted themselves back atop the NFC East (with a little help from our hated rivals friends the Redskins).

But wait, let's get back to that play for a moment, shall we? Yes, it was a fantastical display of athleticism, the type of play that can only be made by a handful of people alive on this Earth. But could it have been something more? Something special? Something that cannot be explained by logic or faith? Could it be, that maybe, just maybe, the entire season of these 2011 Dallas Cowboys was played out within the split second that the ball hung in the balance? Let's go back and over analyze every tip, tilt, and lean that the ball took and find out.

Part 1: The Ball Is On Its Way / Preseason 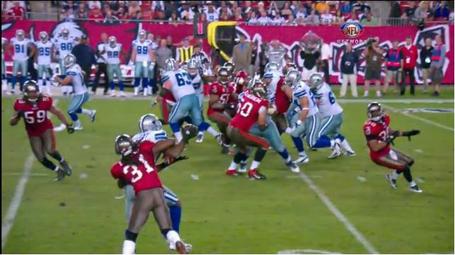 Explanation: Here in the first screen, we have the ball being delivered perfectly on target by Romo. He puts it on the hands of his receiver, and the play is off to what looks to be a good start. Let's treat this as the preseason. However shortened and crammed in it might have been, the 'Boys looked to be on the right path. An influx of youth coupled with the veteran talent looked like a combination that may prove to be productive, all being guided by the steady hands of Sgt. Garrett and Lt. Grey Beard. 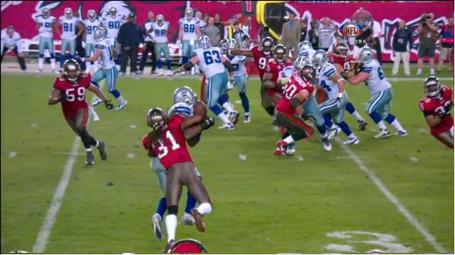 Explanation: Despite an on target throw, Dez is unable to initially capture the ball within his grasps. The defense is strong, converging upon Bryant at the same moment the ball gets there. Here, we can see the first 7 games of the season. A true roller coaster full of MDMA-induced blissful highs and clinically-diagnosed depressive lows. The Jets, Lions, and Patriots all were games bobbled by the Cowboys as a team, just as Dez is seen here bobbling the ball (the Eagles were a stone-handed drop, but stick with me here). Whether or not we could recover was up in the air, the season hanging in the balance. 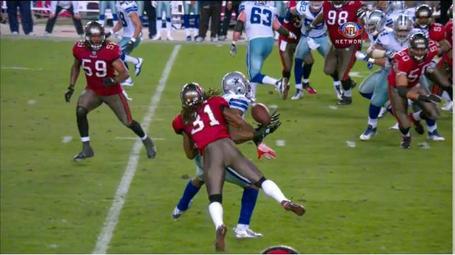 Explanation: Here we see Dez recovering from his initial bobble. The ball is nearly totally engulfed in Bryant's hands, and he seems to be in complete control. The catch is about to be made, the play completed. This screen represents games 8 through 11, all wins by the Dallas Cowboys. It seemed as though we had recovered from our heart-attack inducing first half of a season. We looked strong. We imposed our will upon the Seahawks and Bills, and managed to scrap our way to last-second victories against Washington and Miami. We were atop the NFC East as division leaders, and all was good in Cowboy land. 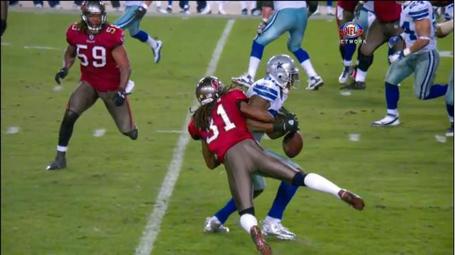 Explanation: Oh boy. That's trouble. As we can plainly see, the ball has slipped through Dez's glue-like hands and is starting to plummet towards the ground. Alas, here we have the Cardinals game. What a lost opportunity, leaving the chance to make the next few weeks much, much easier upon ourselves on the table. The chance to make the impending Giants battle far less important than it needed to be. But, a lost opportunity again in the desert, and the battle for the top of the division was about ready to commence.

Part 5: All Hope Is Lost / The Giants Game 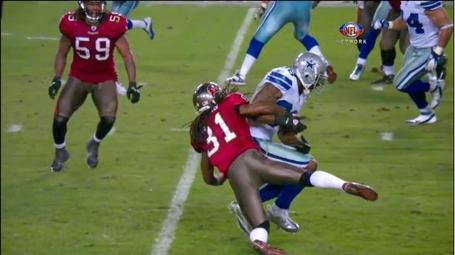 Explanation: Where's the ball? Where's the ball Dez? Where is it? It's gone, that's where it is. Lost forever. Washed away into the ocean. Sucked into a black hole. No chance that Dez makes this play. An opportunity was lost here, and nothing left to do but saddle up and try again next play/ year. That was the consensus reaction of the Dallas fan base after the Giant fiasco we all witnessed on national TV. The season was lost. We were now on the outside looking in on the playoff picture, and the hope to get back into it was at a critically low level. No matter that we still controlled our own destiny, our team was treading water and looked to be on the verge of drowning. 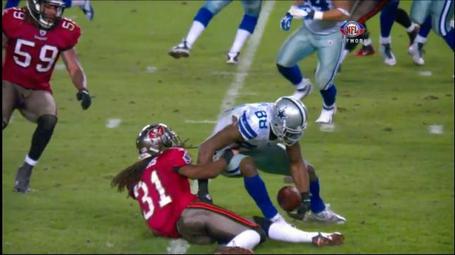 Explanation: Oh. My. God. Where did that ball come from? Oh yea, duh, Dez Bryant is a Jedi and should never be discounted from making even the most outrageous plays. He reached his hand into the black hole and stole it away from the depths of despair. Somehow, he has righted the ship and appears well on his way to finally completing the catch. This fits perfectly the game in which this over analyzed catch actually occurs in. The 'Boys took care of business and managed to put their hands firmly within reach of the initial goal of making the playoffs. Sure, we have to show up and finish the job, but we're still fighting. And there is nothing wrong with that. 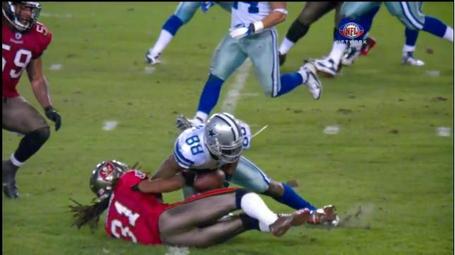 Explanation: Here we see Dez finally finishing the job. He makes the catch, completes the play, and most importantly, does what he is supposed to do. One catch, and five yards closer to the end zone. Have a good first down and give yourself an improved chance at completing the first down and continuing the drive. Now, as we all know, the Cowboys have not yet finished the job. The haven't completed the season, and there is much work left to be done. But, since this catch depicts our whole season, lets say that Dez pulls his best Nostradamus impression and in this case, that means the Cowboys are going to the playoffs. No promises once we get there, but the sheer fact of this group possessing enough fight and will to get this team into the playoffs would be impressive to me. Now let's just hope Dez and I are correct in our predictions. Who knows, maybe it will end up like this... 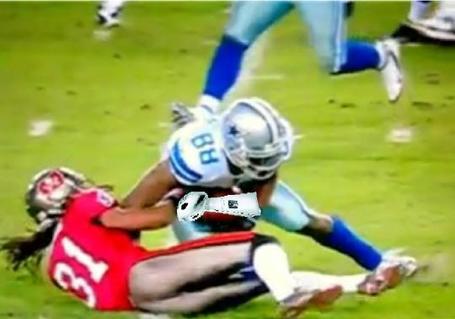