Dallas Cowboys Next Opponent: Review Of The Eagles Last Game

Share All sharing options for: Dallas Cowboys Next Opponent: Review Of The Eagles Last Game

There is a problem trying to look at the game between the Dallas Cowboys and the Philadelphia Eagles: Figuring out which version of both teams is going to show up.

This is a pair of teams that have been consistent only in their inconsistency this year. One week they are very good, another week they are struggling in close games, and sometimes they just look bad. Add in the old saw about throwing the record books out when NFC East rivals meet, and this looks to be a highly unpredictable matchup.

The Cowboys are going to need their A game all the way around. The last meeting between the teams rankles and hopefully will motivate Dallas to take some measure of revenge against the Eagles for that 34-7 embarrassment.

So what will they have to do? Well, it would be nice if the "bad" Eagles, the ones that lost to Buffalo, Chicago, and Seattle, showed up. But that is not likely, and certainly not something to build a game plan on. I took a look at some video and some of the numbers from the Eagles 45-19 win over the New York Jets to try and get some ideas about what the Cowboys need to do to beat them.

My perceptions after the jump.

I had thought about going back to the Dallas loss for my review, but there were two reasons I decided not to go that way. First, of course, was the projectile vomiting that watching that game was likely to induce in me. But I would have done that for the team if need be. More to the point, that was in week 8, and the more time passes in the NFL, the less relevant the lessons to be learned. Teams change, evolve, and mostly suffer injuries. So it is better to look at the latest performance and try to draw conclusions, and forgo puking on the carpet.

This is actually a key part of their use of the Wide-9 defense. I know that ESPN is kind of a dirty word around here, but if you take a couple of minutes and listen to this discussion, it will give a nice summary of how it all works, starting at about the 20 second mark.

The Eagles got up 28-0 (told you it was similar) in the first half. The first two scores came on a rather nightmarish sequence. It started with a fumble by Santonio Holmes that was returned by the Eagles for the first touchdown. Then the Jets had a chance to even things up when Curtis Marsh muffed a punt and gave New York the ball on the Eagles' 14 yard line. But on the next play, Mark Sanchez was intercepted by Asante Samuel, Michael Vick and company drove smartly down the field for a 14-0 lead, and the rout was pretty much on. The Jets would suffer another self-inflicted wound later in the half when they fumbled the ball at their own 21 (with a return to the 17), setting up the fourth touchdown.

On the surface, it sounds like the Jets really were beating themselves. But they had plenty of chances to get back in the game, especially in the first half. I already mentioned the muffed punt (and I never pass up a chance to mention a muffed punt, for reasons I will leave to you to figure out), and there would be two more Philadelphia fumbles recovered by the Jets before halftime. The problem was not lack of opportunity for New York, it was failure to capitalize. Both teams got three turnovers from the other before halftime. Philadelphia converted their chances into 21 points. The Jets only managed 10. That, I think, is the main difference in the game. The Eagles were playing just as sloppily as the Jets, but they were much more efficient when they did hang onto the oblate spheroid.

This is an area of opportunity for the Cowboys. The Jets had every chance to keep up with the Eagles, and squandered them. Dallas certainly has the offensive firepower to stay with them now that Tony Romo has a full complement of receivers. And an effective running game can go a long way in nullifying the Wide 9 if you are not forced into passing on almost every down to try and catch up. One thing that is a plus for the Cowboys is that most of the offensive players are performing better now than during the first Eagles game. Tony is certainly at a high point for the season, and most of the other skill players are at the best level of performance of the season as well. It is, as usual, probably going to hinge on the Yuglies. Jason Babin had a big game, racking up three sacks. He is on a tear right now and has to be handled. But outside of that, Sanchez was only sacked or hit five other times, so Tony may have a chance to exhibit his extend-the-play-and-find-a-receiver skills. And if the Cowboys can stay close on the scoreboard, they can likely get some yards and control the tempo with Felix Jones and Sammy Morris.

If the Cowboys can move the ball and score effectively, then it will come down to slowing the Eagles offense. Here, the two headed monster must be slain. LeSean McCoy had 102 yards against the Jets, and Michael Vick added 32. Shady had three rushing touchdowns, setting a single season team record in the process. Of course, the big danger with him is letting him escape containment and get wide, like in this play late in the game. 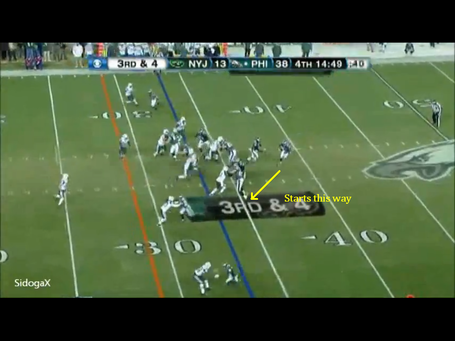 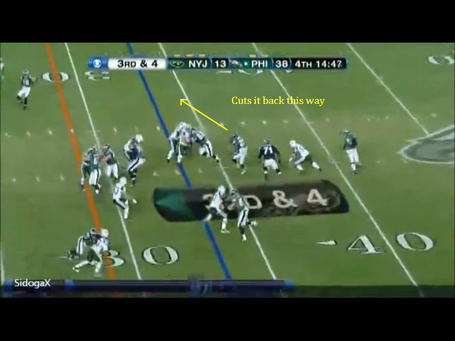 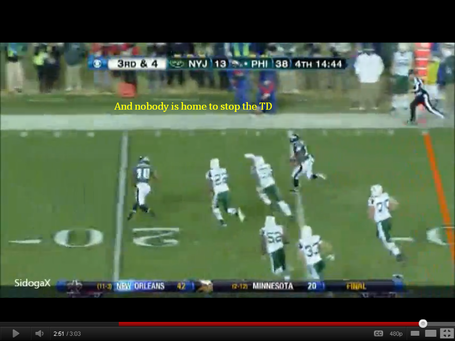 This kind of play allowed them to keep running the ball and limit the exposure passing (Vick did have an interception late). The danger in the passing game was that so many of the completions were for big chunks of yardage - 10 of the 15 completions went 10 or more yards in the air down field, and they accounted for 91.6% of the passing yards. Or, more simply, it was the vertical passing game that paid off.

Brent Celek was the big target for Vick, getting 156 yards and a touchdown on five catches. Here is the second touchdown. 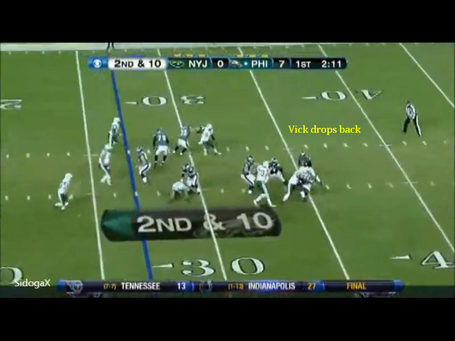 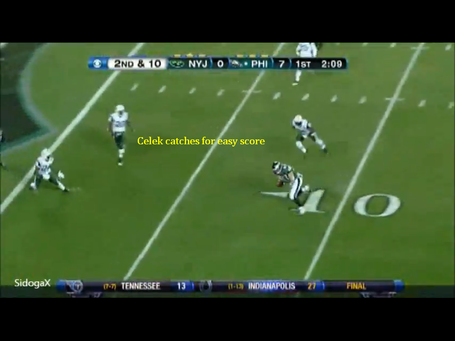 I also noticed that the Jets had 174 yards on kickoff returns (29 per return). Hopefully the 'boys can put someone back to exploit this part of the game.

So basically, the Cowboys need to start the game exactly like they did against the Buccaneers, taking advantage of the other team's mistakes and putting the ball into the end zone every chance they get. On defense, keep the running game contained and force Vick into short passes. The Eagles are prone to turnovers. This will likely be a shootout, and the edge is probably going to the team that plays with the most discipline.

Or at least, that's my take.