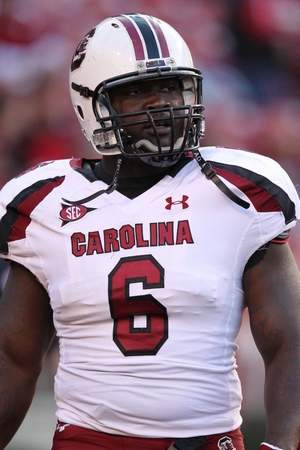 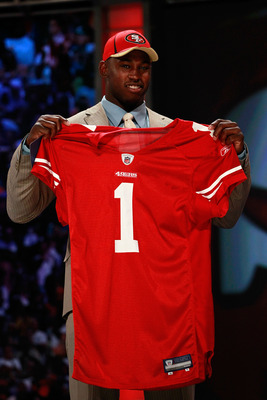 Last year I was extremely high on Aldon Smith. My favorite draft guru Wes Bunting put me on to Smith early on last fall and I began to follow Smith at Missouri. The first surprise of the 2011 NFL Draft was Smith being taken 7th overall by the 49ers. I wrote three articles on Smith last year.

Many on here questioned my theory of Aldon Smith being a faster and better pass rusher than Anthony Spencer. Aldon Smith is tearing up NFL competition in his rookie year. He has been a pass rushing specialist with 13 sacks and 2 forced fumbles. There are two games left and Smith can pad his stats even more.

I was right on about my prediction with how many sacks Aldon Smith could possibly get in his rookie season. This is even more impressive because he isn't starting opposite of a premier talent like DeMarcus Ware.

If we roll with Aldon Smith I guarantee you the kid gets like 10-12 sacks his rookie season off his speed and raw ability alone. You cannot teach speed, ask Almost Anthony. He lacks the speed to be a true disruptive edge pass rusher, while Aldon Smith has the speed to be so much better in that area of the game

In the one article I wrote, I said Aldon Smith would be the next Jason Pierre Paul. JPP has had a breakout season and I knew it was only a matter of time before he did. Aldon Smith did it in his rookie season. Both have similar skill sets and we will talk about Melvin Ingram in a minute.

I find this interesting for a few reasons. For starters I believe Aldon Smith is this years Pierre-Paul. Aldon Smith is very similar to Pierre-Paul in just about every aspect. Both are tall and muscular built defensive ends that have a great burst off the line. Both prospects are 6'4 and are around the 260-270 pound mark. Jason Pierre-Paul was very raw coming out of South Florida last year but he possessed possibly the best skills as a pass rusher in the draft. Flash forward to this year Aldon Smith is young and raw, but could possibly have the skills to be the most athletic pass rusher in this years draft. Aldon could have stayed in school another two years, or even a year to develop his skills. He decided to enter the NFL draft and really when you watch the tape this kid has all the skills to be a great pass rusher.

In my last big board update from last year, I placed Aldon Smith as my #10 player in the entire 2011 class. Honestly I wish I placed him higher, but I was right about him being a great pass rusher. When you are going over so many players you are bound to get some wrong. But the feeling is awesome when you get one right.

Today Wes Bunting and Raf discussed Melvin Ingram in their ongoing draft chats. By the way, the draft talk from those two are like crack for me. They went over Ingram and how he is similar to Greg Ellis. It's a great article and I hope you guys check it out. Bunting started the Tyron Smith and Aldon Smith bandwagon last year, he is also very high on Ingram this year in a weak pass rushing class.

Please take a couple of minutes and check out this article. It is some great stuff. 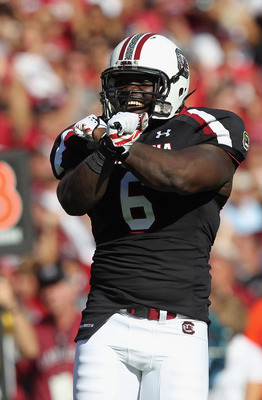 Recently I wrote about three prospects that would make sense for the Cowboys in the first round. Janoris Jenkins, Alfonzo Dennard and Melvin Ingram are the three prospects I chose to write about. My feeling is that the Cowboys need to either draft a cornerback or a pass rusher with their first pick. I am tired of mediocre play from Anthony Spencer and would love to see an upgrade there. Cornerback has to be addressed and you can still land a quality corner in the 2nd-3rd round this year. You will see a steep drop off in pass rushing talent after the 2nd round, so it may be wise to go after one in the first round.

Let me first talk about the RKG philosophy we love so much around here at BTB. Ingram falls under that category and is an extremely hard worker off the field. He has been a big part of the special teams unit at South Carolina. Ingram is a throwback player and I rarely use that term anymore because of how rare these type of players are. A throwback player in my opinion reminds me of the NFL players I grew up watching as a kid. These type of guys contribute in so many areas and were extremely physical players. Ingram reminds me of those guys for some reason. When I see Ingram contributing all over the field, that impresses me.

What I love about him is his combination of size and speed. Ingram is 6'2, 276 and has the size to play outside linebacker in the 3-4. The important skill is speed, Ingram has the speed to be a better pass rusher than Anthony Spencer. Look, Spencer is a good athlete and I don't think we should forget that. But the problem is his lack of speed rushing the passer. We have come to know him as Almost Anthony for a reason and he just simply lacks the acceleration to get to the quarterback. Ingram will not have this problem. Look at what Wes Bunting says about him.

Wes Bunting: I really like Melvin Ingram. I remember telling you about Aldon Smith last year, how Missouri played him inside and outside and what do you do with him in the NFL? Well, he's a pass rusher. He's got elite suddenness and quickness, he's long-armed and he uses his hands well.

Ingram isn't quite the freakish long-armed athlete that Smith is, but he's also sudden inside, he's sudden outside, he can flatten out, he can play with leverage. He's really tough to block one-on-one, and I think he's one of the top pass rushers in this draft.

You can never have enough pass rushers and I think we peg some of these guys as scheme fits. Look, Melvin Ingram can rush the passer and he'd be good to have on your team, no matter what scheme you're playing

Now that is the scouting report I want to see when examining a pass rusher. The best part I read in that article was this.

When a scout tells me you can do whatever you want with a prospect, that jumps off the screen and excites me. Check out Wes Bunting's scouting report on Melvin Ingram because it is way more detailed than mine would ever be.

What I want to get across to everyone in this article is the importance of taking a pass rusher high in the draft, how good Ingram is and just how important it is to replace Spencer. Sure the Cowboys could settle and resign Spencer, but I believe that money could be spent in other areas of need. The Cowboys shouldn't just settle for the chick that likes them. This team needs to go out and get that hot chick, the one who is so desirable and the girl that makes you feel great. I don't want to see this team just settle for the chick next door who loves them no matter what. Go big or go home. Get that dime, don't settle for the nickel.

Ingram is a versatile player who could contribute in so many areas. The best part of his game is pass rushing and we need that. The amazing part of his game is his athleticism and ability to drop into coverage. It's all about his speed and athleticism folks. Speed is such a vital part of any pass rushers game. With improved technique from NFL coaching, we could see Ingram grow into an even more dangerous pass rusher.

Drafting Melvin Ingram would be a home run draft pick for this team. This kid grows on me more each day and I would really love to see him end up in Dallas.