Share All sharing options for: Tracking How Cowboys Head Coach Jason Garrett Tried To Seal The Win Against The Giants

First things first, if you're the type of fan that doesn't like reliving painful memories, I advise you stop reading now. I completely understand if you are, but being an eternal optimist also makes you double as a glutton for punishment.

Just three weeks ago, the Cowboys played the New York Giants in a game that could have all but sealed a division championship. Now, the teams meet again in the rematch and it seems that at least half of the Dallas fan base is already looking towards the off season. I just can't get down with that, no way, no how.

That last Giants loss hurt... hurt something awful and it was pretty hard for most of us to write anything meaningful or insightful. A post idea that I had come up with but never penned was how great of a game I thought Jason Garrett called on offense. The funny thing? I was most impressed by the plays he called on a three and out while Dallas was trying to ice the game. See what I did there?

Win or lose this Sunday, the off season will eventually arrive and one of the first topics of conversation will undoubtedly return to the concept that the Cowboys will need to hire an offensive coordinator to take some of the pressure off young head coach Jason Garrett. If this play call sequence is any indication, I feel it will be much ado about nothing.

With just under seven minutes remaining, the Cowboys were leading 27-22 with the Giants driving. They had just converted on fourth down and were facing 3rd and 9 from the Cowboys 22. Victor Butler, substituting for DeMarcus Ware who had suffered a stinger, leaped into Eli Manning's passing lane to tip the ball. Chuck Norris Sean Lee was being held by a Giants lineman turned around and made a tremendous interception and raced through traffic back to midfield. It was an incredible play by Lee, his fourth pick of the season, which happens to lead all NFL linebackers.

Manning was able to drive the Giants down the field in about three minutes with efficiency, scoring a touchdown to shrink the lead to 5, 34-29. This left the Cowboys offense with the responsibility of running out the clock. Pretty much, two first downs and the game was over. Just one would have made it pretty long odds for New York.

Obviously we know how the game turned out. The Cowboys weren't able to collect the necessary first and gave the ball back to the Giants. But for all the grief Jason Garrett gets as a play caller, I was highly impressed at the plays that he called to try and achieve the first down.

The Giants obviously knew the Cowboys would be trying to run down the clock. On first down, Dallas lined up in Trey Left, a variation of the Deuce Formation where both TE's, Witten and Phillips, are to the left of LT Doug Free and Miles Austin as the Flanker. Dez Bryant is the Split End, wide right, with Felix Jones as the lone running back eight yards deep. 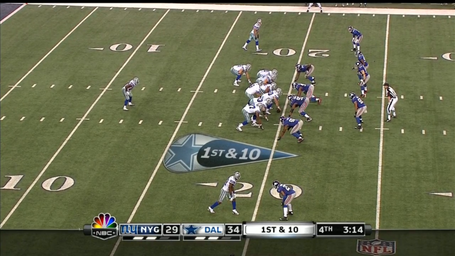 Pre-snap, Austin comes in motion, forcing the Giants to at least consider the end around. 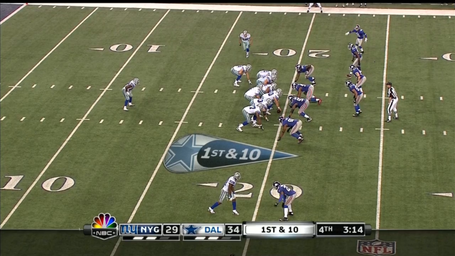 After the snap, RT Tyron Smith and RG Kyle Kosier seal the Giants LDT and LOLB to create the wall. F-Back John Phillips pulls to the right to pick up the LDE Justin Tuck who waits for the play to develop. 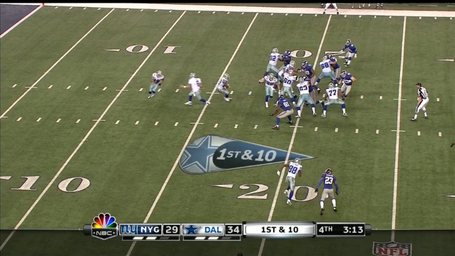 Felix is four yards into his five-yard-gain before he's touched by a Giants defender. 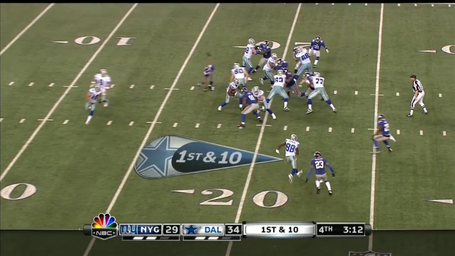 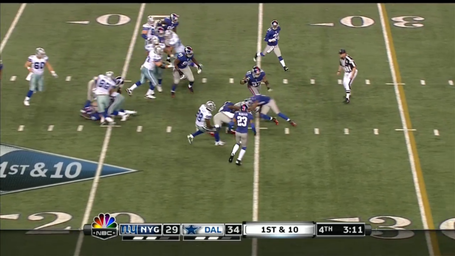 This play would be called a success by any measure, but definitely by the formula that a first down play needs to gain 40% of the necessary yardage to garner another set of downs.

On second down though, the execution would not be successful. The Cowboys deployed from the huddle in a standard I formation with TE right, Austin as the Flanker Right and Bryant split left. 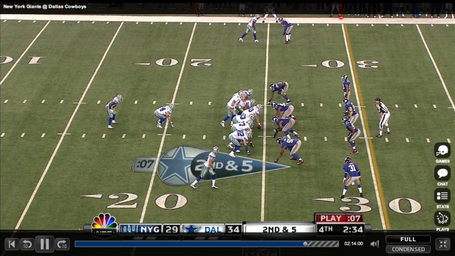 Austin would again go in pre-snap motion, ending up outside LT Doug Free. 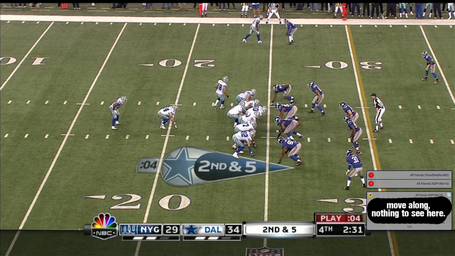 The play call was for Fiammetta to contain Jason Pierre-Paul enough to spring Felix to the outside. I'm pretty sure the train of thought was the old adage that you run right at the elite pass rusher, something that team's used to try to do to DeMarcus Ware. It didn't work. 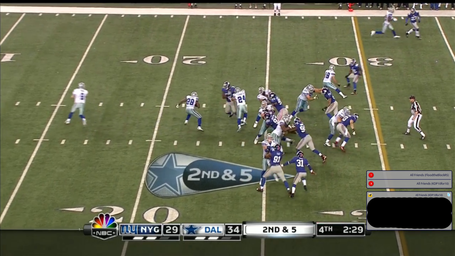 JPP discarded FB Tony Fiammetta and was able to stuff Felix before he got to the outside. It appears that there was a crease to the inside of the block, but JPP just made a man's play. With Dez taking the CB down the field and Miles taking on the safety, the left side would have been wide open if Fiammetta was just able to get a slightly better block on the emerging defensive stud. Instead, a gain of zero. Successful playcall thwarted by a great player and a below average block. 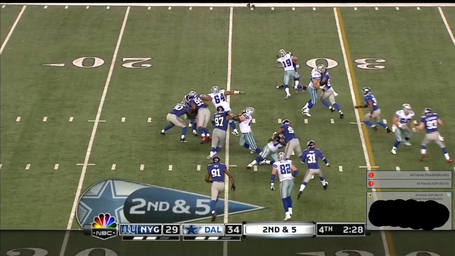 One of the five plays that will live in infamy should the Cowboys fail to qualify for the postseason. Third and five, the Cowboys line up with three-wide following the Giants burning their second timeout to keep the clock from dwindling down to the two-minute warning. 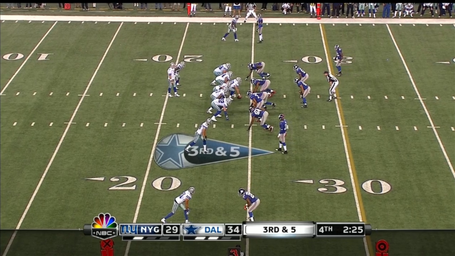 Romo's hard count forced the Giants to reveal their blitz, bringing all eight into the box. Seven come at the snap with a in-the-box safety covering Witten on a crossing route. 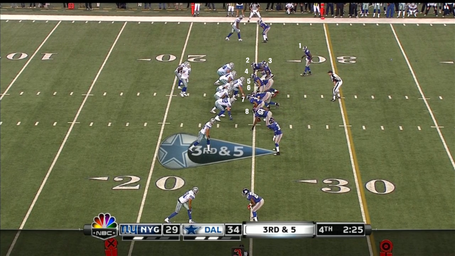 Cornerback Aaron Ross tries (pathetically) to get a jam on Miles Austin in the slot who blows right past him into the wild green yonder. Unfortunately, as we all know, Romo and Miles aren't able to connect on the pass. 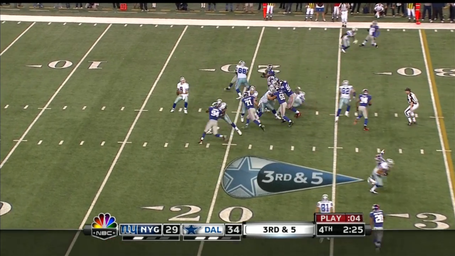 In most situations, 99 out of 100, the Cowboys make this completion and a different history is written. It just wasn't meant to be. 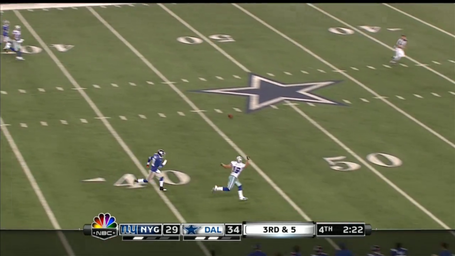 If Dallas successfully converts the run on second down, a running play would follow, leading to NY spending their final timeout. Another running play would lead to the two-minute warning and a third down run would have the Giants getting the ball back with a minute left on the clock. Instead, after the missed third down pass attempt, the Giants got the ball back with a timeout and the two-minute break, leaving Eli enough time to abuse the Cowboys secondary.

Now don't get me wrong, there have been mistakes this season made by rookie head coach Jason Garrett. That's not debatable. I just hope that whenever the offseason gets here, whether it be this coming Monday morning or any of the subsequent ones, people remember how many times Jason Garrett called the perfect play sequences like he did in this game.

I for one, can't wait to see how he fares in the future, including Sunday night with everything on the line.