What Big Blue View Is Saying About The Dallas Cowboys

Share All sharing options for: What Big Blue View Is Saying About The Dallas Cowboys

It's week 17. The Dallas Cowboys are off to New Jersey to face the New York Giants to decide the NFC East crown, and love is in the air. It's time for the weekly visit to the opponent's SBN franchise. For the cute and cuddly Giants, that is Big Blue View.

No need for a lot of build up here. Let's just jump right in with their review of the Tom Coughin press conference after the Giants' win over the Jets.

No one had to remind New york Giants head coach Tom Coughlin about the importance of Sunday's regular season finale against the Cowboys. TC is doing everything in his power to make sure his G-men understand what is at stake, and if his team comes out flat, it won't be for lack of preparation.

I have to admit, there is a part of me that likes the idea of our classic rivalry meaning something again. And this one question will let you know that the Giants are feeling that they are not getting treated well by those guys in black and white.

Q: Did you get an explanation on any of the calls that didn't go your way?

There is also one comment in the thread for this article that I had to pull up.

I am banned from Bleeding green Envy and Gangrene Notion

The damn guys at Blogging the Girls are just always nice to me. I dunno what gives.

It's cause we are a class act, S-M, despite the "girls" dig.

Nah, not going there.

More after the jump.

Sometimes during my weekly foray into enemy territory, I like to find things to argue with. But other times, like in the article on Trying To Predict The Unpredictable, I find myself pretty much in agreement.

How can anyone be comfortable making a prediction about the outcome of this one? Let's face it, these two teams have pretty much defined "unpredictable" this season. On top of which, the reality is that neither one is Super Bowl-caliber. There is a reason why this will be the first time since the 1970 merger that the NFC East champion will have fewer than 10 victories.

I may not like it, but you have to admit the point is valid. And even the scenarios outlined at the end of the article are pretty much the ones I think we all have considered.

There's not enough to block quote in this piece, but the fact that Hakeem Nicks (or, as someone once called him, Nakeem Hicks) has a hamstring problem is certainly of interest.

Likewise, this picture from BBV says all that needs to be said about this. 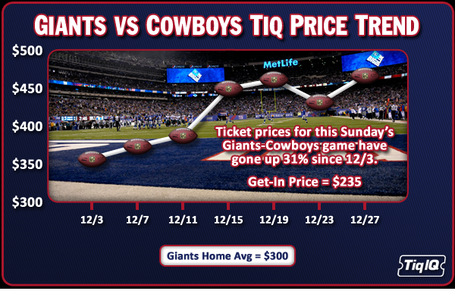 Now, the Scouting Report they have on the game is something I think might need some holes poked in it, even if it is basically a mirror image of a post I did looking at some of the same numbers. What I didn't exactly agree with was the slant on the meaning of the numbers at the end.

Here we are at the end of the season and Dallas is on the move, downwards. As we have discovered, they have slipped in all facets of their game, except one - the offensive line. That is quite ironic given the hand injury that Romo is dealing with now. The Giants, on the other hand, have improved in most every aspect of their game while keeping a firm grip on the slots where they have been dominating the league.

I realize that mostly it is a matter of what team you are a fan of, but still, I question the whole idea of an 8-7 team "dominating" much of anything.

He's dangerous because he extends the play. You can't allow him to do that. When he does extend it, as he did a couple of times on us in Dallas, he makes big plays. He's probably not running as much as he once did, but he is running enough to get the ball down the field. He sees things very well. You just have to do something about trying to force him to step up in there rather than get to the outside. He can get to the outside to his left as well as to his right.

Like Terry, I am a sucker for compliments about Tony.

Meanwhile, in the This Could Be Trouble category, an article speculates about whether the Giant's DC Perry Fewell is trying to come up with a "Perfect Storm" since Osi Umenyiora is looking to get back on the field after missing several games.

"We'll formulate a plan. If we can get them all on the field, we'd love to have them on the field."

"Them" refers to Jason Pierre-Paul, Osi Umenyiora and Justin Tuck. It would seem that Fewell has his sights set a little higher than which defensive end gets the starting job on Sunday or who gets more snaps for that matter. Instead, it looks as if Fewell is designing some new schemes and blitz packages in which these "Three Horseman" converge upon Tony Romo like a perfect storm.

A lot of people have remarked here at BTB and elsewhere about how similar the Cowboys and the Giants are this season. The article at BBV about whether Tom Coughlin is coaching for his job this Sunday points out one of the similarities, since there were some rumors earlier this season about Jason Garrett being on a bit of a hot seat. Just like we concluded about JG5000, the Coughlin rumors seem a bit premature. One of the best arguments (again, one Dallas fans will find somewhat familiar) is this.

The Giants have really been little more than a four-man team much of the season. Eli Manning, Victor Cruz, Jason Pierre-Paul and Hakeem Nicks have carried a roster riddled with inexperience in many spots. The Giants, it seems, have been in makeshift mode all season, changing their lineup from week-to-week and constantly trying to fit in new pieces.

I took a look over at the FanPosts section, and something caught my eye. There were two posts, one called Why Reese mjust go, part 1, and the other titled Examining the Culpability of Jerry Reese. Now, if you don't know who Jerry Reese is, he is the NYG GM. I won't go into the pros and cons that the posts talk about, I just wanted to point out that the often mentioned idea of Jerry Jones hiring a separate GM is no guarantee you would be any happier with things.

Well, that's it for this installment. Hopefully, I'll be back next week with a visit to Pride Of Detroit or maybe The Falcoholic. So, with an eye towards that goal . . .