News And Notes About The Dallas Cowboys' Game @ Arizona Cardinals

Share All sharing options for: News And Notes About The Dallas Cowboys' Game @ Arizona Cardinals

Gameday has arrived! The Dallas Cowboys hope to keep their winning streak alive against the Arizona Cardinals in Glendale, while those Angry Birds (sorry, sorry) try to upset their hopes and keep their own slim playoff hopes alive.

And that means it's time for my weekly look at the news o' the day about the teams and other random things you might find of interest.

Weather is not a factor since they have a dome to play under, but for the many Cowboys fans that will show up, it is a surprisingly cool day out in the desert for tailgating. The high is only expected to be 60 under partly sunny skies, so for all you supporting the Star at the game, have a fun time!

Before I get to the current teams, there are a couple of former Cowboys who have made the news, and not in a good way. First, recent Ring of Honor inductee Charles Haley has put a bit of a stain on his name with some illegal use of the hands.

Former NFL great Charles Haley was issued a citation after being accused of slapping a woman on the buttocks during the Dallas Cowboys' game against the Miami Dolphins on Thanksgiving.

He's denying it (duh). Maybe he just doesn't understand why she was offended.

Meanwhile, Igor Olshansky has something a bit more serious on his hands.

So that's why the Bear was dancing!

More from the police blotter as well as game type stuff after the jump.

Just as a counterpoint, it is nice to know that at least one other team has some negative things going on with the authorities, and this is not a former player for the Detroit Lions, either.

Ndamukong Suh crashed his car into a tree in downtown Portland, but was not injured.

Police say Suh was not impaired and was cooperative with officers following the accident at about 1:15 a.m. Saturday. Suh lost control of the 1970 Chevrolet Coupe he was driving, which then hit a curb, light pole, drinking fountain and tree.

Somebody needs to go over the excessive hitting thing with him again.

While that is a little laughable, the issues that Oakland Raiders linebacker Rolando McClain is having are no laughing matter at all.

Oakland Raiders linebacker Rolando McClain was charged with third-degree assault and three other misdemeanors today after a Wednesday night altercation in which a man begged the football star not to shoot him, Decatur police said.

Can we hear it one more time for having the Right Kind of Guys on the Cowboys?

Speculation continues to swirl about Rob Ryan's future as the coaching carousel gets ready to spin after the season. It is nice to know he is more concerned about other things.

"That's the only thing we're here to do is to try to win championships. That's what we're going to do," the defensive coordinator said Friday.

"About the speculation, I mean, shoot, I've speculated my whole life. It's no big deal. Those opportunities come when you work hard and take care of the job you have. That's what I am trying to do."

John Lynch will be working the booth for the game, and he had some observations about the Cowboys, including the Big Robowski's defense.

The first time I studied his defense, it was hard to figure out. There are so many moving parts. He offers a great mix of innovation and good old-fashioned fundamentals.

Sticking with the defensive theme, here's a look at how Gerald Sensabaugh and Abram Elam have impacted the team. Pretty well, I'd say.

A year after giving up the most points and most yards in team history, the Cowboys rank 12th in yards allowed and 15th in points allowed. Sensabaugh is second in total tackles behind linebacker Sean Lee, with 60. He also has two interceptions, two forced fumbles and two fumble recoveries. Elam is fourth in tackles with 50 and has one forced fumble and one recovery.

The Cardinals defense is planning for the challenge Dallas and its offensive weapons pose. But I do like what their DC Ray Horton had to say.

Horton said Dallas will be in the NFC Championship Game. For a defense that wants to be a challenged, here it is Sunday.

What a perceptive man.

Of course, the big thing for our Cowboys is to keep the streak alive. This lengthy game summary has lots of info, some of which is well known. But some things just are fun to repeat. (Gee, maybe I should read my own stuff.)

The surge has given the Cowboys a one-game edge on the slumping New York Giants for first place heading into the season's stretch run.

If you like the illustrated version of a game preview, here is a nifty look with lots of pretty pictures. Like this. 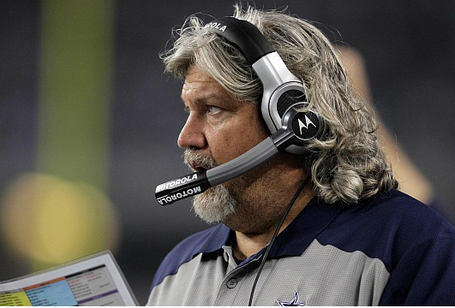 OK, maybe pretty is stretching it a tad.

ESPN offers its keys to the game. They also have an interview with dangerous receiver Larry Fitzgerald.

The Dallas Morning News has its look at how the teams matchup. They also take a closer look at the matchup between LT Doug Free and talented rookie ROLB Sam Acho. And they have a piece on the return of Mike Jenkins.

The San Antonio Express has its gameday barrage of articles. There is their scouting report, a five things to watch, and a report on how the Cowboys are ready to go grab "this thing".

The Arizona version of the mothership gives its view of things.

The Revenge of the Birds got their five key matchups up too late for my article yesterday on what they were saying, so I thought I would include it here, since they were a pretty cool bunch of guys.

While I am on the topic of fan takes on things, I thought this is a decent treatment of the Cowboys now having Stephen McGee as the number two quarterback.

Just because I sometimes take odd pleasure out of things like sticking a sharp object in my eye, I thought I would throw in this bit about the Top Ten quarterbacks drafted in 2007. (The number is when he was selected overall.)

No. 103. Isaiah Stanback, Cowboys: What can we say about Isaiah Stanback? Namely, he has five pass receptions in his pro career. He tore his Achilles in the preseason with Seattle, and he was released soon after. It's almost not fair to call him a QB, but that's what he did in college, so that's how we'll list him.

Now, to take that bad taste out of your mouth, here is a look at how the whole "Tony Romo is no good in December" thing is just a mistaken perception.

Then again, have you ever heard of a hot streak?

That's Romo at the moment. Yes, a hot ride in December, including January.

I think all of you (especially Terry) will enjoy that.

That's what I found. So here's hoping for a good game. And, oh, before I forget: