Tracking The Five Sacks Of Cowboys Tony Romo: Who's At Fault?

Share All sharing options for: Tracking The Five Sacks Of Cowboys Tony Romo: Who's At Fault?

You've heard of the five-second rule, right? If it drops on the floor, you have five seconds to retrieve the food before "the dirt sets in"? It's a time-honored edict of childhood. Well, football might have it's own version, the three-second rule. If the quarterback hits the turf in under three seconds, the dirty culprit is his offensive line.

Tony Romo was under siege on several occasions Sunday. He was sacked five times, and pressured relentlessly by the Cardinals pass rush throughout the game. PFF has yet to release their game grades, but I'm sure the Quarterback Disruption numbers will be in the 20+ range. [UPDATE] Grades are out. 5 sacks, 2 hits, 15 QB pressures, 22 total Disruptions.[/UPDATE] The five takedowns mark the most times Romo has eaten dirt this season, as well as the high mark for the Arizona defense. As Rabble pointed out earlier in the week, the sacks were drive killers for Dallas. We'll look at the details of them after the jump.

There's no question that the penetration caused many of the problems the Cowboys faced in the desert. The question is, were the linemen the only ones at fault?

Many times, the blame for a quarterback being knocked off his feet, is placed at the feet of the men hired to protect him. That's not always the case. There's a fairly (overly?) simplistic way of measuring fault for sacks. If the pressure gets to the quarterback in under three seconds, it's reasonably safe to say that the fault is that of the protection. Three seconds generally seems to be long enough for a quarterback to scan the field and identify if the deep routes are available.

The Cowboys run a modified version of Air Coryell, where the progression for the quarterback looks at the deep routes first, and then comes ‘down' to the shorter, safer routes if the long ones aren't available. This might slightly alter whether three seconds is a good threshold to measure this sort of system, however I'd wager it's safe to say Romo should know at this point whether or not the receiver's route will open a window to fit the ball into.

You'd be able to see if the wide-out has the requisite step (and already have a sense of whether the corner has the ability to make up the ground) and the safety has to have committed by this point, letting the QB know single or double coverage.

Now, where the pressure comes from also plays a role in the timing factor, as well as where the checkdown routes are designed. If the heat comes directly at the QB, it takes away much more of the read options then if it's coming from the front or the blind side. Unfortunately for the Cowboys, this is where plenty of pressure has been coming from this season.

Tony Romo has been dropped 25 times in 12 games this season, 12th most in the league for 2011. Of course, the offensive line takes a lot of the blame for this total. It's no secret that what we've come to describe as "Romo Magic" has played a major part in keeping this number under 40.

The fourth quarter touchdown drive engineered by Romo against Miami on Thanksgiving Day was the perfect illustration of this, as he escaped certain doom several times to turn doom into glory like he drank a secret elixir on the sidelines.

Here's a look at the details of the five sacks from Sunday, and which side of the line the "blame" can be placed based on the three second rule.

Sack #1: After a scintillating Felix Jones kick return to the Arizona 35, a sack on first down put Dallas in 2nd and 17. A run and a short pass later, Mat McBriar was on the field (we can save the convo about going for it even on fourth and 10 from this close for another time).

Even with Paris Lenon showing blitz pre-snap, Kyle Kosier decides to kick out and block DE Darnell Dockett, allowing the free rush. Arizona was bringing the house, but the domino effect is readily apparent. The safety is coming crashing in to follow the LBs. The pressure is on Romo in less than one second and the play has no hope. 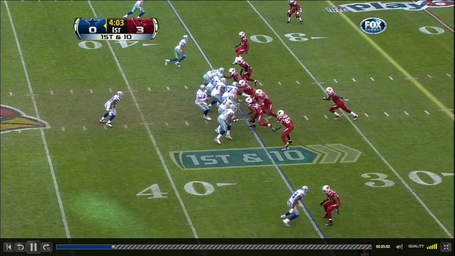 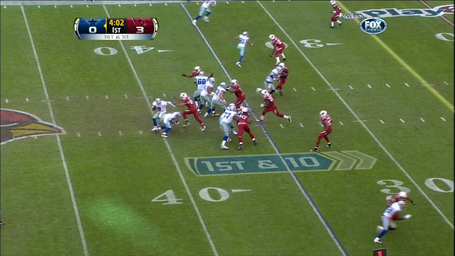 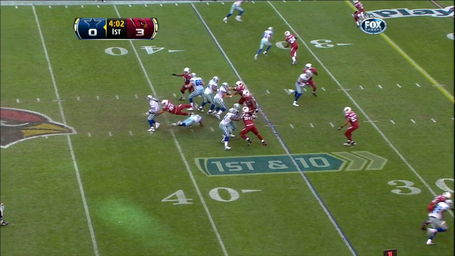 Verdict: Under 3 seconds. Blame To The Protection

Sack #2: On a 3rd down from within Cardinals territory, Dallas lost 11 yards and was pushed back to their side of midfield, leading to another punt. This play was after a damaging 4 yard tackle for loss on a run play to set up a 3rd and long.

In the pics below, the pocket is pristine clean after two seconds. The pressure starts to come as the clock strikes three, but the sack doesn't happen until 4.5 seconds have elapsed. (trust me, the clock was about to change to 11:09 at the snap). Romo doesn't budge when Dockett comes free, remaining in the pocket trying to complete something downfield. With no underneath routes, his only option would be sliding out the pocket and throwing the ball away, which would have saved 11 yards of field position, but would have still been a punting situation. If you credit Romo for knowing the game situation here, maybe taking the sack was the safe thing to do, but you'd have to ignore that he was winding up as he was taken down. 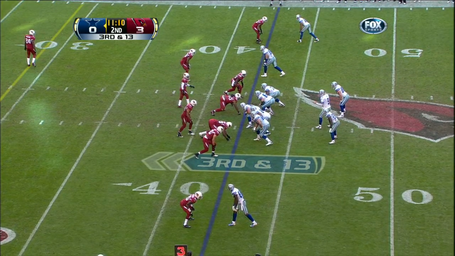 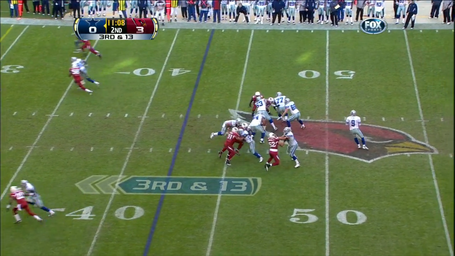 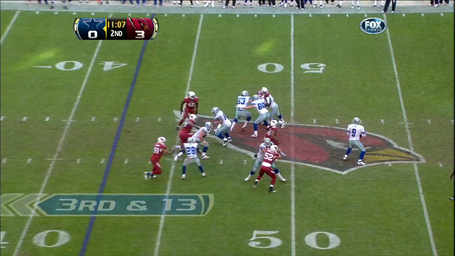 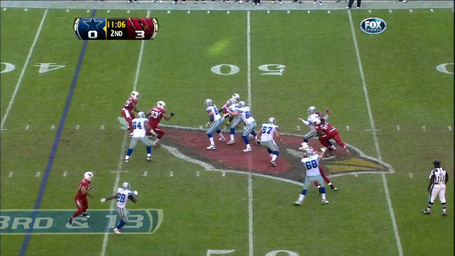 The Cowboys got the ball back at their 20 with just under two minutes remaining. They attempted a deep pass to Ogletree on their first play, then appeared to play it safe with two runs and short pass to the running back (first read). That brought the clock down to 36 seconds. They tried another pass to Dez Bryant that would have needed a sprint to the line and downing the ball in order to get another play off.

As you see in the 2nd pic below, RG Kyle Kosier has obviously lost his battle as he's on the ground within two seconds. It appears that Romo can dump the ball off to Felix Jones, who looks like he is peeking back at Tony, with his back to the line play. Jones is headed upfield in screenshot three as Romo gets swarmed... at exactly the three second mark. A dump off to Felix and a run out of bounds would have meant at least 17 seconds left on the clock. 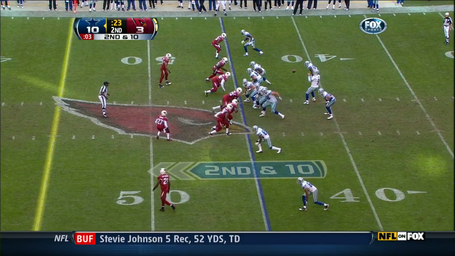 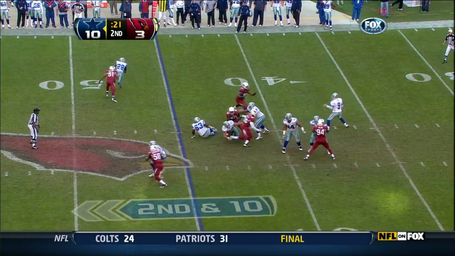 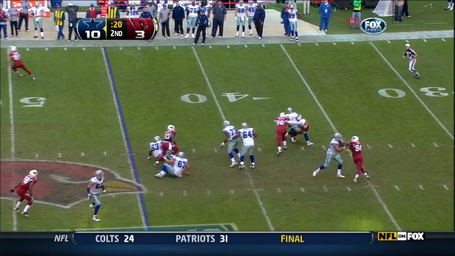 Sack #4: Again on first down, on a drive where Dallas had moved from their own 16 down to Arizona's 17. The momentum was lost, Dallas wouldn't regain the red zone and settled for a short field goal.

I'm not sure what the protection plan was here. The Cowboys sent both tight ends (left) out in routes, even though they were covered up by linebackers that would eventually blitz. Doug Free kicks out to take on the inside guy. The Cardinals showed blitz up the middle pre-snap, and came with 7 on hike. The Cowboys sent four receivers on routes, blocking with 6. Four of those six blockers (including DeMarco Murray) were beaten by blitzers. The pressure got to Romo in less than two seconds. The Cowboys would spend their first time out after the play, when Romo wasn't able to line up the players in a way to relieve his protection concerns. Think they could have used this later in the game? 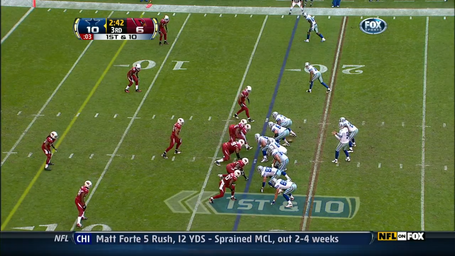 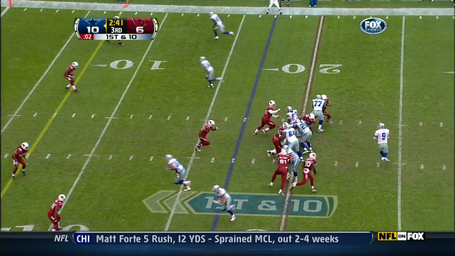 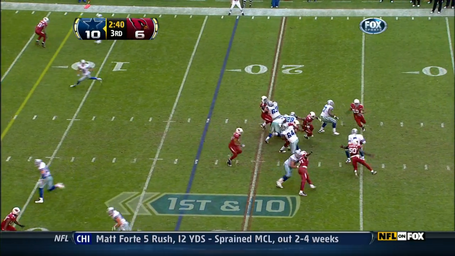 Verdict: Blame To The Protection Mostly, And Romo For Not Checking Out Of Play

Sack #5: Early in the fourth quarter, again on third down and exactly at midfield, another decent opportunity for points went down the drain. The Cardinals are only rushing three. Romo has several opportunities to process the pressure, and for the first time in a while, seems skiddish in the pocket. He breaks out in happy feet, jumping around in the pocket before eventually being taken down.

This is the textbook definition of a coverage sack... except for the fact that it appears Tony looks right at Felix Jones who had snuck out to the left sideline past the first down marker. 4.5 seconds before the pressure was on him. You can't tell in the pics, but the reason he may not have thrown it is because he tucked the ball while shuffling his feet and wasn't in a position to pass.

Look at the second, third and fourth screen caps, with a clean pocket, I'd assume a QB should be able to step into the throw and fire a pass into the zone to Dez Bryant as well. 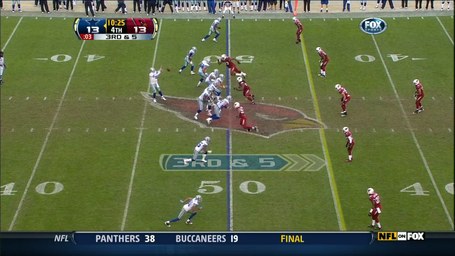 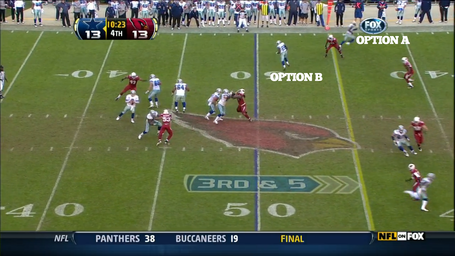 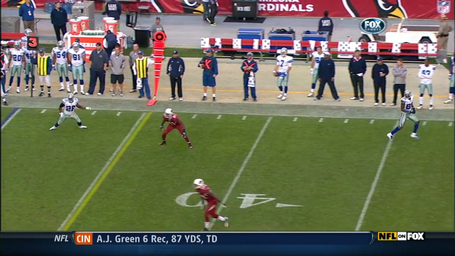 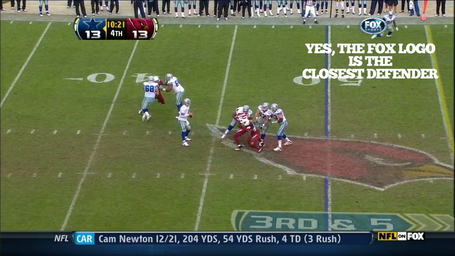 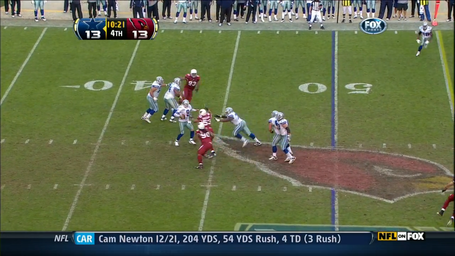 Of the five sacks, Romo was directly to blame for two of them, and shared in the blame in another. Sack #3 should have been "kill, kill kill!". Now, this doesn't take into account the offensive line failures when Romo escapes the pressure that other quarterbacks can't, and make either neutral or positive plays. An article outlining that would reach 3,000 words instead of 1,500. It does however shed some light that not all sacks are the fault of the O-line, even on the worst day sack-wise of the 2011 season.

We don't have to look at another 3-4 defense this season; without a doubt the Achilles heel of the Garrett offense. A much different animal is on the way to Cowboys Stadium in the form of the Giants and their rotating front four.