It's a pivotal game in the NFC East. The New York Giants come to Cowboys Stadium to play Dallas in a game with the lead for the division on the line. Both teams are trying to rebound from heartbreaking losses in games they came close to winning.

That uses up the cliche quota for the moment. You all know what kind of impact this game will have on the season.

The Giants have been a real problem for Dallas since they opened the Palace, having beaten the Cowboys in the first two meetings there. Both teams are trying to figure out just how good they are. Dallas had a four game winning streak, but was squeaking through close games, and then lost the last game against the Arizona Cardinals in a fashion I will not rehash here, due to being completely out of anti-nausea medication. The Giants are on a four game losing streak, but they played the undefeated Green Bay Packers down to the wire.

I went back and took a look at that last game to get something of a feel for what the Cowboys are going up against. I have some general observations about what the New Yorkers who play in New Jersey (wait, that's the Jets too - oh, who cares?) bring to the game. And just for fun, I looked in detail at a successful play from the offense and the defense, 'cause I know how much most people like the spiffy pictures.


Take the jump to see what I got.

Lets start with the quarterback. Eli Manning is having a very good year. In one of the serendipitous things that I love here at BTB, OCC has just done a post comparing the NFC East passers, and he shows how close the year to date performances by Eli and Tony Romo have been.

(Gratuitous music reference here. I just like the song.)

In the game against Green Bay, Eli was slinging it quite well. He put up 347 yards and 3 touchdowns, with one pick six to the negative. As a matter of fact, that pick six might have been the difference in the game.

One way in which Eli was different from Tony is that he relied very heavily on two receivers. Hakeem Nicks and Victor Cruz caught 61% of all the completions in the game, with seven each, and accounted for 60% of the yardage. Cruz led in yardage whereas Hicks had two touchdowns. Just from looking at this game, it appears that if you can shut these two down, you might be able to limit the overall attack. But that is not always an easy task, since both are very good at getting open. Hicks in particular showed some Dez Bryant style ability to go up and get the ball against the defender. Outside of them, the only receiver who Eli seemed to look to with any frequency was TE Jake Ballard, who had 3 catches. There was also one long touchdown catch of 67 yards by reserve TE Travis Beckum, but it was only his second catch of the season. It came less than three minutes into the game, and he then disappeared again.

The running game was effective, but not used as much as it might have been as the game became a shootout between Eli and Aaron Rodgers (who had 369 yards passing). There were only a total of 20 carries by the G-men, but they got exactly five yards a pop. Brandon Jacobs was the more efficient back, putting up a very good 7.4 yards a carry, but he only got 8 carries. Ahmad Bradshaw had 11 totes for a 3.5 average. The run game is something that Dallas may need to watch defensively. Green Bay has a porous defense, but that is mainly against the pass, where they rank 31st. On the ground, they are a little above average at 13th, so the Giants will be a threat to make some yards here.

The offensive line did a pretty good job protecting Eli and also in opening up a few good holes for the backs. Eli was only sacked once and hit three times. However, one of the hits was a big one, where Clay Matthews (I think) came looping around behind Eli from his left side and hit his arm just before it came forward, causing a fumble that looked at first like an incomplete pass. If you happened to see the Texans game, there was a very similar play there, but the replay of the Eli fumble was much more conclusive in that you could see the ball come loose and then get knocked forward as Eli's hand was pushed by the defender. Green Bay recovered, but then the Giants defense held and the Pack missed a field goal.

Defensively, the Giants were stout against the run and a bit feeble against the pass, not a good combination when you face the Packers. Green Bay doesn't do much running anyway, and Aaron Rodgers has made several defenses look like have as many holes as those silly hats the Packers fans wear. In the secondary, Prince Amukamara looks like someone that can be beaten. He has only played in three games after coming back from a broken foot suffered in preseason, and he looks like it.

The pass rush was a more effective part of the game, and reflects the fact that the front four on their 4-3 defense is the strength of the team. Chris Canty and Justin Tuck both had very good games and were in the backfield a lot. Jason Pierre-Paul looked very impressive as well. In the linebacking corps, Chase Blackburn stood out with the one interception they had. This was an interesting play to me because Rodgers clearly just did not see Blackburn and threw a ball he should not have. It was, dare I say it, early season Romoesque. But of course he's Aaron Rodgers, so I suppose it was all right. (And they did win the game.)

As I mentioned, they did very well against the run, holding Green Bay to 89 total yards and 3.2 YPC. This is one of those situations where you don't know if it was more Green Bay having an anemic running game or the Giants having a solid run defense. I lean towards the former, based on the season statistics which have the Giants at 23rd in the league.

There was one area that they did prove vulnerable, and it was something that the Cowboys might want to exploit. On back to back passing plays (with a run in between) where Rodgers dropped back to pass, the secondary had the receivers covered, but the Giants left a big gap in their left side. Rodgers found a hole on that side (his right) and made two good runs, both for first downs (one on 3rd and 10, the other on 2nd and 9). The first looked strictly like he was escaping the pass rush, but the second might have been a designed play. Since the Cowboys have a tolerably mobile quarterback, this may be something the coaches might be mulling over.

There was nothing special that I saw on the special teams. They did get an average of 25 yards per kickoff return, but I think that was partly due to the Green Bay kickoffs being rather shallow. They gave up almost exactly the same in coverage, and neither team did anything returning punts.

Now, some plays. First, a nice pass play that shows good design by the Giants. The situation was a 2nd and 8 in the 3rd quarter following an illegal formation penalty. Here is the formation. 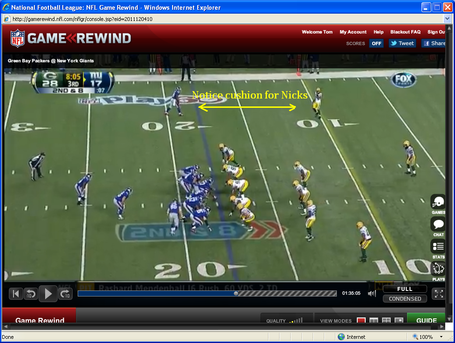 You can see Hakeem Nicks lined up split out to the left, and the defensive back is giving him a big cushion - all the way to the first down marker. You also notice the tight end going in motion from right to left at the bottom of the screen. 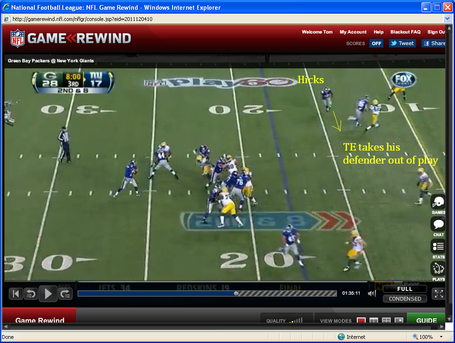 As the play develops, you can see how the tight end has taken a defender with him. Nicks is crossing underneath him, and his defender is pretty much out of the play. Hicks has a lot of room to work. Eli is getting rushed with one man breaking through, but he will stand in and get the ball off. 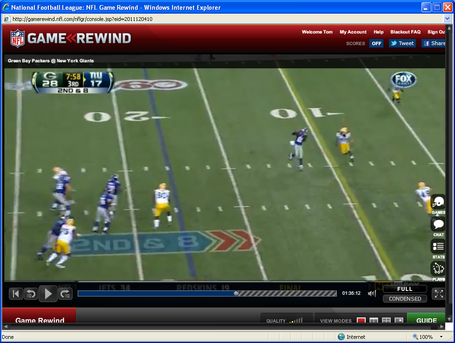 And here is the payoff. Hicks has just caught the ball. The defender closing is the one that started to go with the tight end, and he is too late to stop the play. Hicks will be able to push him just over the first down line, and two plays later Hicks will catch a touchdown pass. Nice execution all around by the Giants.

The next play actually comes from earlier in the game. It shows the first sack by the Giants. They have the Packers in 3rd and 12 in the second quarter. Rodgers is in a shotgun. 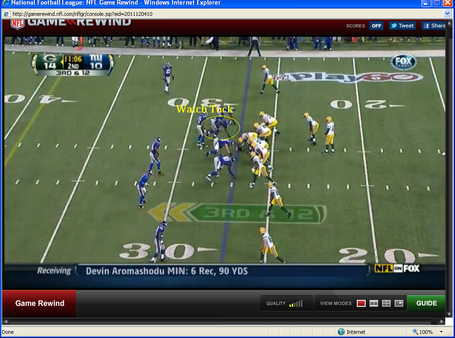 I've circled Justin Tuck, who is lined up in a tackle slot instead of the end position. You also notice a linebacker coming up and showing blitz just inside of Tuck. He is going to come on a delayed rush. 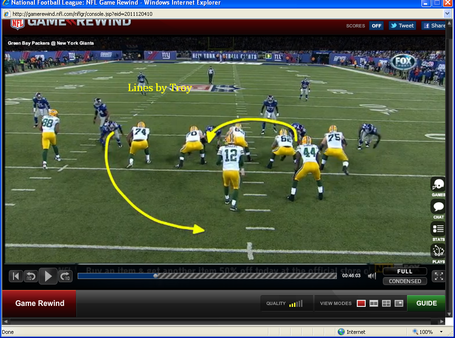 Here is Troy Aikman's diagram of what is about to happen. 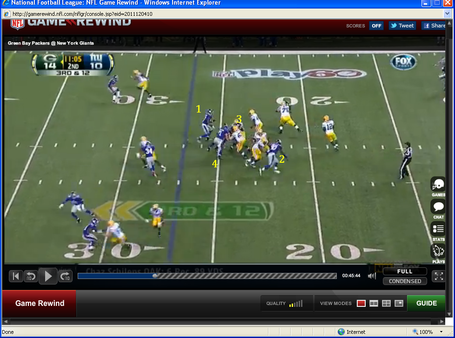 I've labeled the key players here. 1 is the linebacker coming on a delayed blitz. 2 is Jason Pierre-Paul, who is going to be pushed outside, but who will force Rodgers to step up and start to his left. 3 is Tuck, and 4 is Rocky Bernard, who will tie up the blockers and allow Tuck to come back to his right. 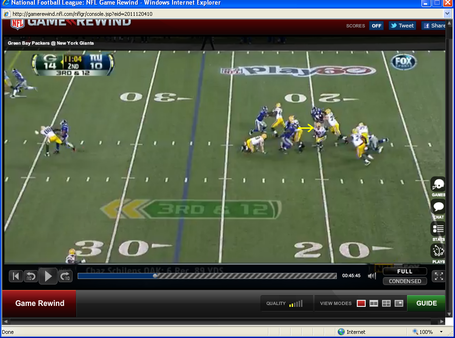 Here you see that Rodgers is trying to make a break for all that green space where the down and distance graphic is. If he gets clear, he has room to run, or he can throw to the receiver just under the 3. But Tuck has gotten free of the blockers and is closing fast. 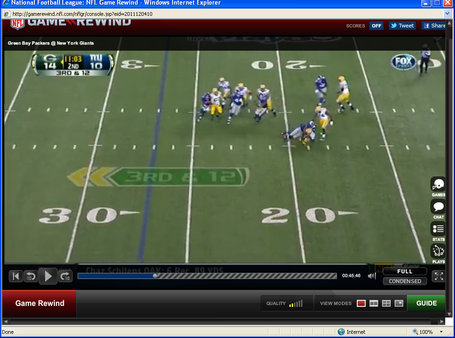 Nothing much to say here.

I don't know what to predict for this game, but then I usually don't have a good idea of what will happen. The Cowboys need to have all the parts working for this one. I am very curious to see the attitude that they bring to the field Sunday night.

I hope it is a really nasty one.