Dallas Cowboys: Mr. Six Blings Is In The House

Share All sharing options for: Dallas Cowboys: Mr. Six Blings Is In The House 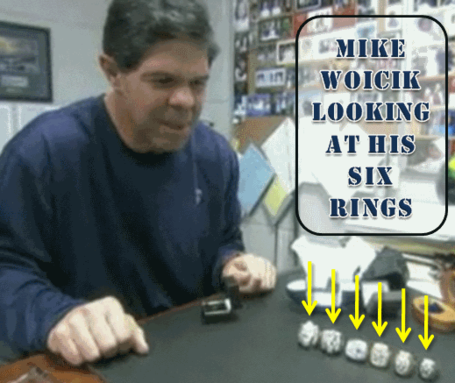 It's not often that a strength and conditioning coach is welcomed with such fanfare to an NFL team, at least that's what we did here at BTB with Mike Woicik.

First we posted that Mike Woicik was was being interviewed. Shortly after that we breathlessly informed you he was going to be hired. And because three's a charm, we then wrote that he had actually been hired.

You've read the articles, now we present the film!

Rainer Sabin from the DMN unearthed an NFL Films video about Mike Woicik which is just too good not to watch.

Follow this link to watch the NFL Films portrait of Mr. Six Blings. See Michael Irvin and Troy Aikman as well as some Patriot dudes talk about Mike Woicik.

A word of warning though: put down your can of beer or other beverage of choice before reaching the 4:20 mark of the video, and do try to maintain a straight face when Troy Aikman says the following, easily misconstrued, sentence:

"Mike...had a big part in why we enjoyed playing with each other."

After all, we're not Beavis and Butthead here.