NFL Lockout 2011: The Haves And Have-Nots Of The NFL

Share All sharing options for: NFL Lockout 2011: The Haves And Have-Nots Of The NFL 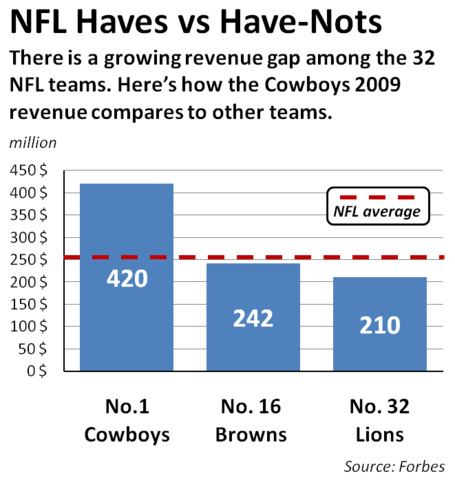 In the previous post of this series in which we look at what's behind a potential lockout, we looked at how the growth of unshared revenue was threatening the NFL's revenue sharing system and with it the future financial parity and competitive balance of the league.

Today we take a closer look at the size of the revenue gap between the teams and look at who the Haves and Have-Nots in the league are.

Forbes magazine estimates that there is a revenue gap exceeding $200 million between the NFL's top and bottom earners (see graph on the right). Teams like the Cowboys ($420 million), Redskins ($353 million) and Patriots ($318 million) are no match for some of the league's low revenue teams like the Raiders ($217 million), Jaguars ($220 million) or Vikings ($221 million), despite the NFL’s revenue-sharing system.

There is a growing disparity between the high-revenue teams and low-revenue teams, with a direct impact on the bottom line of the bottom dwellers, especially when you introduce the salary cap into the mix.

The Salary Cap and Salary Floor

The 2009 salary cap was set at $128 million, the salary floor was set at $108 million. Let's take a look at the teams with the highest and lowest revenues in 2009, the Cowboys and Lions who had revenues of  $420 million and $210 million respectively. For the Cowboys, the player expenses would be a minimum of 26% of total revenues and a maximum of 30%. For the Lions, the percentages are twice as high, they would have to pay at least 52% of their revenues in salaries and could go as high as 60%.

For the Cowboys, player salaries are really not that big a deal. Of course, every cent you save there increases your profits, but the Cowboys are certainly not hurting because of the player salaries. In fact, Forbes estimates that the Cowboys took in a cool $143.3 million operating income in 2009. In other words, the Cowboys made a bigger profit that the entire amount of money they spent on the salary cap-relevant player salaries in 2009. Unsurprisingly, the Lions appear to have incurred a loss in 2009. Here's how all the teams in the league fared:

As we saw in the previous post, the current revenue sharing model puts the small-market teams at a systemic disadvantage because all the sponsor and luxury box money generated by the big-market teams isn't shared. But it still causes the salary cap, and more importantly, the salary floor, to increase.

There is a very real danger that as a result, operating costs for low-revenue teams, like in the Lions example above, will eventually surpass their revenue streams. This is issue at the core of the current labor situation. In the last CBA, the owners agreed to a deal that didn't include enough revenue-sharing to make specifically the small market teams viable in the long run.

At the time, Buffalo Bills owner Ralph Wilson warned the league about the dangers inherent in the 2006 deal:

"The non-shared revenue is growing and it's got to be addressed, otherwise markets like Buffalo won't be able to compete."

The league didn't listen. Wilson and the Bengals owner, Mike Brown, were the only two dissenting votes when the league ratified the new CBA in a 30-2 landslide.

Today, ownership is pulling in two mutually exclusive directions at once. The Have-Nots want a revenue sharing agreement that guarantees financial viability and on-the-field competitiveness for small market teams while the Haves think the "Bottom-feeders", "pick-pockets", "freeloaders" and "commie bastards" should start carrying their own weight and find ways to increase their own revenue streams. You know, like, build a stadium or something. Or move to LA. Or something.

This fundamental disagreement among the ownership is threatening the very foundations the league was built on. It is an open secret that small-market owners want a bigger piece of the NFL pie, while the large-market teams are tired of handing out what they consider welfare checks. The league has done a good job in keeping public scrutiny off of this substantial and growing rift between the high and low revenue teams. But the NFL will have to address this, and address it soon.