Vote For (Or Against) DeMarcus Ware For Madden's Next Cover

Share All sharing options for: Vote For (Or Against) DeMarcus Ware For Madden's Next Cover

EA Sports and the Madden franchise are bringing  a new twist to the most popular video game franchise in history. This year, they are asking us fans to decide who will grace the cover of the next installment of the series, Madden NFL 12. DeMarcus Ware, all-world linebacker, is the representative for our Dallas Cowboys. It's a 32-man tournament with Ware being slotted 14th in the right bracket. 14th !?! That's crazy talk for DeMarcus to be 14th in anything, even video games. Josh Freeman ranked better than Ware?

Click here to vote for the Madden 12 cover athlete.

For those who aren't familiar with the game, Madden is released in the year prior to the number in the title, so Madden '12 will be released some time in August. Is Madden lockout proof? Their deal is with the league and the NFLPA. I guess we'll see uniform numbers instead of names, like for the NCAA game franchises.

As most video game and NFL buffs know, being the cover athlete for Madden has become the new Sports Illustrated cover jinx. Fans might think long and hard about voting FOR DeMarcus to win something, just this once. Eddie George, Daunte Culpepper, Marshall Faulk, Mike Vick, Donovan McNabb, Shaun Alexander, Brett Favre and Troy Polamalu all suffered disappointing seasons following being on the cover. Some were injuries, some never achieved the success they had recently. There are a few people that made it through unscathed like Vince Young and Larry Fitzgerald, though you have to wonder if being in Arizona without Kurt Warner is the biggest curse of all. Vince Young famously prayed about it and didn't see a decline in his performance that year, but his career is on an unknown trajectory.

Maybe it's a better move to vote for Ware's first round competitor, Michael Vick.

Hat tip to bryangene for the Fanshot.

Interesting side note- I went past my mother's house a few weeks back, and stumbled across some toys from my childhood including Madden '93 for the Sega Genesis. When I showed it to our 11-year old, he wasn't in awe at the clunkiness of the cartridge, but the fact that Madden 11 wasn't the 11th version of the game, but actually the 21st. It's fun to be reminded of a child's perspective every now and then. 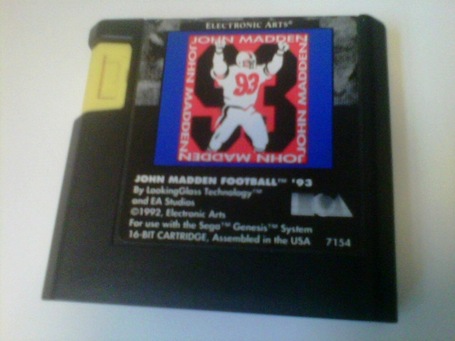