If you haven't already done so, please take a quick look at the Grading the numbers: First Look fan post. It provides a little background info for this post.

This post looks into the Cowboys' 1st round pick, Tyron Smith.

The least kept secret of the daft? The Cowboys were going after Tyron Smith. The only alternative was a bounty of picks in a trade down scenario, which evidently did not materialize, at least to the level that would have tempted JJ to trade down.

Personally, I would have preferred that we took the trade offered from a logistics standpoint, however, after knowing what we likely would have done with them I am happy that we stayed put and took our guy. Which would you rather have; Tyron Smith and Bruce Carter, or Castonzo/Solder and Mark Ingram? While I view Smith as only marginally better than Castonzo, considering that I likely would not even take Ingram heads up over Demarco Murray, the answer for me is obvious.

(These are my thoughts on tape I have seen of the prospect, if they differ from popular opinion or match what the scouts say, it is because that is what I saw with my own eyes. I recommend everyone review and judge for yourself, you may find the results surprising.):

Very athletic build, definitely lives up to the workout warrior moniker. Has a very good frame, and looks like he should be able to carry extra weight easily without sacrificing any athleticism. Sits very well in his stance with a wide base, getting much lower than most of his height, and uses leverage well. Very quick and nimble in his movements.

In pass protection, sticks like glue to his man and shows good use of hand placement, both initially and throughout his block, combined with good foot placement and movement against both bull rushers and speed rushers. This was pleasantly surprising for me to see, as I was expecting for him to show that he relied more on his much ballyhooed athleticism than proper technique as most prospects with an athletic edge tend to do. Did a very good job of keeping his man in front of him and stymieing any penetration attempts, and on rare occasions that his man got around him, was often able to still provide enough disruption with his long arms that the QB was able to still make his throw. Showed good knowledge of assignments, not getting confused on attempted stunts and twists. The only real weakness that caught my attention was that he was sometimes slow off the snap, however his first step and kick step were so fast that it more than made up for it. However, with the higher level of competition this will be more important in the NFL, so it is something to keep an eye on.

In run blocking, he performed adequately overall, but I just felt something was lacking. He does not show a mean streak, and often engaged his assigned defender much the same as he does in pass blocking. While this will get the job done to an extent, when run blocking, especially as a RT, I would expect to see a more aggressive approach, seeking contact and eliminating his man and going on to the next one (or two). Smith often blocked his man and removed him from the play, but did so by engaging him and using footwork and hand placement, instead of with pop and strength. Hopefully this is something that can be coached up to improve.

Scored as the 2nd highest available tackle, largely due to the lower presence score and due to the fact that the person above him killed the agility drills (Castonzo). Athletically a phenom, but not a once in a generation talent. 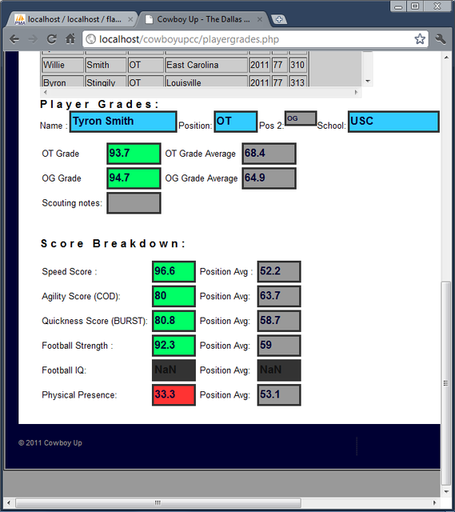 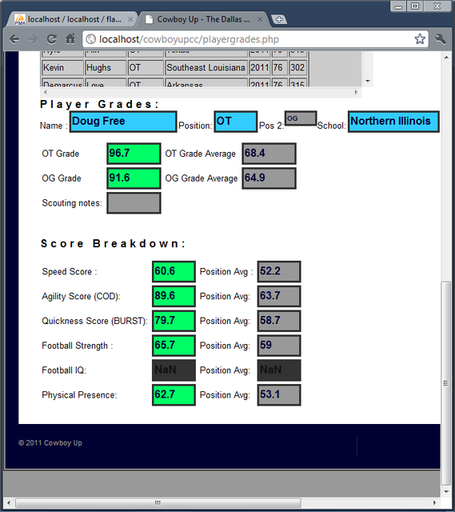 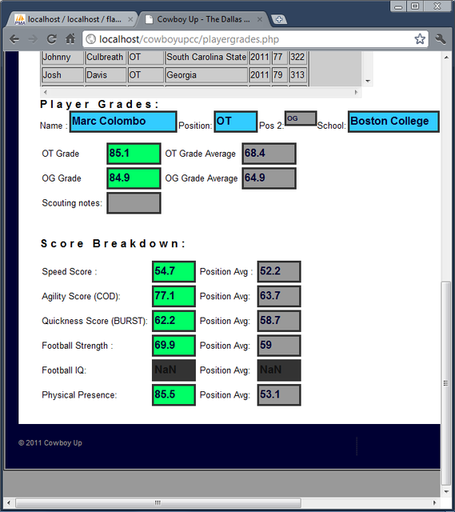 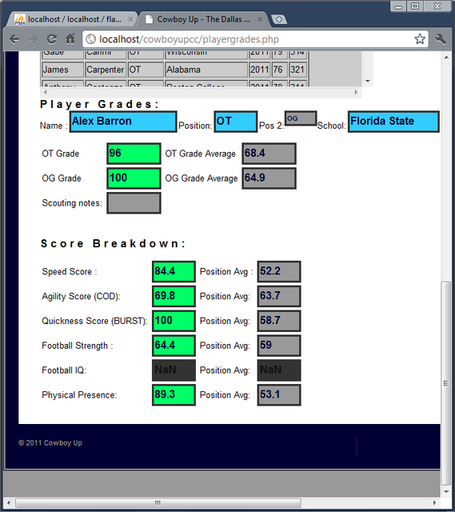 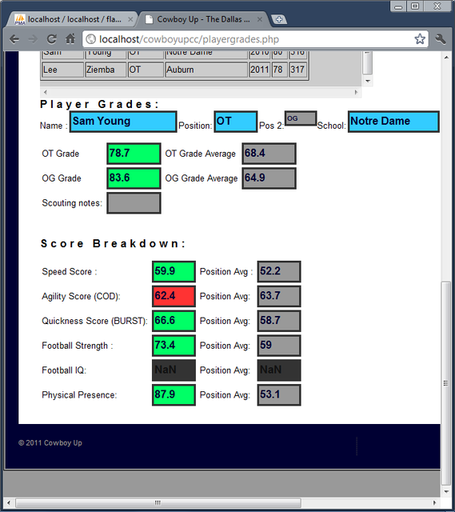 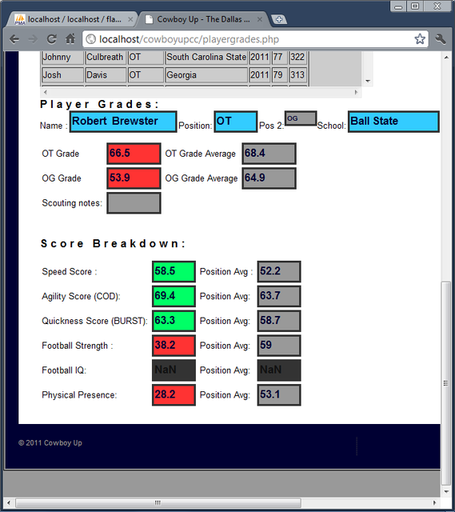 No grade available for Jeremy Parnell.

Athletically a specimen for the position, with good technique in pass protection. Leaves something wanting in run blocking. However, I would much rather have a pro in pass blocking than an ace in run blocking. For better or worse, he is basically an anti-Colombo (bad knees or not).

He will not bring a mean streak to the line, and does not display any nastiness. Assuming Colombo no longer starts, that role will have pass to one of our other prospects. Moving into the future, it would appear that we will no longer have a weakness on the edges in pass protection, and opponents will have to rely much more on scheme and interior blitzes than individual performers (cough... Vikings playoff game... cough).

Has the athleticism to be a terror in the running game, hopefully our coaches can tap into that potential... but even if they are incapable, I am still excited about the potential return of the 7 step drop to our offense.

Thanks for reading, up next is: Josh Thomas.