Still in the throes of the lockout, we are left with not much to ponder these days, save for the occasional lockout notes and what free agency targets we may pursue. So with topics still being sparse, I decided to start a new series that focused on potential UDFA targets. No matter how bad the cap crunch gets, many transgressions can be forgiven by finding the next Tony Romo or Miles Austin.

While inputting data on the previous series, Grading the Numbers, I came across a few prospects that caught my eye, and really left me wondering why they were not drafted. Of course there are a myriad of reasons, but if a team can draft a learning challenged DE in the 7th round based solely on potential (Lawrence Guy, fantastic story of overcoming obstacles to achieve a dream and a highly recommended read), surely someone would have taken a flyer on this guy at some point, just based on athletic potential.

But for whatever reason, this player was completely passed over, and is now a street FA with his NFL dreams in dire jeopardy. I encourage everyone to delve a little deeper into the potential of these prospects, and feel free to opine your two cents about them as well, specifically if you like the prospect or didn't, and how you feel they may help our team. 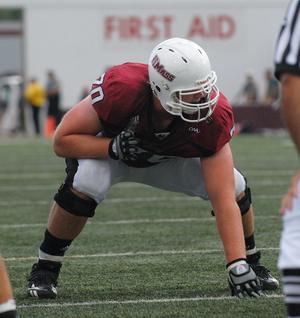 Please note that I have begun working on and implementing a new formula for Physical Presence, so these numbers may not be indicative or accurate of the prospects final Presence score. I will indicate here when the new formula is completed.

Another prospect lost in obscurity, not much data exists on this player from UMass. He played left tackle and guard for Northeastern, before transferring to UMass to take over at left tackle for Vladmir Ducasse after the demise of the Northeastern football program.

His measurables are ridiculous for a guard, and in the elite range for a tackle. He also does not have the appearance or build of a guard, and has the look of someone that spends some time in the gym and away from McDonalds. Does have good base and sits well in his stance, and while I would say his wingspan is above average for a tackle, it would be elite for a guard. In the few videos that I saw, when he came across pulling from his interior position with his arms outstretched, it was quite intimidating.

He moves very well in space. Looks to be a better pass protector than a run blocker. Showed good leverage and strength, but lacked the requisite leg drive while drive blocking and does not explode into defenders while pulling in the running game. Excellent hand placement and upper body strength to redirect defenders.

Not a nasty brawler type, but I wouldn't label him as finesse either. Somewhere in the middle. Won't set the tone for the line, but plays strong enough for him not to be taken lightly.

Played well against speed rushers. Was somewhat more susceptible to the bull rush and could be pushed back, but had good recovery and while he did not stone wall rushers and gave up some ground, they never got by him or fully collapsed the pocket.

Small conference player with good smarts, will need some time to adjust to the pro game. Very versatile, and could play several spots on the line's interior and exterior, which adds to his value... though his best position is probably LG. While likely not an immediate roster addition, he could find himself being called up to the game day roster sooner rather than later due to his ability to back up three or four spots on the line with one roster spot. With a great training camp, he may even be able to find a spot on the initial 53 for whatever team gives him a shot. This is another prospect with huge upside, little risk, and much sought after versatility. I see him getting a shot with his home town Pat's (had some one on one time with their scouts at pro day), but would love to see him get a shot here instead.

Notes on the prospect from around the interwebs:

Draftinsider.net:
Gregory Niland Massachusetts T
Bio: Northeastern transfer awarded all-Conference honors as a senior. Broke into the starting lineup as a freshman playing left tackle before moving to guard as a senior.

Positive: Nice sized lineman with NFL ability. Quickly gets off the snap, gets his hands up, and works them throughout the action. Blocks with good lean, strong at the point, and easily turns defenders off the line. Fights hard throughout the action, effective run blocking and in pass protection.

Analysis: Niland comes with a solid overall game and the versatility to line up at several positions on the offensive line. Unlikely to be selected at any point during the draft's seven rounds, he's a practice squad player who could get on a two-deep in a system that does not ask him to block in motion.

Masslive.com:
Article about the xfer exodus from Northeastern to Umass.

What do you think? All posts and opinions encouraged.

If you have a particular prospect or pet cat that is UDFA and would like them to be a subject of one of these posts, please say so below. Likely the prospect has already been graded, and if the score out justifies it, I will work them in. Freaks of nature preferred but not required.