Just say "see you around" and perhaps Happy Birthday. HAHA

I can only half-apologize for the title teaser. Like most, I expect the Cowboys to release Marion Barber once football operations get under way. His current contract is impossible to handle and I doubt Drew Rosenhaus will accept the salary reduction the Cowboys will have to offer. And rightfully so.

The Cowboys seem to have moved on. With three younger backs with greater upside and reasonable contracts, well, two with contracts and one eagerly awaiting the chance to sign, it wouldn’t be shocking to find out the Cowboys don’t even try to renegotiate the contract. The Former Barbarian turns 28 tomorrow. However, while I doubt MBIII will have many, if any, more highlights like the dynamic ones here in Dallas – more on that later – I do expect some team to sign him. Most teams are relying more on a RB rotation and MBIII has plenty of more fight in him to celebrate a short yardage 1st or TD. My reasoning for saying "see you around", mostly rational though partly hopeful, as well as some highlights after the jump...

The unfortunate truth is that many Cowboys fans will be quicker to say "good riddance" than to remember one MBIII highlight that I consider the epitome of a relentless rushing effort.

Please count how many tackles, a few of which he doesn't even have momentum or his feet churning to help him, MBIII manages to break on this "2 yard run." Simply barbaric.

This highlight could be a post of its own so I hope you accept a slight tangent. This game was in 2007. That OLine play kind of reminds you of 2010, no? Well, imagine LT Flozell is instead Colombo pulling to the edge and getting worked by a blitzing safety, in this case Rodney Harrison. Now, Witten is a great blocker, but having him matchup heads up against a 3-4DE with no help is a bad idea. While he gets pancaked, it is somewhat impressive that he does at least hold his own for a second and manages to take Jarvis Green down with him. If Flozell does his job and blocks out the edge, in this case a DB instead of a LB, MBIII should get around Witten. What also didn’t help was the interior line play. Kosier actually does a decent job. This is a case of a unit malfunctioning. If you watch closely, Kosier is supposed to double the dominant Vince Wilfork and he takes his first step outside to make sure Gurode has space to crash into the NT as well. However, Gurode doesn’t even lend a hand, just stumbles and closes off MBIII’s cut back lane. MBIII escapes the safety, not only the player but the 2 points, with virtually no help. That is the hardest fought 2 yards since Barry Sanders' backfield shuffles. And a final note, when Garrett says OL that will finish a play, I think he means more than just finishing the block on their man. I assume he also means 2nd level blocks or trying to help save a blown play. Notice how Colombo is the only OL anywhere near MBIII later on in the play trying to find a way to help. Hey Chia, "that’s something we shall have to remedy then." 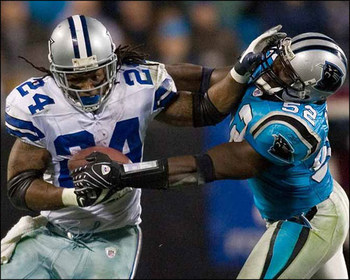 But getting back to MBIII, the play against the Patriots was during the final dominant year for the Barbarian. In 2007, MBIII averaged 4.8 yards a carry, as he had done the season prior, though for the first time surpassed 200 carries which was one and a half times more often than he had done the two seasons prior. However, he was not the "starter" in any game that season. The following season Barber became the "starter" and signed a big money contract.

MBIII has had a solid career as a Cowboy and I will think back on his Barbarian antics in good spirits. He actually has missed very few games due to injury, though during and since he was overworked in 2008 the Barbarian seemed to always play through some sort of injury, like a possibly torn quad or a possible cracked rib. I think MBIII will have a solid 2 to 3 year run with the next team to give him the chance. He is still a solid blocker and receiver. Combine that with his aggressive running style, and a few teams could incorporate his skills as a short yardage back and/or 3rd down back into their RB rotation. Consider his career stats. Many may think that MBIII has taken too many hits and can’t run like he used to. Perhaps a little. But I see a RB that has had good seasons the majority of his career, except for the one when he was overworked (but still above average) and another combating injuries, bad OL play, and a reduced role. 2010 was his only subpar performance.

For further consideration, here is a link to an impressive collection of Barbarian highlights.

And finally, this last clip which requires some consideration.

That’s what I’m talking about. He sees a hole, sidesteps a defender in the backfield, shows burst to get through traffic, and finishes the play with a hit and drive to get into the end zone. Ahhhh, the Barbarian of old…no, wait, this was 6 months ago! Many may be left with the "dumb" penalty as a final image, I was left wondering how much more Barber actually has in the tank. Dare I say the scandalous statement: if he is willing to restructure his deal to a friendly 3 year contract and Murray shows in camp what I expect…let’s trade Choice and have MBIII as the 3rd RB alongside Felix and Murray on game day.

Happy Birthday Barbarian, you’re more than alright in my book.

How will you remember Marion the Barbarian?