At my last count, a little over half the Cowboys roster, 36 players, have a twitter account. When looking at twitter stats, we traditionally look at the number of total followers as a proxy for how popular a given player is.

By that measure, Miles Austin (115,430 followers), Dez Bryant (84,680) and Jason Witten (49,167) are currently the most popular Dallas Cowboys players. Keep in mind though that other players like Tony Romo or DeMarcus Ware are not on twitter, so that tempers those numbers a little. The other factor to consider is that the quantity of followers tells you nothing about the quality of your followers.

One way of doing that is figuring out which players are being followed by a very select target group: other players in the Cowboys clubhouse. After the break, who's following whom in the Cowboys Clubhouse.

The most followed players: There are a lot of gaps in the Cowboys twitter network, and there are a number of players who are only being followed by a handful of their teammates. Similarly, there isn't a single player that's followed by everybody else. The most popular player, by number of teammates following him, is Miles Austin, who has collected 22 followers among his teammates.

The second highest number of clubhouse followers were accumulated by Dez Bryant with 21. As to whether his teammates are following him out of interest or out of concern, that's anybody's guess. Jason Witten, who comes in third in total followers, only has six teammates following him so far. However, Witten is only a recent convert to twitter (as are many other players), so his numbers could rise further. Below is a table with the top 10 most foll0wed players in the Cowboys clubhouse.

Of note is that these top players span all tenure classes, from last year's rookie class to veterans like Barber and Austin.

The followers: On average, each of the 36 Cowboys players follows 11 of his teammates. Martellus Bennett, who uses two twitter addresses to keep track of what's going on, leads this category and is following 20 teammates, AOA is second with 16. After that, there are 12 players who each follow 15 of their teammates.

Cowboys tenure: One interesting thing about the Cowboys' twitter usage is that there is a distinct difference in usage and following patterns by tenure with the team. Obviously, the young guys on average use twitter more than the veterans, but there is also a marked difference in who is being followed in which tenure group.

The table below shows which players are being followed by which tenure group (year in which they joined the Cowboys):

The crazy graphs: When I initially looked at this a couple of weeks back, I thought, wouldn't it be neat if we could get a graphical representation of the twitter network within the Cowboys players?

But I wasn't able to show 390 different connections in one graph, so I split it into two graphs. The first picture below shows who the 2010 players are following. The second picture shows who the remaining players are following. And, yes, I know that Jesse Holley joined the team in 2009, but by the time I noticed that mistake it was too late to redo the two pictures.

The data I used is about three weeks old so it's already a little out of date, but it should give you a good idea of the overall picture. Because some Cowboys players accounts were either blocked or inactive, I looked at 32 twitter accounts in total and crosschecked who was following whom in the charts below:

Cowboys class of 2010 and who they're following: 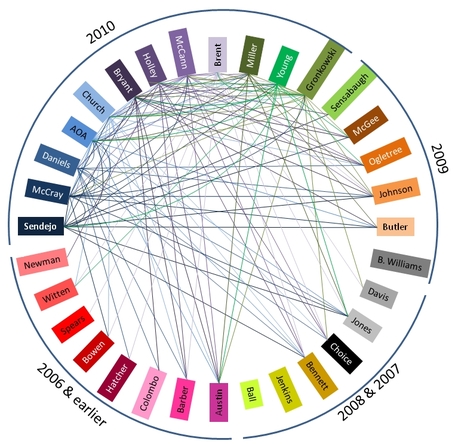 Cowboys veterans and who they're following: 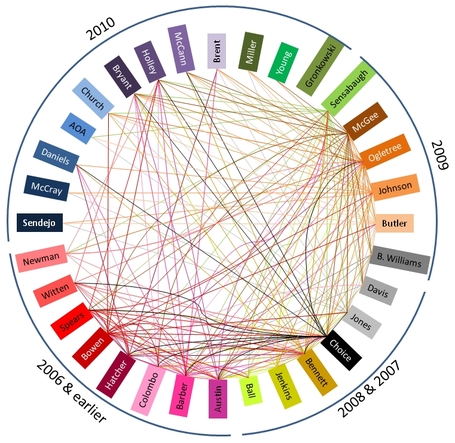