There is much ado about the current state of the Cowboys defensive line. Three heavy contributors are going to become free agents if they are not re-signed within the 72-hour period that reports have claimed will follow the commencement of the 2011 NFL season.

It’s a good thing new defensive coordinator Rob Ryan started looking at film before the lockout began. Claims of his excitement for what Stephen Bowen did in 2010 were circulating soon after Ryan was hired, and could make him the highest priority defensive lineman re-signing. If the Cowboys were to play a game tomorrow, Ryan’s two functioning DL rotations would be Igor-Brent-Ratliff and/or Igor-Ratliff-Lissemore (please note the order-position).

When you discuss defensive linemen in a 3-4 front, it must be understood that not every rectangle is a square. The most basic assignment a defensive linemen will have on any given play is his gap responsibility. Some players are great at 2-gap, some at 1-gap, and the greats can do it all. What the defensive coordinator is trying to do at the line of scrimmage will be predicated in part by what his linemen can offer. It’s one reason the Ryans love versatile guys. Not having "tell" linemen that can only be effective at one assignment type provides the defense with flexibility and uncertainty for the offense opposing them. It's the same principle, but opposite side of the coin, as having the players shift pre-snap in coordinated chaos to create confusion and unpredictability for the offense. 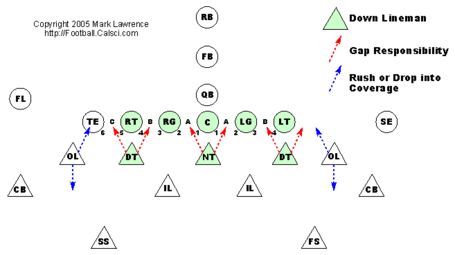 If you look at the diagram, you will note that gaps are lettered alphabetically from the center-out. For simplicities sake, I will add R or L to designate the side of the line as it pertains to the defense (why right outside linebacker DeMarcus Ware is usually up against the left tackle and blind side of the QB). Each letter is a gap. Each gap the specific assignment of a player in the defensive front (linemen and backers). The league usually sees 2-gap nose tackle responsibilities in most 3-4 defenses and these so called "space eaters" are often misunderstood. These Goliaths are not assigned to just stand up and be big. They are supposed to constantly push on their opposition and collapse the pocket, usually double teamed, but always with the intent of not allowing anyone through their gap assignments. They must be in a position to shed/split the blocks and make a play. How they accomplish the feat is often situational.

If a NT has both A gap responsibilities and the center and guard double team him, his assignment is not always to get past the blockers, at least not immediately. If the NT can’t shed the blockers to make the tackle, sometimes keeping the blockers in the way of the gap the offense is trying to turn into a running lane will make all the difference. If not, the runner and/or lead blocker are now the linebackers’ problem. In such a situation, it could prove even worse if the NT tries and breaks away from one blocker early, because if he guesses wrong, trying to get through the A-Right gap with a swim move when the run play is sent up the A-Left gap, the NT will be out of position and one of the blockers will likely be free to find a block in the second level of the defense. If one player blows his assignment or tries to do too much and misses, the results could be devastating.

It is why defensive linemen with 2-gap responsibilities often don’t get many sacks. They are not trying to avoid the blockers completely and get to the quarterback, their assignments will only allow that once they recognize it is not a run and their gap assignments are safe, then they can go after the quarterback…but again the risk remains, if they try a spin move or get too far out of position, then the QB now has a running lane. Thus, they are usually branded as ‘run- stuffers’.

It is a big reason why the defensive front-three under Bill Parcells rarely got a lot of sacks. They were primarily assigned to be 2-gappers; but under Wade Phillips, Ratliff and the outside linebackers almost always had 1-gap assignments, in which case their job is to get to and through their gap as quickly as possible, and are aptly named ‘pass-rushers’. It should be noted that pass rushing skills are also defined by the angles one takes to rush the passer. A 3-4 DE will never 45-degree angle the edge like Ware who is coming from outside the C or D gap. Though 3-4 DEs also need to have some bend to them because they don’t often have a straight-line like a NT or a 4-3 DT. Perhaps the clearest example of this being the great 4-3 DT Warren Sapp’s problems when playing 3-4 DE, actually forcing an almost 4-3 like switch to many of Ryan’s fronts with Sapp closer to DT spot, for that straight-line pass rush, but almost never as a 1-gap NT; likely because Sapp was not a very effective 2-gapper as a NT. Here is what twin brother Rex had to say about it.

"It takes a special cat to really play within the structure of the defense and be unselfish and all the things that come with it," said Ravens defensive line coach Rex Ryan, who's brother, Rob, coordinates Oakland's defense. "Warren Sapp's one of the best 4-3 tackles of all time. You'd think he'd be able to do it (convert to end), but, and I don't get to see their games, but something's not happening over there."

Ironically, this quote is from a pretty good 2004 ESPN article, with some great quotes, entitled – Defensive linemen do the dirty work in 3-4.

Here is what Warren Sapp had to say about Rob Ryan's defense with the Cowboys and what we can expect in 2011 - from dallasnews.com.

But back to the point. A-B gaps on each side and a C gap on the strong side when there is a tight end make five, not to mention the two edges. If your 2-gap DEs take care of four gaps, your two outside backers cover the edge, and then your nose has 1-gap duties, your middle backers are free to cover the tight ends and running backs, or for the well known and anticipated Wade ILB blitz. If those 2-gap DEs decide to pass rush through one of their gaps…well, just do the math. "It takes a special type of cat to really play within the structure of the defense and be unselfish." It's a reason Jason Garrett's 'Right Kind of Guy' philosophy will work great for Ryan and his defense. It is also the reason I didn't like Nick Fairley and Marvin Austin as possible Cowboys draft picks to bolster the defensive line. So who will be the free agents likely to do so and how will Ryan use them in his defensive schemes?

Unfortunately, the hour is getting late, the post is getting long, and you will have to wait for Part II of Cowboys Defense Under Ryan.