Many years ago, I was a lifeguard working at my University's pool system. I remember a visiting professor from Germany and his family who used to come to the pool. Because I was a physics major at the time, I struck up a relationship with him and his family and even helped his older (he had 2) daughter improve her swimming stroke. The younger daughter was 5 years old and what was immediately noticeable about her, beyond her youthful exuberance about all things chlorinated, was a wide and long scar that ran vertically from her upper abdomen to just below her neck. At one point, the conversation came up about her with her father and I learned that she had been born with a heart valve problem and had endured three significant surgical procedures to help fix the problem.

Now this girl was always smiling. She would run around the pool deck, despite my repeated reminders not to do so because she could slip and fall, squealing as she chased monarch butterflies and took in all of the wonder and joy that was the unending summer beauty in Southern California. I'm sure their entire family realized and appreciated the climatic differences from Munich.

Then one day, as with all things that continually test fate, my worst fears were realized. The little girl was having the time of her life dancing and chasing her sister around the pool. Suddenly, she tripped and went into a head-first slide that would have made Pete Rose proud. Many of you will know what I mean when I say that as I watched the whole thing happen in front of me, I could almost "feel" the pain as she skidded along the concrete. The resulting road rash was difficult to look at and it covered her chin, arms and legs. But then something strange happened. She didn't try to get up. Instead, she just sort of laid there sprawled out as if waiting for the umpire to call her safe at second. She didn't cry. In fact, she didn't make a sound. She looked up at her mother who was sitting on the lawn about 10 yards away. Her mother, who also saw the whole thing, did not react. She gazed at her daughter through her dark sunglasses and they just stared at each other for what seemed like several moments. The girl slowly picked herself up and began gingerly making her way to her mother where she promptly curled up in a ball in her lap.

I was reflexively letting the other lifeguard know I was coming off of my chair and grabbing the First Aid kit to assist the girl. As I came upon them, the little girl was still in a ball between her mother's crossed legs with her thumb in her mouth as blood began to ooze out of many of her skinned parts. As I crouched down beside them, her mother could tell I was unnerved by the whole thing and she put her hand on my shoulder as I was fumbling to find bandages that were the right size for her daughter. "Don't worry" she said as she put one hand on my shoulder, "it is just a scrape". Now I was looking at his girl and thinking to myself, ‘No, this is no scrape. This is what people who work in the ER see when motorcycle accident victims come in. She is bleeding from what looks like a dozen spots.'

But then it hit me.

This little girl...along with her entire family... had built an iron clad tolerance to pain and suffering. They had been through hell together and they'd done it on multiple occasions. They had to repeatedly see their daughter's ribs cracked, her chest cavity opened up and subsequently help her through intolerably painful recoveries from the surgeries she had undergone. This, for them, was truly just a scrape.

The worst was behind them.

Several days and a bunch of Neosporin and band-aid's later, the little girl and her family were back at the pool. As she went sprinting around the deck routinely ignoring my pleas to slow down, I realized just how strong the ordeals she had survived had made her. I also realized how those things had galvanized the resolve of that family and how it had changed their outlook on life. Truly, their perspective, while built upon something I would not wish on anyone, was amazing. In fact, I have never forgotten that day and although they'll never know it, it's changed me too.

Now, you're probably saying to yourself, "Nice story, but what exactly does that have to do with the Dallas Cowboys?"

Well, as I think about (what could be) the upcoming season, it occurs to me that there are parallels between what that family had been through and the Dallas Cowboys.

Think back to when Jimmy first arrived in Dallas. He criticized the outgoing coaching staff for leaving work at 5 P.M. every night after a horrendous season. He wasn't a fan of the mild temperatures in Thousand Oaks for training camp or the laid back practice tempo and structure the team had become accustomed to. Jimmy was a tough guy and wanted a team with a tough guy mentality. He put together a strategy and set of tactics that would enable him to get what he wanted. I remember how many people derided Jimmy for putting his team through training camp at St. Edward's University in Austin where the temperatures would routinely top out in triple digits. I remember the physical nature of those camps (how many of you remember the fights that broke out every day?). That team endured a great deal of pain and suffering together and it made them so much stronger than any of their peers. When they had emerged from those painful and torturous periods, they developed a different group mindset. They had been torn down and rebuilt in Jimmy's image. That team had become almost immune to the rigors of what lay before them in the upcoming season because they were willing to make sacrifices in order to achieve the main goal. They were so much stronger, physically and emotionally, for having gone through it together. 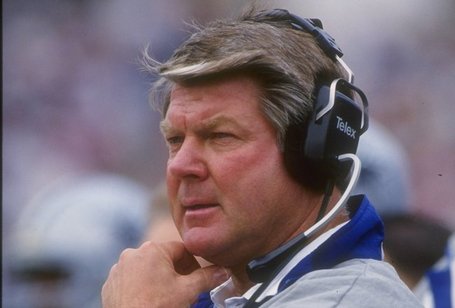 The worst was behind them.

Fast forward to July of 2011. Coming off of ANOTHER horrendous season, Jason Garrett is faced with changing the culture of a team that has become used to training camp in the temperature-controlled confines of the Alamodome, accustomed to a practice tempo and structure that is slow, used to a culture lacking in accountability and a team whose leadership has been questioned. I don't claim to know what KIND of team JG wants to create as the Head Coach. But I do know this; for years now, I have lamented the lack of nastiness and physicality that pervades the post-Jimmy Cowboys. Jason is not the tough guy that Jimmy was, so I am not holding my breath there, but it is clear to me that the team is not going to win a Super Bowl just because they led the league in player-organized practices during the extended lockout.

Jason Garrett has the unenviable task of trying to create a fire in the belly of a group that has heretofore shown nothing of the sort. I don't enjoy comparing the unproven, untested Garrett to a Cowboys legend like Jimmy, but just like Johnson, he has to develop a level of commitment and passion and sacrifice that is largely non-existent in this mistake-prone bunch of individuals. It's a paradigmatic shift not unlike the one Jimmy faced in 1989. Garrett needs to force these young men, through the creation of a new kind of Cowboys culture, to work harder than they have ever worked and to endure some pain together. Just like the little girl's family learned to endure hardship together and in the same way the 90's Cowboys learned to make individual sacrifices for the good of the team, I won't care about the outcomes of games as much if I know the team is leaving it on the field every Sunday because they have the right approach. For me, that's the first step towards greatness. 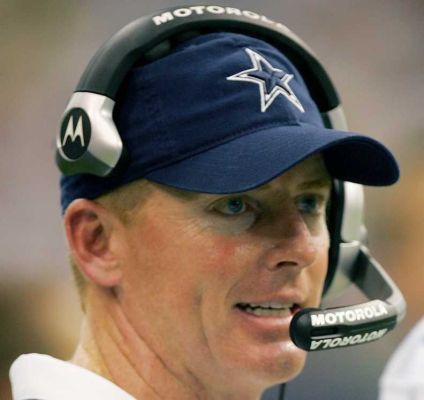 If they can develop that kind of mindset and become a team that is known for getting through adversity together and bringing nothing less than stalwart efforts to practice and game days, then I think we'd all say that the Dallas Cowboys were indeed back.

And then, the worst will be behind them.