New Cowboy Bruce Carter served up some quotes yesterday that have been making the rounds. Carter covered many topics, but mostly the recovery of his injured knee. The second round pick out of the University of North Carolina tore his ACL back in November 2010, and that precluded him from finishing his senior season. We know that Carter was formerly projected to be a first round pick, and his uncanny speed before the injury is very intriguing. Carter's ability to play in space as well as deliver hard hits makes him the perfect project for new defensive coordinator Rob Ryan.

Yesterday in Quick Hits, we talked about the fact that the Cowboys are reportedly giving Bradie James, Sean Lee and Keith Brooking equal snaps for 2011. Earlier today, O.C.C. looked at the fact that Dallas carried five inside linebackers last year. He mentions Kenwin Cummings as player on the rise at 3-4 ILB. The intersection of the two articles seems to be, how much will we see of Carter next season? How many defensive snaps will he see in 2011?

For all the analysis that can be done, we don't truly know which of his myriad of defensive schemes Rob Ryan will employ, and how. Ryan has never had an edge rusher with the talent of DeMarcus Ware, so you'd imagine that minor wrinkles allow Ryan to creatively adjust other areas of the defense. He also has a nose tackle with the ability to cause havoc in the middle in Jay Ratliff, so that's two dominant pieces to anchor a scheme around.

The Cowboys ILB's of 2010 had the following snap counts:

Jason Williams also logged a handful of snaps before moving on to Carolina's 4-3 defense. Using the numbers from last year, it's hard to imagine Bruce Carter earning triple digit snaps at linebacker in his first year. Split evenly amongst the three players, we're looking at 650 snaps per man. For Keith Brooking, that seems acceptable. Heck, some might argue that's still too many for the veteran in his 14th season. That's a dramatic increase for Sean Lee, but he shouldn't have a problem judging from his rookie campaign. Bradie James coming down to 650 snaps, though, should be interesting. James is regarded as one of the defensive leaders, but he has amassed over 900 snaps in each of the last three seasons according to PFF.

If the snaps are divided this way, that leaves a limited opportunity for Carter to see the field, even if he's at 100% for the entire season. Barring injury, or a major fall off the cliff from Brooking, it's difficult to carve out snaps for Bruce Carter based on 2010 snap totals.

On Rob Ryan, and how Carter will be used:

"He’s a great guy and he’s got a great personality," Carter said of Ryan. "I just can’t wait to get out there and play for him. He has a great scheme and I think our defense is going to be great.

"He’s just going to use me in different (ways). Sometimes I might rush or cover, playing in the box as opposed to having to play in space. … Just being in my natural position, I feel like I’m just ready to go."

BTB member Chandus posted his two-part series, The Schematic Advantages of having a Ryan, earlier this offseason. In it, he gave some examples of unique formations Ryan employs, and some instances where you could see Carter get on the field, provided he's fully healthy. Here's an excerpt from Chandus' part 2 (click here for full article): 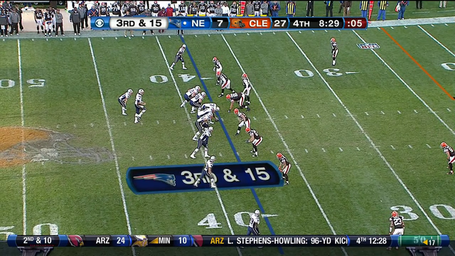 The down and distance forces the Patriots hand and Rob Ryan responds with a twist. It's a posse lineup for the Patriots and Cleveland responds with 1 DLineman, 4 LBs and 6 DBs. Schaefering has his head in the inside shoulder of the LG (2-Tech). Gocong is part of the twist, he's the standing LB 11 yards deep, he's there to provide help in slants or posts against the WRs or against the TE. Brady has no way of knowing. Bowens is right next to Schaefering's hip and in front of the LT. Roth stands in front of the RT. Barton stands on the edge of the LT. Sheldon Brown, the RCB, screams blitz. Ward is his backup 10 yards deep. The other deep Safety stands outside the camera view. The other part of the twist is that this scheme is a 4-Safety scheme, with Nick Sorensen lined up in front of the TE and Ray Ventrone in front of Wes Welker.

Could Bruce Carter become a 'specialist' linebacker this season, where he plays the wild card? Everything about his skill set indicates he'd be the perfect player to line up where Chris Gocong is in the above picture. From the same piece, the Quarters 0-4 employs four outside linebackers. One could envision Carter's diversity earning him some snaps here, as well as in the Dime 1-4 as one of Ryan's four safeties.

In Cleveland last year, Ryan was much more diverse in divvying up snaps to his seven linebackers. OLB Matt Roth played almost every snap, as did DeMarcus Ware in Dallas. The opposite OLB tells a different story. Anthony Spencer actually logged more snaps than Ware did, but in Cleveland, Scott Fujita, Marcus Benard and David Bowens had roughly a 5:4:3 snap split. The 2000 or so ILB snaps we spoke of earlier were divided approximately 4.5:3:1 in Cleveland amongst Gocong, Barton and Jason Trusnik, respectively. The Cleveland defense gave their seventh linebacker 220 snaps.

I think it would be safe to project a healthy Carter as the seventh linebacker in Big D (Ware, Spencer, James, Brooking, Lee, Victor Butler). In this light, Carter would seem to be able to pass the 85 snap marker with ease.

So what are your projections BTB? Will Carter get to 85 snaps for the season? That's roughly five snaps a game for a 15 game season. It's roughly 10 snaps a game if he only plays in half of the games. It should be interesting to watch how well Ryan integrates Carter into the gameplan. With the accolades given Cummings by Ryan and former teammate Bart Scott, it appears that the Cowboys are transitioning the inside linebacker from a position of worry into a position of strength. It sure would be nice to have a training camp to see whether these appearances are deceiving.