This lockout has many of us going crazy. The casual (read: moderately obsessed) Cowboys fan is suddenly studying everything from business economics to the art of the forward pass. Evidence: The recent obsession with Jason Garrett's offense. Why is it crazy to speculate about his offense? Well, we've been watching it for years. An outside observer might think he just crash-landed his space pod in North Texas and started spewing out revolutionary offensive philosophies. Okay, I'm exaggerating.

Anyway, the rampant discussion surrounding Air Garrett, coupled with my intense interest in football philosophy, has led me to this post. I will attempt to demystify our prolific offense, and, yes, explain why some (exaggerating egotists) claim to be able to predict our play calls.

The objective of the Air Garrett offense is to score more points than the other offense. Revolutionary, I know. The intrigue lies with the means, not the goal. The identifying philosophy of this offense is to stretch the defense vertically and attack the middle.

Blasphemy! Garrett wants the deep ball! Force it downfield every play! Let it soak in.

Yes, we do always have at least one deep route. Yes, we do throw the ball downfield. No, that is not the purpose of the offense. Allow me to explain.

Why do we want all of these features? Because we want to force safety help on every play. This means opening the middle of the field. This forces a linebacker to cover Jason Witten. Speaking of Witten...

Tight ends are the key to this offense. Our tight ends are freakish combinations of Tackles and Slot Receivers. This means a two-tight-end set demands the respect of a goal line offense, while having the firepower of a four-wide set. They will run the entire route tree, and exploit the open field created by the receivers. At any time, they may stay in to block. Tight ends are expected to be the most versatile players on our team. Second are the...

A fullback should be as capable blocking as a tight end. They have to create a mismatch in the running game, and a safety net when staying in the pocket (take note, Chris). They should have reliable hands. The key difference between the fullback and tight end is the route running. A fullback's route tree is far less complicated.

A slot receiver in our system must have impressive burst and route running abilities. They run the same routes as the tight end, but have the extra quickness when necessary. The most important thing for our slot receivers are their balls. They'll be going over the middle all the time. Last, but not least, we have...

Quarterbacks in the Garrett Offense:

The most important thing for Romo is to make the right throw. Power and accuracy are secondary. We will have someone open, we simply need the quarterback to find out who, and throw it in his vicinity. A throw that requires pinpoint accuracy was likely the wrong throw.

Alright, so now we know who's running the plays. 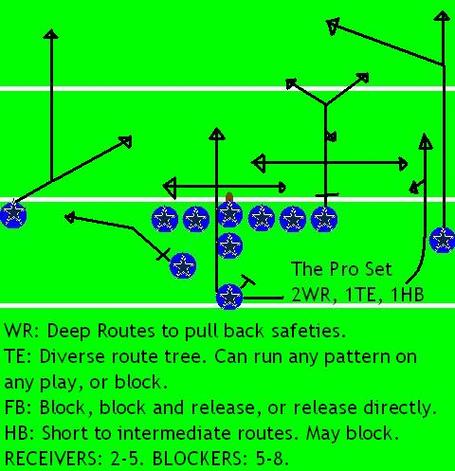 This is an incomplete look at the potential of our base set. With all the possible receiving threats, we can easily shred a base 3-4 or 4-3 defense through the air. Both safeties will be helping over the top, leaving three linebackers to cover a TE, a HB and a FB. Easy picking.

The idea is to force the defense to respect the pass, and play nickel against our base set. With our tight end leading the way, we can run on any nickel defense. 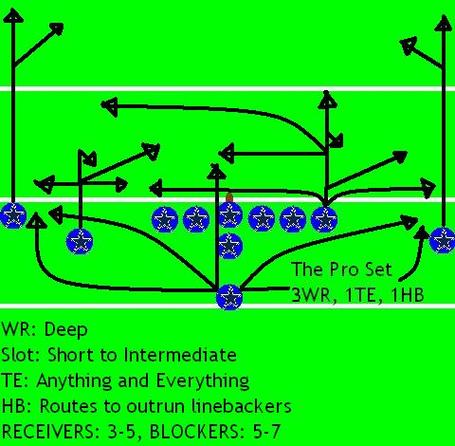 This is our "other" base set. The main purpose behind using a third wide receiver is to force the defense into the nickel in order to open up the running game. The front seven becomes a front six, and Felix Jones is headed for daylight.

A note about the playcalling. Think about the Ryan defense (either one), and the key is to disguise the rushers. Now flip that over to offense. What does Garrett do? He disguises the blockers. Any fullback, tight end, or halfback on the field (assuming Tashard Choice and Chris Gronkowski aren't around...) is potentially a receiver or blocker on any given play. To address the psychic fans who can predict what plays we're going to run, let me show you how original that is.

Yea, I would've been right on most of those. Unless it was a run. But if you really think you knew the play before it was called, and said play was successful against the defense...why are you not a defensive coordinator? Oh, right, you didn't know what was coming.

The Center is a well-rounded blocker with elite strength. They should be able to nullify a defensive tackle compensate for the smaller guards.

If you want to learn more about the original Coryell offense, you can start here. Yes, it's Wikipedia, but you won't be disappointed.

There goes 1000 words. Hope you enjoyed. I'll try to improve on my graphics next time. Please let me know what you think!