Power Rankings! Some people think they are the greatest scourge to have visited Pro Football, others can't help but pore over them, dissect them and have heated arguments about them. Love 'em or hate 'em, but you can't not look at them.

The Cowboys kick off the preseason today, and some of us are already counting down the days (30) until the Cowboys finally kick off their season against the Jets. Most of us have been waiting for football to come back for almost eight months. Be strong my friends. The event we’ve all been drooling over is tantalizingly close.

You’ve done your homework. You've devoured every season preview publication, starting with the most excellent MSP Cowboys Annual (which you can still order here). You’ve followed almost every day at training camp so far and are now excited about the preseason opener. There's only one question left: how good are the Cowboys?

In the last few days, many a pigskin pundit has released his version of the NFL power rankings heading into the 2011 preseason. So here's a ridiculously early look at the power rankings out there so far.

It's not how you start it's how you finish

The graph below is a summary of the power rankings we tracked last year and how the four NFC East teams were ranked week by week. May this serve as a cautionary tale about high expectations going into a season. Or as Jerry Jones would say:

"I can share with them and anyone else, just because it looks good on paper doesn't mean it's going to work,'' Jones said. "I stand as a vivid life example of that." 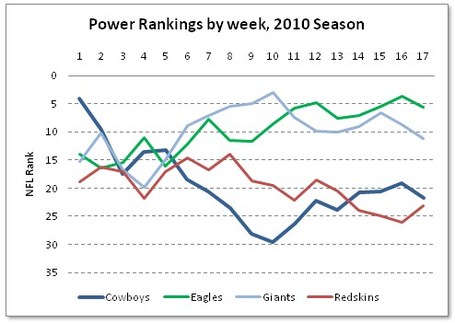 NFL.com (Aug. 9), 14th: "It's tough putting Jerry's boys even this high. But truth is, Dallas went 5-3 down the stretch, and the three losses were by a total of seven points. They probably should have gone 7-1. The defections of Roy Williams, Marion Barber, Leonard Davis, and Marc Colombo might end up being addition by subtraction. Meanwhile, new acquisition Abram Elam should be an upgrade over Alan Ball at safety. (Elliot Harrison)"

Sporting News (Aug. 3), 14th: "Jason Garrett provides a much-needed disciplined approach, and his offensive prize, Tony Romo, has responded by turning the corner as a leader in his prime."

Pro Football Weekly (Aug. 9), 15th: "It had to kill Jerry Jones to sit out free agency for the most part."

WEEI.com (Aug. 11), 14th: "One difference we’ll notice with the 2011 team as compared to the 2010 team is that it will play more disciplined football under head coach Jason Garrett. Penalties and turnovers killed the Cowboys at the beginning of last season, resulting in a poor start. This year, with a healthy Tony Romo and new faces on the coaching staff, the Cowboys should compete in a tough NFC East."

Walter Football (May), 10th: "I just think the Cowboys are really good, and they finally don't have a competent head coach for a change. That said, I will miss Wade Phillips' constant confused looks on the sideline. Those were always good for a laugh if I was having a bad day."

Here's how the NFC East fared in the preseason beauty contest: