In case that rock you've been living under just got pushed off of you, you are already aware that the Cowboys defeated the Broncos last night in the first game of their 2011 preseason. This was the first game action the franchise has seen since the Week 17 game against Philadelphia back in January. Let's cruise around the web to see what is being written about the team's performance.

-- Jerry Jones hinted that Larry Allen may be the next name added to the Ring of Honor, following Drew Pearson. [NBCDFW]

-- BTB's own Brandon Worley with a film review of the action. Must read stuff.

-- Martellus Bennett speaks about the leadership ability of current third string quarterback Stephen McGee [Ft. Worth Star Telegram] He also plans to return from his hamstring injury when the team hosts its next practice on Saturday. [NBCDFW]

-- Dave Campo has been removed from the sideline and put in the coaches box, while Brett Maxie was on the field, at least for preseason game one. [ESPN]

-- It looks like Jason Hatcher took the bizarro-Holland approach to off season conditioning. He was one of the defenders of note on the first couple defensive possessions, and it appears his improvement is a direct result of an effort to get quicker. [Star Telegram]

-- David Buehler remains optimistic he can retain the kicking job. Not sure if there was anything in his lone field goal from last night that is making me all warm and fuzzy. [DMN]

-- The Cowboys started off the game in a 4-3 Flex, as a tribute to the franchise patriarch, Tom Landry. [DMN]

"Without living in the past, we try to put that in front of our players to understand what the tradition means, what the star means, what the standard is and all that," head coach Jason Garrett said. "I think it fits in with all of that. It was Rob's idea all the way. He brought it up to me and I said I love that. That's tremendous.''

Follow the jump for screen shots of the formation and how the play unfolded. 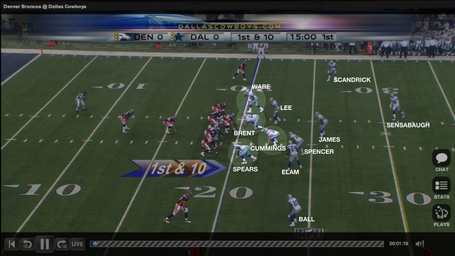 As Orton gets ready to snap the ball, Elam and Ball backpedal, and Lee and Spencer creep towards the line of scrimmage. 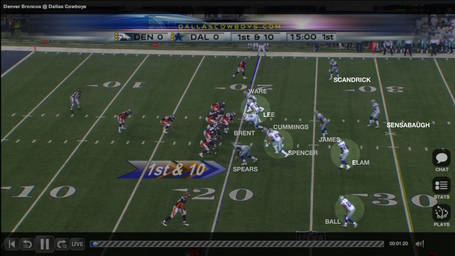 At the snap, Sensabaugh closes as Elam continues his retreat to being the last line of defense. Ball continues his back pedal in coverage. Scandrick has already recognized the quick attempt to Brandon Lloyd and is closing fast. The entire Broncos line blocked right, indicating that the quick screen was the intended first read. 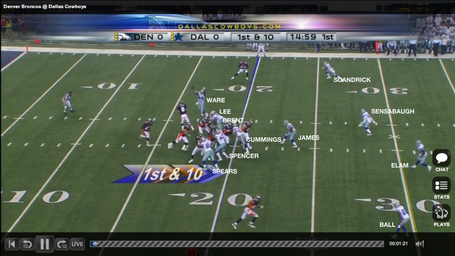 With the tight end helping out their right tackle, the formation resulted in the following matchups.

Marcus Spears being blocked by a tight end. Anthony Spencer blocked by the RT. Kenwin Cummings (I'm imaging Jay Ratliff in this role) was greeted by the RG and then the FB. The Denver C got upfield where he would be blocking Bradie James. The Broncos LG and LT took Brent and Sean Lee respectively, leaving one DeMarcus Ware unaccounted for and three yards in the backfield when Orton wound up to throw.