Signature Play: Felix Jones' Big Run And The Blocks That Sprung It

Share All sharing options for: Signature Play: Felix Jones' Big Run And The Blocks That Sprung It

As the 2010 season unfolded, Cowboys fans had to stand by and watch hopes of a Felix Jones breakout campaign evaporate before our eyes.  Bulked up for a chance at a feature role, it took after the season was well down the drain before Jones was able to wrestle away the majority of running back snaps. With compliment Marion Barber in Chicago, and himself slimmed down to 2009 weight, nothing appears to be in the way of 2011 becoming that breakout year for Felix. Well, nothing except for the blockers in charge of paving the way for him.

The Cowboys run blocking grades from 2010 seem to be a bit misleading. Pro Football Focus lists Dallas as far and away the best run blocking team, with a cumulative team grade of +51.7. Even more amazing was that there were only seven teams with a positive grade for the entire season! Looking closer though, three of the top five individual performances were by non-linemen; two tight ends and a fullback. We're not going to revisit the 2010 blocking any more than this, because it is time to look forward to what we have now.

What you'd like to see in a run play designed for Felix is the line to get enough push to have Felix at least two or three yards past the line before it's "his turn" to continue the play. Jones obviously has to employ vision and patience to find the correct hole and let his blockers do their job. If this happens on a regular basis, you can expect Felix to break away for large gains consistently, either via a broken tackle or a shifty move. We know he has the talent base to employ both on a regular basis.

The first preseason game only gives us a limited opportunity to see the starting unit together, but there were two big plays out of the first 10 snaps that might inject some giddiness into the fan base. Felix Jones was able to wiggle his way through the Broncos defense on a big run that potentially could have been much more.

Following the jump, we'll take a look at the screen shots that identify the successful execution of blocking assignments by the team.

The camera didn't show the all-22 look until Chris Gronkowski was already in motion from the weak side, but at the snap, the Cowboys were in an Offset-I with Witten lined up outside of Doug Free, Bryant at the top and Miles Austin in the Nnamdi Zone (my pet name as the Philly corner traditionally lines up on the QB's blind side on at least 80% of snaps). The screen capture only shows 10 Broncos Defenders, as their FS is 15 yards back. 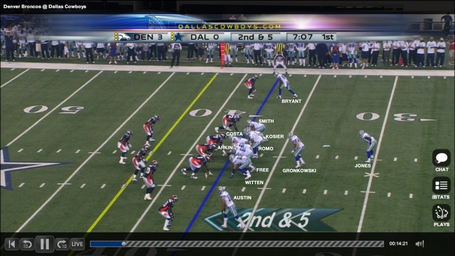 At the snap, RT Tyron Smith pushes the weakside DE wide and eliminates him from the play. C Phil Costa engages the DT and stands him up at the line of scrimmage. LG David Arkin engages the other DT, and appears to get away with a slight hold, as his left arm is on the outside. Nowhere near obvious enough to draw a flag however, as Arkin seals the hole. 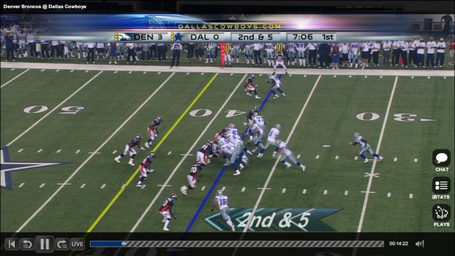 The strong side DE tries to collapse on LT Doug Free, but he's too quick and already into the second level of the Bronco's D before the handoff even takes place.

TE Jason Witten helps the DE follow his momentum and he now has his back to the play.

#20 S Brian Dawkins for the Broncos has a clean shot into the backfield, but with the play going up the middle and Felix' speed, he doesn't have a chance to make a play. The Cowboys left the correct man unblocked here. 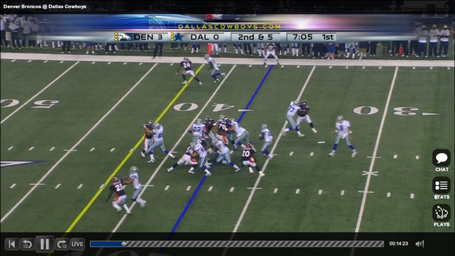 FB Chris Gronkowski takes his lead blocking directly to the Broncos OLB. RG Kyle Kosier has pulled from his right guard slot and catches just enough of Broncos LB #51 to spring Felix through the line.

I'm not going to state the obvious and say that Leonard Davis would have no chance of making it to this linebacker. Oops, I guess I am. Well now I guess I can mention that this lack of ability HAD to have handcuffed Jason Garrett's playcalling. 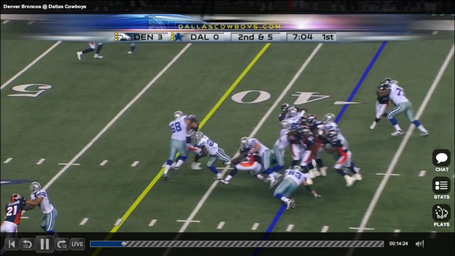 Witten continues to block his man into the scrum, and prevents any of the pile from making a play on the ball carrier. If Gronkowski was able to block his LB a little better, Felix would have been gone. As he didn't, the LB was able to get a paw on Felix and disrupt his momentum just enough. Look at the huge hole between Free and Austin's blocks. A full speed Felix sails through that for a 60+ yard TD. 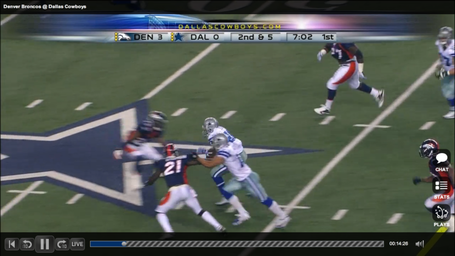 Still, Felix was able to put a stutter move on the free safety, and if it wasn't for the extra time it took to break out of the tackle, the CB assigned to Miles Austin would not have been able to make the TD saving tackle. 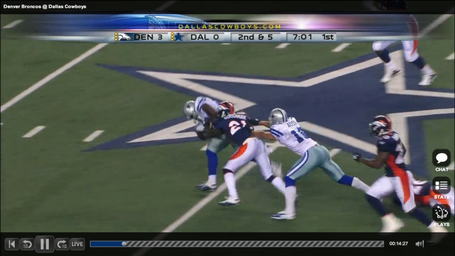