There's been a lot of talk about Dwayne Harris' performance Thursday night. Nay sayers will tell you that he only performed this well against the Broncos third stringers, and they'll be correct. However, the sixth round pick entered the game as the sixth receiver in the rotation, playing only after Miles Austin, Dez Bryant, Kevin Ogletree, Jesse Holley and Manny Johnson got their reps. I believe Harris' 5 catch, 127 yard, 2 TD performance warrants the accolades heaped on him, and earned him the right to line up against the Chargers "two's" next Sunday night. After all, a lot of third string receivers played over the last three days and I don't see any with Harris' line.

I decided I wanted to take a closer look at the former East Carolina Pirates' performance, and decided to roll out a new series for the preseason, "Tracking".  Let's take a look at each snap that the 5'10", 207 lb wideout was on the field for in his professional debut.

Harris makes his debut with 23 seconds left in the first half. He fielded a line drive kickoff and raced out the end zone, reaching the 33.

-- 2nd and 9 from their own 48.  2 TE's 2 WR 1RB, Harris on the right side. The cornerback is giving Harris a 10 yard cushion. Harris is either running a option route and chose the wrong one, or the wrong route altogether. QB Stephen McGee clearly expected Harris to read the cushion and run an out at the marker, but Harris continued up the field and actually turned towards the corner. Incompletion.

-- 3rd and 9 - 3 WR 1 TE 1 RB, Harris is in the left slot. Runs a drag at midfield and clearly has a step on defender, but Tysson Poots is deeper, past the marker and gets the pass.

-- 1st and 10 from Broncos 43.  2 WR 2TE, 1 RB, Harris out wide left on the strong side. 11 yard cushion.  At the snap the corner bails and Harris appears to run a go route (out of the screen). Harris turns to his inside shoulder, ball is delivered to what would've been his outside shoulder, but has a large area to work with and easily secures the 26 yard catch.

-- 2nd and 9 from the 16 - 2WR 2TE 1 RB, Harris wide right.  Runs a short in route, McGee delivers the ball slightly behind him but Harris makes the catch anyway. The corner, tries to reach over his back and strip the ball, but DH is having none of it. In the same motion, he ducks under back to back linebackers, and crawls forward for a couple extra yards.  He gets to the six yard line, just enough for the first down.

Follow the jump to track Harris' own two TD's.

-- 1st and 10 from the 20 -  2 WR 1 TE 2 RB, Harris is on the right side. Play action pass. Harris runs a post route and takes the safety and corner with him; also forcing the LOLB's zone deep enough to give Shaun Chapas room underneath. Pass goes to Chapas for a gain of 4. 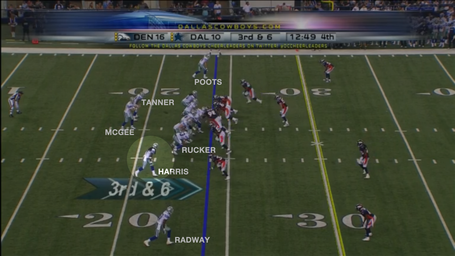 Shotgun formation with Tanner to McGee's left and Harris in the strong side slot. 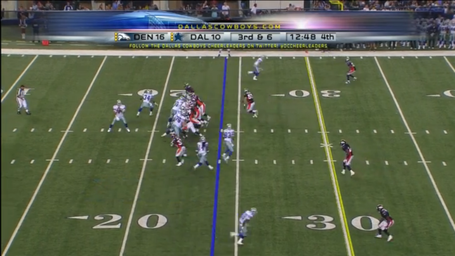 The corner checking Harris comes in on a blitz, as Harris runs an inside comeback right to the LOS, in front of a Martin Rucker similar route two yards deeper. 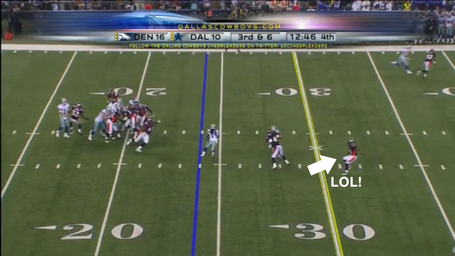 Rucker engages the DB that was supposed to move in and cover Harris, while the other defender slips trying to press up to the action. 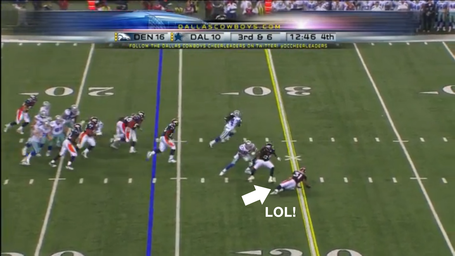 The slip is because he was already out of the play, he wasn't getting a hand on DH. 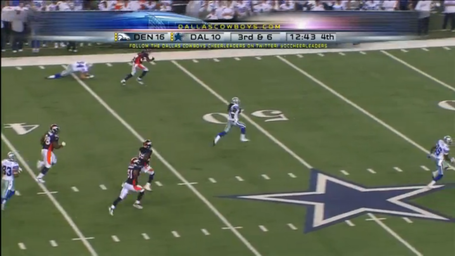 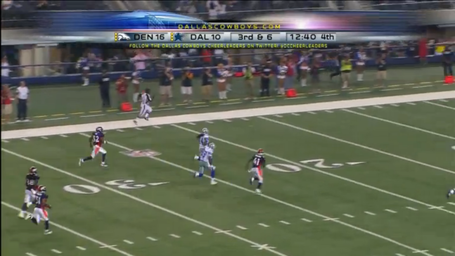 In fact, he wasn't touched until 76 yards later, when he had already dove into the end zone for his first professional TD.

For those that remember Harris almost getting caught from behind, you're misremembering, because he didn't. Once the corner that Poots was blocking reached full speed, Harris had a four yard cushion on him. That cushion remained through the end zone. The DB being blocked by Radway, #41, appears to have enough of an angle that if Harris was slowing down he could have caught him. He didn't.  By the way, #41 is Cassius Vaughn; he ran a 4.42 at his 2010 pro Day and has been clocked as low as 4.36.

-- 1st and 10 from from Denver 48 - 2 WR 2 TE, 1 RB. Both TE's to the right, Harris in the left slot inside Radway. Harris races downfield off screen, on the replay it appears that he is open in from of the safety and looking for the ball. Pass goes to Radway who cut off his route.

-- 3rd and 8 - 3 WR 1 TE 1 RB - Shotgun formation Harris in the strongside right slot.  Harris runs across McGee's face right past the LOS and tries to use the ref as a pick. Doesn't work as former Cowboy Nate Jones makes a good open field tackle for a 2 yard gain.

-- 1st and goal - 3 WR 1 TE 1 RB - Shotgun with Tanner left, Harris weakside right slot. Draw to Tanner, Harris tries to come in to block but play over before he arrives.

-- 3rd and goal - 3 WR 1 TE 1 RB -  Shotgun, Harris in weakside left slot. Harris runs to the goal line and turns inside, but McGee takes the sack. McGee gets up and immediate signals to Harris that he was supposed to go to the outside, where it appears he would have had room for the TD catch.

-- 4th and goal from the 12 - 3 WR, 1 TE, 1 RB - Shotgun with Tanner to the right, strong side, Harris in weakside left slot. McGee gives the slightest play fake that keeps the defenders eyes in the backfield. Harris runs a post route, turns inside and leaps to snare the catch in between two defenders (not in danger of being hit, but still). 12 yard TD catch for Harris.

-- 2 pt Conversion - 3 WR 1 TE 1 RB - Shotgun with Tanner left, Harris strongside right slot.  Harris runs an out to the near pylon, McGee scrambles and finds Rucker in the end zone for the winning points.