I was recently asked if I really can tell what assignments defenders have pre-snap or while watching the play develop. The honest answer is...not always, and rarely with unwavering certainty. Even after the action has concluded and you review the footage, it is often difficult to understand the entire design of the play. A defensive scheme is not a simple blueprint with the same results every time. It's a plan in motion, where the final product can vary greatly depending on the offensive formation and how the defense is attacked. So even after reviewing a particular play several times, and even if you can confidently identify what each player did, you still don't know if any assignments would have changed against a different formation or collection of passing routes...not to mention human error and a player possibly making a mistake and thus making it seem another was at fault.

The ability to decipher the design of a defense (or offense) is a trait that is coveted in quarterbacks, and usually a defining characteristic of great players. It is much easier to review the film and realize what a defense was trying to do, and another to do so in split seconds with adrenaline pumping, while the stadium is deafening, and the game is on the line. At this point, NFL players rely on weekly lessons, natural instincts, and lightning fast reasoning to react with confidence and as little hesitation as possible.

But for us mere mortals, we would have to review the footage a few times, and still remain uncertain. It's a reason I often use qualifiers such as likely, seems, appears, perhaps, and I think, etc. I am no expert, but perhaps I can help shine some light on how to decipher an NFL defense after the jump by breaking down some images from the Dallas Cowboys preseason game versus the Denver Broncos.

I recently wondered if Jason Witten was afforded an option route every time he went out on a pass. In that story, I described a particular play in the first drive of the offense. The following images are from that play. 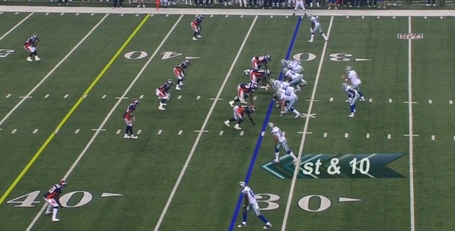 As I had described it:

Before the snap, Witten has read the field, likely making the same deductions as Romo, and can see the corner on his side is playing off coverage, the safety is deep, and the outside linebacker is likely assigned to cover him. At the snap, Kevin Ogletree and Witten go straight up the field. The corner has turned his hips and is playing man coverage over top, so the first read - Ogletree deep - is covered. Witten has run seven yards downfield, and now has his option.

Let me start off by saying I was wrong about the linebacker. The defense is in a nickel formation and I missed that there are actually two inside (nickel) linebackers and the other is actually the third corner covering Miles Austin in the slot.

In any case, before the ball was snapped (it seems to me that) the safety has a deep zone assignment. It is doubtful that he has man coverage but is 15 yards off the line of scrimmage, though could conceivably be assigned man duties to double the receiver on any deep routes. But in the picture you can also tell he has already started to backpedal, another reason to think deep zone. The corner is playing off the line as well, but at this point you can't tell whether he is in man or zone coverage. It is one reason coaches shift players or put them in motion. It is not only a way to confuse the defense and create mismatches, it can sometimes also reveal coverages as the defense shifts to rework their zones or a defender follows the motion and admits his man-to-man assignment. 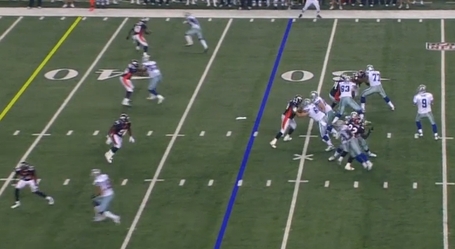 Now, the second picture helps provide some more proof. The corner has turned his body and created a lane between himself and the sidelines. The fact that he has his back to the rest of the offense is a pretty clear sign that he is in man coverage and can ignore the rest of the field. At this point in the play, Tony Romo should not (depending on the receiver-corner matchup) attempt to throw it over the top and hit Kevin Ogletree deep since the corner is in the best position to cover such a route.

After this play, I could not tell with certainty whether the linebacker covering Witten was playing zone or man. To some it doesn't matter, but I think he is actually playing a middle zone. The reason for such a guess...if the linebacker had underneath coverage or the flat, at the start of the play he would likely be moving towards the line and trying to bump Witten earlier in his route. It would likely be the same if he has man coverage, trying to get to and block Witten's route as early as possible. Instead, his first steps are out and back, trying to get over top Witten and not allow a quick pass up the seam and through his zone. But while identifying which of the two is nearly impossible, even before the snap it was safe to assume his assignment would end up having him cover Witten. The result of the play: Witten runs the best route to beat his coverage, possibly as part of an option route, and hooks back for an easy completion.

As I mentioned previously, sometimes you cannot tell the design of the defense after the play is over because someone made a mistake and it is unclear who is the culprit(s) of the blown assignment.

This is the point where I might have to eat my hat and apologize for spreading some misinformation. In an earlier story, I blamed Gerald Sensabaugh for Kyle Orton's best pass play in the preseason game. Upon watching the play again, I realized I might have made a grievous error and slandered Sensabaugh without cause. As the fates would have it, I didn't realize all this until I decided to show this play as an example of what Rob Ryan does to confuse quarterbacks so they have a more difficult time deciphering his scheme before the snap. It seems that Ryan confused me as well, and it's possible that Sensabaugh was not to blame.

This is the first look the defense shows the offense as they break the huddle.

This was my analysis of the play:

DEN in shotgun 3-WR set with the tight end also in the slot, and Ryan brings out a one down-lineman scheme (looked like Brent but tough to tell) with five linebackers and five defensive backs. The defense created tons of pressure. Ware was actually matched up and beat the right tackle and Orlando Scandrick was untouched on a slot corner blitz from the blind side. Orton would have been leveled if coverage didn't break down immediately.Gerald Sensabaugh blows his assignment and the slot receiver is left uncovered due to the corner blitz. Abram Elam playing deep safety (taking a bad angle by the looks of it) pushes the receiver out of bounds after 29 yard gain.

First, the defense is actually in a 1-4-6. Re-watching the play made me realize that what I thought was a linebacker was actually #40 Danny McCray. I hope you forgive me; I was fooled by Rob Ryan's organized chaos. Take a look at how different this defense looks like right before the snap. 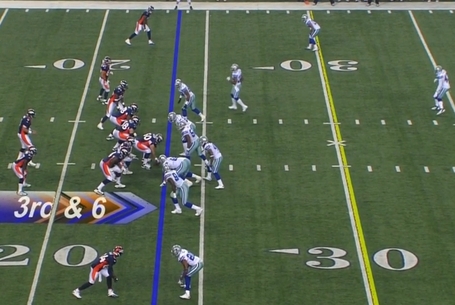 You will see that DeMarcus Ware and Victor Butler switched sides, McCray looks like an inside linebacker ready to blitz, and Orlando Scandrick has come around to blitz as well. Once I realized my first mistake, I then thought that blitzing two corners on one play may be overly aggressive, even for Rob Ryan. Originally I thought Sensabaugh must have forgotten Scandrick was blitzing and decided to play middle zone instead of covering the free receiver left by Scandrick's blitz. Take a look at the moment Sensabaugh seems to notice the open man and nearly falls over stopping his momentum to redirect himself. 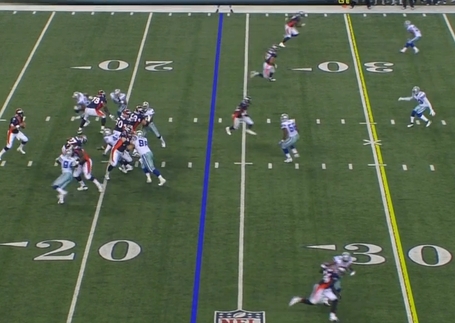 Looking back at this, perhaps Scandrick made the mistake and McCray was the slot corner that was supposed to blitz. But then again...perhaps Ryan did call a double corner blitz, and Sensabaugh is the one who blew his assignment. As I mentioned before, it is sometimes difficult to tell the design of a defense even after a play.

I am not infallible. Please never take anything I write as gospel. I do not think I am always right and welcome constructive feedback and criticism. I am a student of the game and love to write about it, but it doesn't mean I don't make mistakes.

But let's finish on a happier note. You want to know why a corner turning his back on the offense is likely playing man coverage?

This is the continuation of the play where Sensabaugh (might) have blown his assignment. Bryan McCann is the corner on the sideline covering the receiver (#17). At this point, the receiver with the ball Eric Decker (#87) has already gained five to ten yards after the catch...and McCann has no idea and is almost certainly covering his man...but you can never be quite sure.

I may not always be right, but I am not alone here at BTB, so if ever you have a question or you want to review a particular play in a Cowboys game, feel free to email me and maybe we can take a closer look.