Tracking: OL Bill Nagy Snuck In Under The Radar And Gets A Snap Review

Share All sharing options for: Tracking: OL Bill Nagy Snuck In Under The Radar And Gets A Snap Review

Imagine with me, class. Imagine that Jason Garrett just fixed the youth problem along the Cowboys offensive line in a single draft. With our recent track record, shouldn't that be worthy of auto-induction into the Ring Of Honor? I kid, obviously, but as far as preseason storylines go, this one is getting juicy, very quickly. Yes, it is only one game. One lousy, mean-nothing preseason game... I get that. But you know what good early reports are better than? Bad early reports.

Cynics can be as negative as they want to be, prerogatives are unique. However, me and the optimists over here will go ahead and hope that the positive reports lead to continued, and rapid, progress. It seems like it's more fun this way. The early camp positive reports haven't included a late round flier, former Badger OL Bill Nagy who was drafted in the seventh round. Nagy played up and down the line at the University of Wisconsin, after losing his job due to injury.

The draftniks here saw value in the pick, as this one had conditions that came with it. Wisconsin consistently churns out quality offensive linemen. If there was a stud youngin' that stepped in for Nagy and didn't give up his spot, that doesn't directly speak to Nagy's abilities. Not much is expected out of a seventh-rounder, so no one is showing surprise or disappointment that there hasn't been much to speak of in regards to Nagy's play thus far in camp. Until gameday that is.

Head coach Jason Garrett has shown that he is completely committed to making players earn their keep. So when he moves Bill Nagy up to first string following the Denver game, it isn't only because he wants to shake things up. Nagy had to do more than a few things correctly in the preseason opener to warrant the bump. If not, Garrett would be undermining his message and he seems far too competent to do that. The coaches have said not to read into the promotion as permanent or even signs of who will start against San Diego on Sunday, and we won't. But with that, I figure we should take a second look at Nagy's performance in the 24-23 victory over Denver. What is it that Garrett and line coach Hudson Houck saw in Nagy's debut that earned him some accolades?

Follow the jump for a play by play on Nagy's performance.

(Opening Drive of 2nd Half)

1st and 10 from their own 10 - Playing center. Run play up the middle, he blocks the DT to his left shoulder as the LG pulls to the right side. Stands DT up initially, then appears to give some ground. Cannot tell if his leg is knocked from under him, but he falls backwards with lineman on top of him. Miller was already stopped, Nagy's man finished the job. Push~Positive

2nd and 10 - Shotgun snap. Nagy first chip doubled the RDT, released and went into the LDT before he was able to gather any momentum.  The RG then came back and helped Nagy double the LDT successfully. RT Sam Young got beat badly and McGee was flushed out the pocket, threw the pass away. Positive

3rd and 10 -  Shotgun snap. Broncos only rush four and drop into a zone. The Cowboys interior triple team the LDT successfully, time for McGee allows Ogletree to settle in between two defenders. Pass complete to Ogletree for first down. Positive

1st and 10 -  The entire line blocks down as the Cowboys fake a run to the left and bring McGee back around the right on a bootleg.  Nagy punched his man in the direction he was moving. He then connected on a second punch, but was the one to go to the ground, the play long gone to the other side of the field. Incomplete pass. Barely Positive.

2nd and 10 - Misdirection run with Miller, Nagy again matched up on Ty Warren one on one and held Warren at the line. Run only for one yard but Nagy did his job. Positive.

3rd and 14 (after a Parnell FS) -  Shotgun snap. Gets help with DT initially but left one on one. McGee runs to Nagy's right, DT pushes Nagy back and gets a hand on McGee slowing him down. McGee wouldn't have gotten much more even if untouched as defenders were waiting. Gain of 8, would be 4th but penalty on DEN gives Dallas a first down. Barely positive.

1st and 10 from the 31 - Run play again, matched up against Ty Warren again. Keeps Warren engaged as run goes to the right where Miller is bottled up after two yards. Released Warren probably a bit too soon, but was inconsequential to the play. Push.

2nd and 8 - Pass play from under center - Nagy gets double team help on Ty Warren and keeps the pocket clean for McGee, completed pass to Ogletree for 11 yards and first down. Positive.

1st amd 10 from their 44 -  Nagy gets lost in the scrum but comes up searching for someone to block while the right side of the line relents pressure on McGee (who throws the ball away.. Cannot truly dissect where his responsibility was, but blocking no one when there's pressure is probably a bad thing. Negative.

2nd and 10 - Shotgun snap, draw to Phillip Tanner. Nagy and RG double team the DT, then Nagy releases and gets to the second level.  He does not get to the next defender quick enough, arriving as he hits Tanner after a 6 yard gain. If he was a fraction earlier, could have sprung Tanner for more yardage than the six yard carry. Push.

3rd and 4 - Shotgun snap. Nagy's assignment appears to be chip Warren (barely done) and then help on the other DT. Warren puts a swim move on LG Kowalski and gets pressure, but Tanner doesn't pick up blitzing safety who arrives at McGee first.  McGee gets away incomplete pass. Push.

2nd and 6 - Run play from under center. Nagy has no DL to block and explodes to the second level to engage a LB. Tanner darts through the line running to Nagy's left and makes it to Denver 48 for a 13 yard gain. Big Positive. 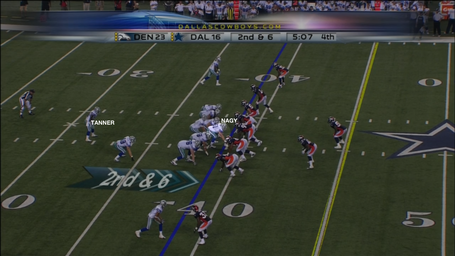 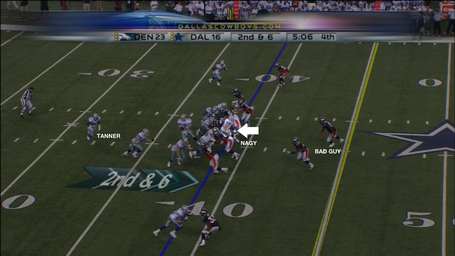 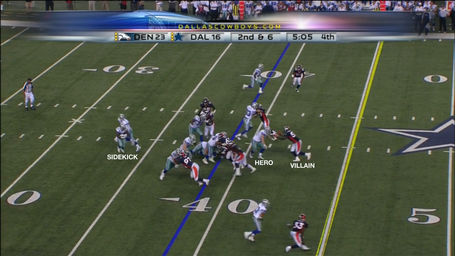 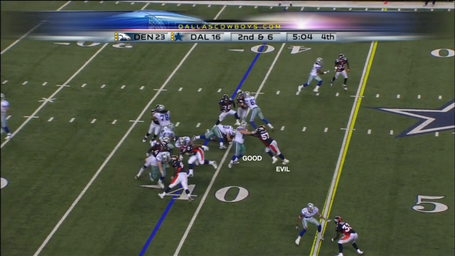 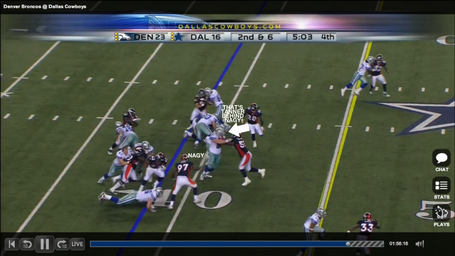 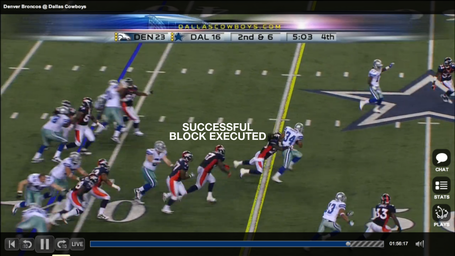 1st and 10 - Pass protection, play from under center. Nagy's first responsibility is on DT, but the DT then loops around to the left side. Nagy immediately turns and doubles the DT coming to fill the vacated space. They do a great job pushing him out, McGee and Radway have miscommunication but pocket was protected from up front. The DT that looped causes pressure from the left side. Positive.

2nd and 10 - Run play from under center - Nagy stands his man up and holds him at the line while Tanner goes off left tackle and inside a great block by rookie FB Jason Pociask for a gain of 11. Positive. (hat tip to fuji1232 for the Pociask identify)

1st and 10 from the 38 - It appears the call is for Nagy to reach the second level and the DT's are to be blocked by the guards, but is unsuccessful. Nagy gets to the second level but doesn't demolish the LB, who would have made it to Tanner if the play wasn't dead already. Gain of 2. Barely negative.

2nd and 8 - Shotgun snap. Broncos only rush four, leaving no one for Nagy to block. Incomplete pass to Radway. Push.

3rd and 8 - Shotgun snap, Broncos bring five. Nagy double teams the DT with the RG and gets pushed back some. Not enough to allow pressure on McGee, quick crossing route to Harris for gain of 2. Barely Positive.

4th and 6 from the 34 - Shotgun snap, again Denver brings five and again Nagy is double teaming the DT. Much more solid ‘ground' than previous play. Three step drop, plant and throw, quick strike to Martin Rucker for a 28 yard gain and first down. Positive.

1st and goal from the 6 - Shotgun snap. Nagy appears assigned to get to second level, but LG Kowalski doesn't get hands on his man, nor does slot receiver Dwayne Harris. Their men combine to make a tackle in the area Nagy vacated. Push.

2nd and goal - Shotgun snap. Nagy pushes the DT off to the pocket's left, as McGee steps up to avoid pressure from the right and fires to Rucker. Gain of 1. Positive.

3rd and goal - Nagy starts off with a chip to the RG's DT, then comes back to try and help Kowalski who is getting bull rushed into the backfield. Nagy's punch actually helps the DT's momentum toward McGee as the pocket collapses, McGee was expecting Harris to go to the outside, and that bad route lengthened the play, but the line broke down here. Negative.

4th and goal from the 13 - Shotgun snap, Broncos put 8 in coverage only rushing 3. Nagy has no one to block, but RG lets a man through on a swim move. Complete over the middle to Harris for the TD. Push.

As you can see, Nagy acquitted himself fairly well on the two drives tracked. The first two scoring drives (Nagy's 2nd and 3rd series) were similar in that there were plenty of Pushes and Barely Positives mixed in with some Positives and only a handful of Negatives. There is room for improvement, but there was nothing that showed Nagy was overmatched by the Broncos, and that included several matchups with veteran DT Ty Warren. While I can see the promise that coach Garrett sees, I don't know if he exactly earned first team reps with this performance, but he clearly was the most consistent linemen of the third stringers.

I am by no means an offensive line expert. I don't even normally pay extremely close attention to the big uglies, so I'll need to do further study to do a comparative evaluation; that's saying I can't grade this on an Andre Gurode/Phil Costa curve just yet. I can't look at a play and know what the assignments are for each of the players, and don't even know if that level of evaluation is possible for anyone to know without insight on the playbook. I'd love for our BTB line experts to chime in here. Regardless, I hope this breakdown allows the reader some more insight to make their own evaluations on the seventh round pick. I imagine there are more than a few that are hoping the same as I, that Jason Garrett is Mr. Fix It, and in one draft picked up the three final pieces to the youth revolution that is starting with Doug Free and Phil Costa.