First round pick Tyron Smith has handled himself very nicely in the first two preseason games. There are growing pains however, and as Tony Romo's clavicle can tell you, it doesn't take many rookie mistakes to ruin someone's season.  All of the reports on Smith's performance have been positive, but the short summaries do tend to gloss over some of the details. With a game going at full speed, it's pretty difficult for most fans to get a firm grasp of a lineman's performance, myself included. Hopefully, this play-by-play recap will help you better visualize Smith's progress so far this camp.

I'll mention a couple of the generic themes that I noticed. The Cowboys seemed to telegraph their plays based on their sets initially. For the first six plays, if they gave Smith help, then it was a run or a screen. With no Miles Austin, sitting out the game nursing a hamstring, the Cowboys employed the two tight end look a lot. A whole lot. 20 plays, 9 two-TE sets, including 8 out the Jumbo package (1 WR, 2TE, 1 FB, 1 RB).

Follow the jump for the play-by-play for Tyron Smith while Tony Romo was at the helm. Use the comments if there's anything that you saw differently, or in the remaining time Smith was in the game.

1st and 10 from their own 17 - RT Tyron Smith. The Cowboys open up in a Jumbo package with both tight ends on Smith's side, plus Chris Gronkowski in the game. Run right for 7, Tyron lets the blitzing inside LB run right past him. The blitz was well timed, but Smith's reaction time was lacking. LG Bill Nagy is pulling on the play and gets over in time to prevent a huge loss. It appears Nagy was to seal the edge and would've sprung Felix at least to the safety level if he didn't have to cover. Negative

2nd and 3 - Pass play 2 WR, 2 RB. No TE help for Smith who does his job and pushes the edge rusher past the pocket. LB Gamble looks like he's on roller skates for a split second. Other linemen allow pressure on Romo and he is dumped while throwing a incompletion.  Positive

1st and 10 from the 20 - 2 WR, 2 RB, 1 TE to Smith's side. Screen pass to SE Bryant. Smith engages the 3-4 DE Luis Castillo, but lets him go and allows pursuit of the play. Castillo is actually first to make substantial contract on Bryant before tackle is made by Larry English. Gain of 6. Negative.

2nd and 4 - TE to Smith's side. Run play. Smith engages Castillo then with one arm continues to push Castillo into the middle. Misdirection play, run starts left then comes back into open area cleared by Smith and Bennett. Gain of 7. Positive+

1st and 10 from their 33 - Cowboys come out in Jumbo left, bringing Witten in motion then back to his original spot.  Smith punches the OLB and hands him off, then goes to engage Castillo. FJ makes a block on the other DE that buys Romo time for the completion to Witten. Positive.

2nd and 4 - TE to Smith's side, 5 step drop by Romo. Smith punches Castillo but can't engage him. Castillo gets nowhere near Romo. Pass complete for 6. Push.

1st and 10 from the 45 - TE to Smith's side. Screen left to Bryant. They go off screen, but it appears that Smith remains engaged with Castillo. Slight positive.

2nd and 3 - TE help for Smith. Pass play, Smith and Witten double on Castillo, though Smith is doing much of the work. So much so, Witten kind of peels off seeing that Smith has it covered. Play action right, Romo has a big pocket, gives a pump fake that fools no one and throws into coverage. Interception. Positive for Smith.

(Up 10-0, San Diego subs in their 2's on the D-Line. LB's and Secondary still 1's. Garrett let's Smith fight on his own when this happens)

1st and 10 from the 20 - No TE to Smith's side. Screen pass left to Ogletree. Smith remains engaged with his man then dumps him off. Gain of 14. Slight positive.

1st and 10 from the 34 - Jumbo left set. Run play to the left, Smith stones the LDE #92 Vaughn Martin for the 2nd consecutive play.  Felix makes the DB miss badly, and a pulling Kosier seals off the play, allowing FJ to get outside for 22 yards. Positive.

1st and 10 from SD 44 - Jumbo left again. It appears that Smith blocks the wrong man here. The way that Chris Gronkowski attacks the middle, although he does cast doubt about his ability to make the correct read I'm inclined to think that was his task. The edge rusher gets into the backfield and Felix puts an ole on him to get free. He then gets hit after 6 yards and drags two Chargers for five more yards and the first. Felix saved Smith (I think) from a huge mess up, he could've been hammered. Negative+ 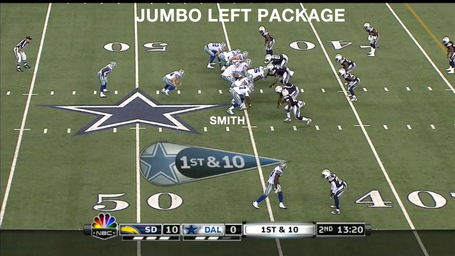 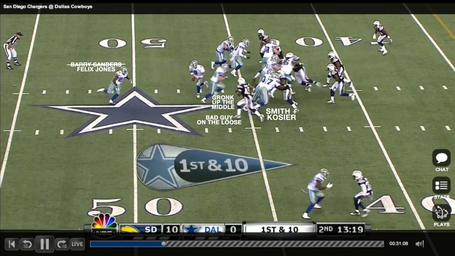 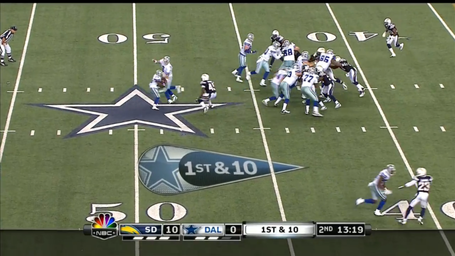 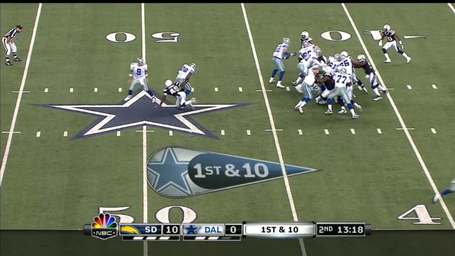 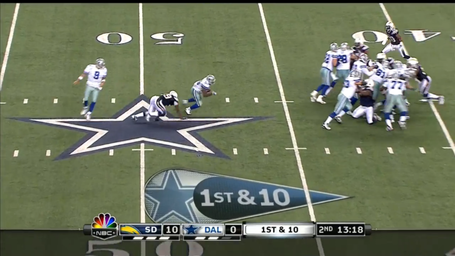 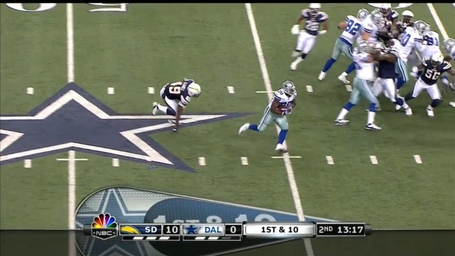 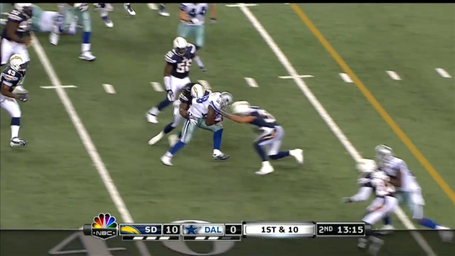 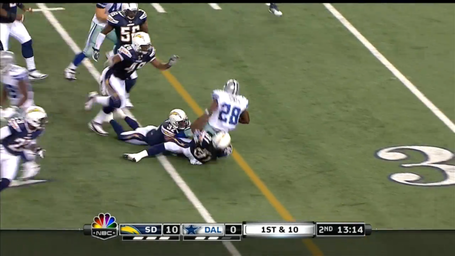 1st and 10 - Greg Manusky is tired of being pushed around, and puts the D Line 1's back in the game.  Garrett gives Smith help.  Balanced Jumbo set.  Smith engages Castillo by himself and keeps him as the FB run goes left for 3 yards. Positive.

2nd and 7 - 2 WR, 2 RB, TE to Smith's side. Pass play, Witten goes on a route. Smith punches Castillo and keeps popping him forming the right side of a pocket. Romo swing pass to Lonyae Miller to the right side for a first down. Slight positive.

1st and 10 from SD  21 - Jumbo right this time. Smith and Bennett double Castillo initially, Smith quickly turns his attention to the LB, who he doubles with Witten. Smith stumbles a bit on the block, if the play had continued he wouldn't have been able to help. Slight negative.

2nd and 7 - 2WR, 2RB - No TE to Smith's side. Smith blocks Castillo until Gronkowski shows up to take him, although no one breaks free, Felix decides the right is too congested and cuts back left for a gain of four yards.  Smith's initial pop is on display, he won and did the job in his matchup. Positive.

3rd and 3 from the 14 - Cowboys roll out the 12 formation for the first time in the game, both TE's to Witten's side. Bennett goes in motion left to show a balanced look.  Smith just has to punch the OLB once as a quick pass to the left picks up a first down. Positive.

1st and goal from the 9 - Jumbo left.  Smith's job is to close off the back side of the play and keeps the backup OLB out the play. In fact, Smith almost wipes out all evidence there was a rusher. The line did an outstanding job creating a lane for Felix to get onto the safeties, but unfortunately that safety was a currently healthy Bob Sanders. If Gronk's assignment had him leading Felix up the hole, it's a TD. Positive. Let's go to the pics. 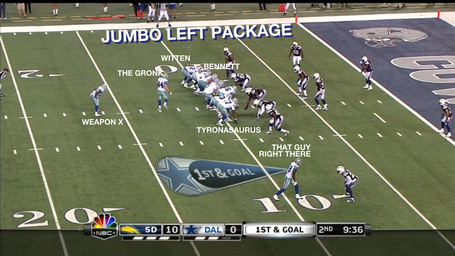 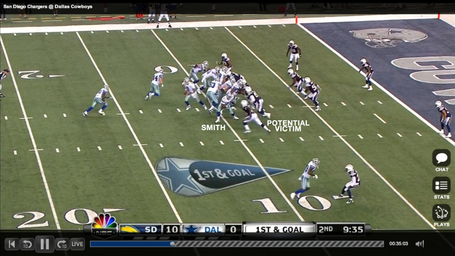 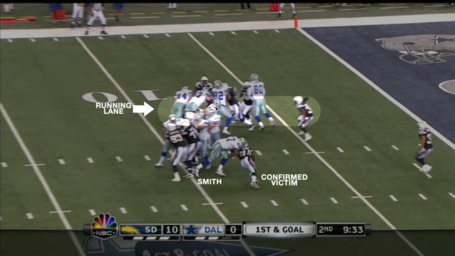 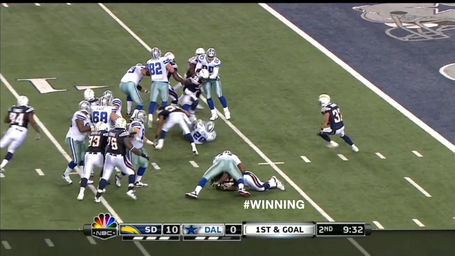 2nd and goal from the 6 - Jumbo right, play action left completely fools the line. Smith just pushes a guy in his back as he was bailing. Naked bootleg and Bennett drops a TD pass. Push

3rd and goal. 3 wide, with Witten next to Smith before he goes out on route. Smith engages the OLB as Kosier loops behind him to pick up the looping DE Castillo. Romo has an amazing six seconds to find Witten in the back of the endzone on the ‘thumbs up' play. Touchdown. Positive