Share All sharing options for: The Audacity to Hope...Cowboys Offensive Line Woes Cured

Prepare the rotten eggs and tomatoes, and herald this a holiday for mobs of critics. For here, today, I have the audacity to proclaim with joy and hope that the Cowboys offensive line woes are coming to an end. The corruption that has led to an ailing and aging offensive line has found a cure. A persistent issue with limited relief over the better part of the past decade may have been on the top of Jason Garrett's list, or perhaps the remedy is based on the overall culture change emanating from Valley Ranch, but either way (likely both), there are plenty of reasons to hope that new philosophies to teambuilding have revitalized the depth charts for the offensive line.

Now, before you reach for the pitchforks and light the torches, let me make this clear. This old wound is healing, not yet fully healed. As Jason Garrett would say, it's a process that requires the right kind of guys taking the proper approach to getting better every day. And Sunday, there were plenty of moments during the SD@DAL preseason game that revealed some of the progress that has already been made to solidify the offensive line, not only for 2011, but also for the years to come.

This is just as much a result of coaching and management as the players that were drafted, released, and re-signed. The reasons to hope include both the performances of rookies during the preseason as well as the opportunities provided for rookies to start, and then the free agent (re)acquisitions and their respective contracts. There are certainly improvements that need to be made by the team as a whole, but let's look at some signs that lead me to believe the common offseason motif - the age of the offensive line that threatens the team's performance late in the season (in 2010 throughout much of it) and the need for the Dallas Cowboys to improve the depth along the line - will not be repeated.

This did not all happen overnight or in just one draft. In fact, it hasn't actually happened yet, but it is a work in progress. I believe one day we will look back to the 2011 draft and offseason and the new Garrett regime as the turning point when the Cowboys offensive line ceased to be a liability and/or collection of free agents overpaid in desperation and unmotivated by the lack of competition. It will also be the time when the classic image of the great Cowboys linemen begins to take a new shape, a less massive and more mobile squad, but equally effective for the designed scheme. It seems it will also be a time of wiser contract management...perhaps even the passing of the torch to Stephen Jones.

I have observed too many promising signs, and am thus emboldened with the audacity to hope for many great things in this new era for the Dallas Cowboys, but perhaps none are greater than the hope for a rejuvenated o-line.

Let's review some earlier evidence that preempted this new style of building the offensive line.

For the first time since Jerry Jones became owner and general manager of the Cowboys (22 years ago) the franchise selected an offensive lineman in the first round of the draft, a Top 10 pick no less. Three offensive linemen were drafted, and another two undrafted rookies were signed and are getting reps at camp and the preseason games. The burdensome contract with low returns made Leonard Davis expendable, even without a big name free agent to replace him. Top free agent priority Doug Free was re-signed to a friendly contract, especially considering...

Leonard Davis averaged about $7mil a year during his time with the Cowboys.

Doug Free was re-signed to a deal worth about $8 million a year.

Joe Thomas is arguably better, but his new contract with the Browns will pay him 50% more at about $12mil a year.

And now, an experienced and out of shape veteran is about to lose his job to two different rookies, and at least one rookie (though I would guess two) will make the starting lineup...When was the last time you saw such competition along the offensive line in Dallas?

Even Jason Garrett's simple idea was a breath of fresh air, as he started Bill Nagy in Week 2 of the preseason to see if the Week 1 performance versus the backups would carry over against starters. As a head coach, Jason Garrett is not afraid to teach and challenge rookies to fight their way onto the starting lineup. The approach is already paying dividends.

Sunday night versus the San Diego Chargers, the fates were in a kind mood and irony brought with it a pleasant surprise. Tyron Smith has not allowed a sack this preseason and has been doing a great job versus NFL competition, but one of his few mistakes in the second preseason game provided Bill Nagy the opportunity to shine and make one of his best plays of the night. In fact, it was the first play of our first offensive drive.

The Cowboys lined up with two tight ends strong side right, motioned the fullback to an offset I-right, and handed the ball to Felix Jones. Versions of this play design are becoming a staple in Garrett's offense, but this time Chargers timed a blitz perfectly and Tyron misses the linebacker rushing to his inside (side note: while most rookie tackles struggle with speed rushers, Smith's mistakes have usually been a missed pickup due to poor recognition which leads to getting beat on the inside).

However, instead of a loss of yards, Bill Nagy becomes a hero. His original assignment was to pull right from the left guard position and help seal the running lane, yet he had the ability to make the quick adjustment to make the saving block in the backfield. It was a great display of balance and upper body strength, as he managed to get there and use one hand to legally de-cleat the blitzer. The 7th round pick saves the play from the mistake of the #9 overall draft choice. Even better, though Tyron Smith missed his assignment, he never gave up on the play and redeemed himself by picking up Martellus Bennett's missed block. This play will remain a defining moment in my mind as I remember the 2011 start of the youth movement along the offensive line. Take a look. 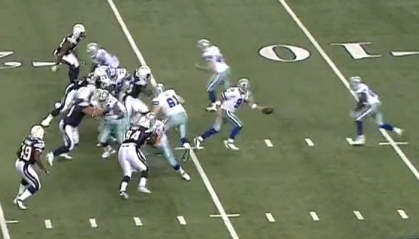 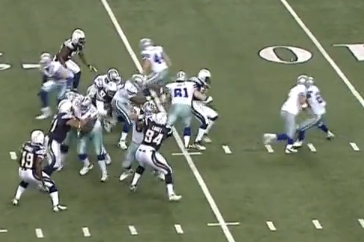 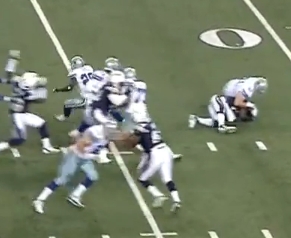 The young offensive line had a good night, though it certainly wasn't perfect. Bill Nagy played both at guard and center (where he lined up during Week 1) and has shown he can play great versus backups and more than hold his own versus starters. If he can manage to keep his leverage lower by bending his knees more he will help him drive block better, but he seems very good at reading pressure packages and finding his proper blocking assignment. The Cowboys must be happy with the young depth they suddenly have to bolster their interior line. Phil Costa is also improving, and coach Woicik will do wonders for Costa's potential moving forward as all he seems to lack is some more strength and conditioning. But it seems to me that Nagy will be pushing Costa for the lead backup at center - Andre Gurode should certainly start looking in his rear view mirror - and suddenly David Arkin is fighting for the starting guard spot though the competition isn't Montrae Holland.

Scoring only by the events of the Week 2 matchup, David Arkin lost some traction and Bill Nagy has earned more reps with the starters. It is not odd that Arkin had a worse night as a backup than he did playing with the starters last week. First, playing alongside starters will help you play better even if the competition is stronger because the line works as a unit. However, the biggest factor was the first round draft choice for the San Diego Chargers that played the entire game. Keep an eye out for Corey Liuget this season. He will be a handful for opponents, even Doug Free had some issues, and Arkin got beat by Liuget who forced a sack-fumble. Arkin also lost a matchup earlier in the game that was the leading factor to Jon Kitna being sacked. But other plays should not go overlooked, where Arkin did a great job controlling Liuget and passing off assignments against a couple of stunts quite well. He even notched a couple of pancake blocks in the running game.

Besides the three young interior linemen, there are of course Doug Free and Tyron Smith as the tackles. Little needs to be said. This duo will soon become a juggernaut force for the Cowboys offense. As an added bonus, Kyle Kosier seems to have tapped into this fountain of youth and has found fresh legs and is still making great blocks while on the move. The only disappointment for me along the line is the play of Sam Young. He can certainly take some time to improve, but he seems to have very slow feet to play at tackle in the NFL. Jermey Parnell is a different story. The former basketball player has good balance and footwork, but is sometimes outmaneuvered or overpowered as he leans to catch up to edge rushers. However, I think Parnell will be the third tackle on the roster and is a reliable backup right tackle this season.

There will be growing pains with a young offensive line. So as I said before, this is a work in progress. The remedy has been given but there will still be some recovery pains during the rehabilitation process. But the debilitating psychosis, the one that led to poor evaluation and neglect of the offensive line, appears to be fading into a bad memory. This young group of offensive linemen bodes well and speaks volumes about the effect of Jason Garrett as a head coach and team builder, and the new Cowboys culture.